LOS ANGELES (Variety.com) – Woody Harrelson and Justin Theroux are teaming up for an HBO limited series about the Watergate scandal, Variety has learned.

The five-episode series is titled “The White House Plumbers.” It tells the true story of how Nixon’s own political saboteurs and masterminds, E. Howard Hunt (Harrelson) and G. Gordon Liddy (Theroux), accidentally toppled the Presidency they were zealously trying to protect. It is based in part on public records and the book “Integrity” by Egil “Bud” Krogh and Matthew Krogh.

“We’re excited to bring together such a talented team to take on this fascinating look at the internal machinations that brought down the Nixon White House,” said Casey Bloys, president of HBO Programming. “We’re especially happy to welcome both Woody and Justin back to HBO and are looking forward to getting started.”

The show marks a return to HBO for both Harrelson and Theroux. Harrelson starred in the Emmy-winning first season of “True Detective” at the premium cabler, as well as the HBO original movie “Game Change,” which detailed Sarah Palin becoming John McCain’s running mate in the 2008 Presidential election. Theroux starred in the critically-acclaimed HBO series “The Leftovers,” which ended its run after three seasons in 2017.

Harrelson is primarily known for his film work, though he was nominated for six Emmys for playing Woody Boyd on the classic sitcoms “Cheers” and “Frasier,” winning one in 1989. He has been nominated for three Academy Awards throughout his career for his work in the films “The People vs. Larry Flynt,” “The Messenger,” and “Three Billboards Outside Ebbing, Missouri.” He is also known for his starring roles in films like “Indecent Proposal,” “Natural Born Killers,” and “Zombieland.”

Theroux recently signed on to star in the Apple series adaptation of “The Mosquito Coast,” which is based on the novel by his uncle Paul Theroux. He won an Emmy earlier this year for executive producing the ABC special “Live in Front of a Studio Audience: Norman Lear’s ‘All in the Family’ and ‘The Jeffersons,’” which starred Harrelson as Archie Bunker. He also had a main role in the Netflix limited series “Maniac,” which debuted last September. His other notable roles include the films “The Girl on the Train,” “American Psycho,” and “Mulholland Dr.” 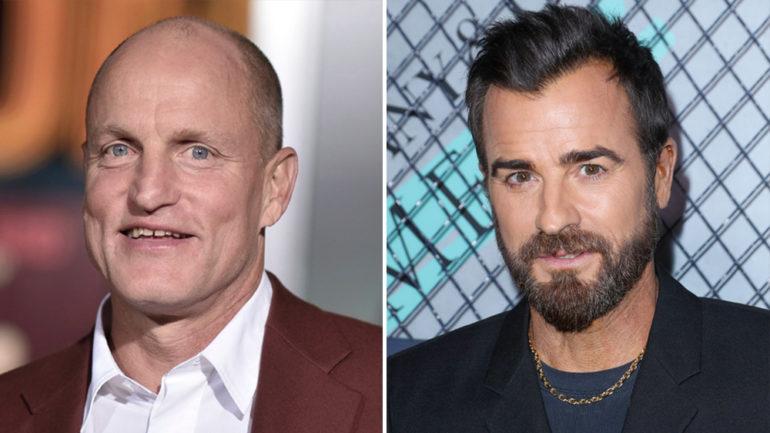