Why Tom Steyer’s Spending $100 Million to Run for President

LOS ANGELES (Variety.com) – Tom Steyer, the billionaire former hedge fund manager, has become the Democratic Party’s answer to the Koch brothers in recent years. In 2016, he spent nearly $90 million — more than anyone else on either side of the aisle — on a grassroots effort backing Hillary Clinton and other Democrats.

He is back, only this time, he’s running for president. Steyer joined the race in July, saying he planned to spend at least $100 million on his campaign. He has been flooding the TV airwaves in early primary states, where he is polling consistently ahead of candidates like Cory Booker, Beto O’Rourke, and Julian Castro — though he is still in the low single digits.

Steyer argues that his experience in state-level politics makes him uniquely suited to the presidency. For a decade, he has funded California ballot initiatives to boost school funding and hike the cigarette tax, and he helped beat back an effort to repeal the state’s cap-and-trade system. He has funded a national group to seek action on climate change, and made a name for himself in 2017 by running ads calling for President Donald Trump to be impeached . As president, he says he would institute a national referendum system, exporting California’s model of government nationwide.

Steyer participated in his first debate last week, and has already qualified for the next one on Nov. 20. But many still wonder why he’s running — and whether his money could be better spent elsewhere.

Steyer sat down with Variety at a hotel room in Carson, Calif., on Wednesday, to explain why he decided to make his first run for office.

I’m sure people have lots of different ideas about how you could spend your money rather than on your own campaign.

They have many, and always have.

What do you say in response to that, when people say you should pay off all the fines for the voters in Florida, or you should do X, Y or Z other thing that would be, they argue, more effective for achieving your goals?

There was a story in the New York Times about Democratic folks being worried and the jitters setting in. Is that why you decided to run? You looked at the field and said there’s not anybody here who I can see who can beat Trump?

No. The first two debates happened before I decided to run. I thought I was hearing a lot of thoughtful policy discussions about important policies, but no one was talking about what I thought the true question is in the United States, which is: How are we going to break the fact that corporations have bought our government? We have a broken government in Washington, D.C. Corporations own it. We’re not getting any of those policies until we break their stranglehold. And secondly, we actually have to deal with climate. And it doesn’t mean having a plan that isn’t gonna happen. We actually have to deal with it. What are we going to do about that?

On corporate control, obviously that’s been a centerpiece of (Sen. Bernie) Sanders’ message for a long time, and (Sen. Elizabeth) Warren’s campaign as well. Do you feel like you’re coming at it from a fundamentally different angle than they are?

Sometimes, in talking to donors, they have a more acute firsthand sense of the corruption of the way campaigns are financed than even the most cynical layperson. Is that the approach you come at it from, as someone who’s seen it firsthand, has witnessed the way the system works and sees it as something that can’t be sustained?

It’s different actually. The reason I feel so much how it’s corrupt is seeing how policies get made in the legislatures. There was a student borrower’s bill of rights that I was pushing this spring. And I knew that the lobbyists from the banks and the servicing companies had been in the offices of all these state legislators and state senators every day for weeks. Lobbyists have told me, “We know how to do this. We know exactly how much money to give to which people in advance. And then we know how to bring home the bacon.” They say that. If you look at what’s going on — we pay 10 times more for insulin in the United States than they pay in Canada. There’s also a law that says you can’t go to Canada to buy it. There’s also a law that says the United States government cannot negotiate prices with drug companies. Really? Isn’t that amazing?

You sound very much like — Bernie Sanders would say the same thing. Elizabeth Warren would —

Except for one thing. If you think that’s the problem, then you should ask yourself who actually can be trusted to break the stranglehold? Is it someone who’s done that successfully for 10 years, or is it someone who’s inside the system? You really should ask that question.

This is the difference — the outsider versus the insider.

I actually have a history of winning. I’m not just talking about it. We’ve done it consistently for 10 years.

Jane Fonda is a friend of my wife. They do a lot of work together. It’s so funny — Jane is, I believe, 81 years old. Feisty as hell. Does the work. Is very smart. Highly idealistic and principled. I give her a ton of credit.

Obviously Gov. (Jay) Inslee was the climate candidate for a while. He pushed a lot of people to increase their commitments on that issue. How do you come in and say “I’m different” when everybody has been bid up into the trillions of dollars?

They can’t pass anything. I’m in a completely different place on climate than everybody else. I have a history of actually fighting and winning on climate, which no one else has. Priority one — no one else will say that. State of emergency on day one. Use the powers of the presidency because we’re out of time.

Impeachment. You were way out in front on that, and everybody has caught up with you now.

No, they haven’t. They’re for impeachment. I’m for all these hearings being out in the open. I see this completely differently from the way they see it. To me this is about the American people. To them it’s about Washington, D.C.

(The Republicans) are obviously lapping the Democratic field in terms of fundraising at the moment, so that’s caused a lot of concern. Do you feel like Democrats will be well enough financed to actually take the fight to him next year?

At the end of the day are you committed to supporting the Democratic nominee and doing it in the way you’ve done in the past?

You put in many tens of millions to support Hillary, so people are looking to you again.

That was really about registering people and going door to door. That was really about grassroots organizing. That’s what I believe in. That’s why I care about impeachment. I believe the American people were right on impeachment, not the people in Washington, D.C. I believe they were insisting on it two years ago. I was there with them. People in the United States knew he was a crook. People in D.C. thought it was a matter of political expediency.

What’s your prediction on impeachment?

He’s going to get impeached.

But is he going to be removed?

Depends. If they do televised hearings, and show the American people… To my mind, the only way this is fair, the only way it works, and the only thing I believe in, is let the American people’s voice be heard. If they put it on TV and people get a chance to see what really happened, they get to see what is now going on behind closed doors? I’ve traveled around this country. They’re decent people. They’re going to upchuck.

This interview has been condensed and edited. 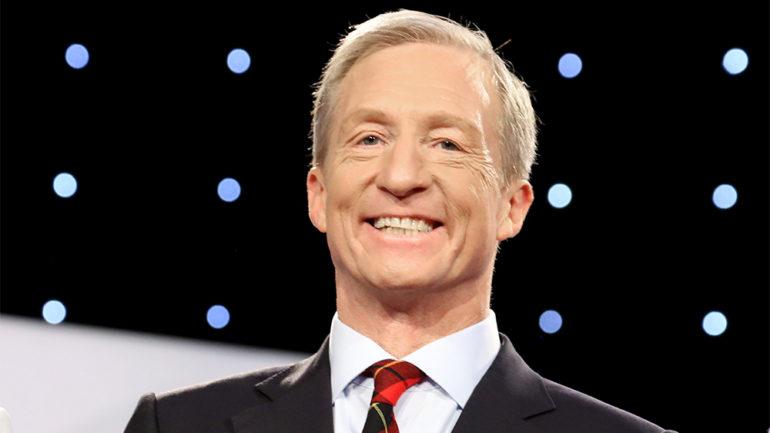