LOS ANGELES (Variety.com) – At 22, Maisie Williams is among the very youngest series regulars on “Game of Thrones,” and, indeed, within the whole of prestige TV. She’s among the show’s living tributes to the power of casting, as she, like her Stark family siblings Sophie Turner (Sansa) and Isaac Hempstead Wright (Bran), entered the show as a child with minimal experience, but swiftly proved herself a very gifted performer. Millions watched her grow into her talents — and a fitting end to her very unusual journey through her first role may be a coronation. Not on the show (although she may sit on whatever’s left of the Iron Throne yet), but in our world, that is: It’s easy to imagine, come September, Williams becoming just the second “Thrones” cast member to win an Emmy.

As Arya Stark, Williams was at the center of what will be (pending the finale, in which her role remains uncertain) the most rousing moment of the show’s last season, when she stabbed and killed the Night King. The moment’s decisiveness, ending the drawn-out Battle of Winterfell, cemented Arya as among the very few most consequential on the show, but the episode that preceded that moment cemented Williams as among the strongest performers left from an all-time-great ensemble. Arya lived out perhaps “Thrones’s” closest analogue to pure horror-movie scares, just barely holding onto the steeliness she’s spent the series learning to possess as she raced through a house rife with zombies. Elsewhere in the episode, the action was depicted on a massive scale, purposefully incomprehensible as an experience real people might be having; it fell to Williams to depict the human-scale nightmarishness of action whose grandeur the show can, at this point, do easily. She pulled off a similar feat even more impressively in penultimate episode “The Bells,” animating a fiery cataclysm with fear and with a newfound quality — mercy. It was a character shift that existed in counterpoint to Daenerys’ breaking in the opposite direction, and that felt amply supported by what had come before, telling in small, often wordless moments the story of a young woman who’d been through years of hell and was finally ready to work for peace in whatever way she could.

It’s a performance that grows in power given all that came before — Arya’s years training to be an assassin, the hatreds that course through her — and that feels satisfyingly complete. But in her run at an Emmy, Williams would be facing a foe perhaps more formidable than the Night King: deeply ingrained history. Even as the series itself is the all-time Emmy champ, the “Thrones” cast has been met with little success at the awards show: The only cast member to have won is Peter Dinklage (who has indeed picked up the trophy three times, including at last year’s ceremony). Joining Dinklage on the male side, Kit Harington and Nikolaj Coster-Waldau have both been nominated once. Emilia Clarke has been nominated in the supporting field three times, and Lena Headey a painful four times.

Headey is perhaps the cast member most obviously overdue for a win — and her best chance may have been in 2016, after the sixth season, in which she destroys the Sept of Baelor. That year, the prize went to Maggie Smith of the departing “Downton Abbey”; Headey had been competing against two of her co-stars, Clarke and, in her first and only nomination so far, Williams. It’s credible that the three performers ate into one another’s vote counts, given all they had to work with: Arya’s arc that season included her training in Braavos and her eventual decision to return home, while Daenerys is imprisoned by, and ultimately conquers, a horde of Dothraki before deciding to “break the wheel” of power.

This season, there’s not nearly as much in-show competition. Clarke is now being campaigned as the show’s lead actress, where she should be strongly considered even despite some fan frustration over the direction of her character. (Clarke, trembling with burning emotion, lends power and weight to Daenerys’ decision to rule by fear.) Headey, so overdue, was given less material to play in the final season, fully absent from — assuming that, having died, she does not appear in the finale — three of the season’s six episodes, and largely spending the scenes she does have in quiet contemplation.

And there’s even less competition from the world outside Westeros. Of last year’s nominees in the category, only Headey is even eligible this year, with the others (from “Westworld,” “The Crown,” “The Handmaid’s Tale” and “Stranger Things”) all potentially to return in 2020, once their shows are back on-cycle with the Emmys and when they may well be joined by the women of “Big Little Lies.” (Incidentally, Dinklage and Coster-Waldau are also the only nominees in their category eligible to return after last year — proving the awards consequences of the current vogue for extended hiatuses.) The veteran nominees of “Thrones,” a show that’s never had trouble getting nominations even if it can’t easily close acting wins, would seem to have the field all to themselves.

But the fact that only Dinklage — a well-known American performer before “Thrones,” playing a character who’s more involved in the show’s realpolitik than in its fantastical, magical elements — has brought home a win might suggest to skeptics that awards voters want to reward grounded, recognizable storylines, that even if the show’s Emmy luck continues, Williams may be playing a character too un-Emmy to reward. One need only look at last year’s best supporting actress to find a clear precedent for her win. Thandie Newton of “Westworld” plays an android whose extraordinary ability masks her humanity. In her winning season, she embarked upon on a journey of redemption that took her places viewers might never have expected she’d go — both because they brought her beyond her initial mission of bloody reprisal and because they resonated on a level comprehensible even to those who aren’t genre fans. Williams, precociously, is doing similar work, and has walked Arya on a similar journey. Just as she’s meted out justice for those on her list, so too could — and should — she deliver justice on behalf of a talented ensemble by bringing home a win this September. 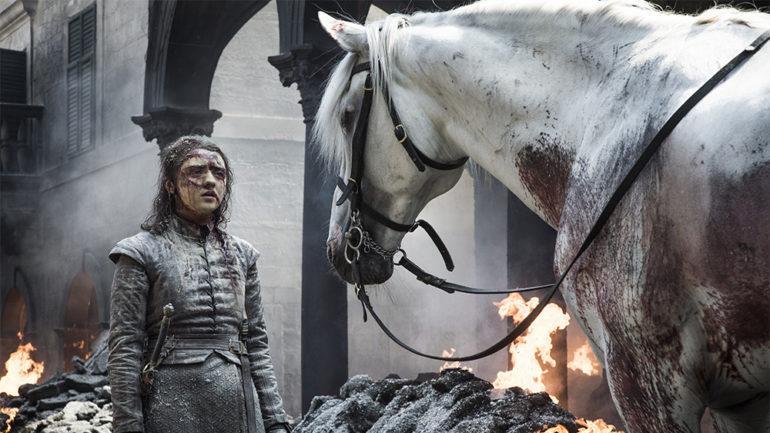