Where to Relax After Awards Season, From Mexico to Hawaii

By Kathy A. McDonald

LOS ANGELES (Variety.com) – Sundance and the Grammys. Here’s where to trip a little light fantastic and celebrate in style, forget disappointments and, best of all, reconnect with loved ones or yourself.

The Resort is expert at handling VIPs and the 948-room Grand Californian is its hotel of choice with a dedicated VIP concierge team. Newly refreshed room and lobby décor continues to honor the hotel’s ersatz Arts and Crafts Style, now lighter and brighter. Look closely to see Mickey Mouse’s trademark ears motif throughout, from the children’s pool to rug patterns. The hotel’s concierge lounge is the place to watch weekend fireworks. The Grand Californian has a direct entrance to Disney California Adventure Park and early morning entrance for hotel guests on some days. Another exit leads to Downtown Disney where new restaurants — including a Ballast Point brewery and gastro pub and upscale bowling alley Splitsville Luxury Lanes — offer fast casual dining. Expect even more crowds at the resort when Star Wars: Galaxy’s Edge opens this summer. For a tribute to Disney’s most adored and beloved couple, check out Get Your Ears on a Mickey and Minnie Celebration. At night, make sure to catch Mickey’s Mix Magic Dance Party on Disneyland’s Main Street. And if you’re a wine and culinary arts enthusiast, don’t miss the Disney California Adventure Food & Wine Festival, taking place March 1-April 23.
disneyland.disney.go.com/hotels/grand-californian-hotel/

More than $35 million was spent updating the 315-room, 1967-built Queen Kapiolani Hotel, on the Diamond Head side of Honolulu’s popular Waikiki Beach. The retro-chic look extends from mid-century style guest room furniture to the open-air lobby replete with vibrant murals by local artists. Enticements for families run the gamut from an onsite surf school offering private and group lessons and Biki bikes (Honolulu’s bikeshare program) at the ready to icy Dole Whips in the lobby. Adults will appreciate yoga classes with majestic Diamond Head in view and Mai Tai cocktails on tap at the Deck, the hotel’s lively bar and restaurant. queenkapiolani.com/

Freshly redone, the Stanford Court was known for decades as a grand dame on the heights of San Francisco’s extremely steep Nob Hill. As with all in San Francisco, the hotel’s recent renovation embraces technology: WiFi is super fast, there are 55”-HD TVs with Chromecast and other digital platforms in room, and they have a state-of-the-art fitness center with the latest cardio equipment. Another addition: Seven Stills, the hotel’s clubby lounge, has an array of its Bay View brewed craft beers and whiskies. What hasn’t changed is the hotel’s enviable location on the California/Van Ness cable car line, a user-friendly access point for exploring all of San Francisco. stanfordcourt.com

Provenance Hotels from Portland, Ore., oversaw the multi-year renovation and revival of Seattle’s venerable Hotel Theodore (built and opened as the Roosevelt Hotel in 1930) close to Pike Place Market and the city’s urban core. The design, dining and guest room minibars emphasize local firms and products: Seattle inventors and creatives’ contributions are showcased throughout the 153-room hotel. There are petite rooms for those who are out and about, while those who want to splurge should book the 19th floor residence with three outdoor terraces, dedicated media room and solarium. Upper floors have city and Puget Sound views. Hotel Theodore is conveniently located for those in town for the Seattle Intl. Film Festival or about to tour the striking outdoors of the San Juan Islands, British Columbia or Alaska.
hoteltheodore.com

Although it may seem counterintuitive to head to lower Manhattan to relax, the Four Seasons New York Downtown sets the bar for a zen-infused retreat, close to Wall Street, the Freedom Tower and nearby Brookfield Place. Access is easy to Brooklyn via the Brooklyn Bridge or East River ferry. Rooms are done in soothing tones of beige and white; shades are automated and open to city views. The spa-like bathrooms have tubs that fill in a New York minute for a soaking bath. Mattresses are pillow-topped and covered in white linen. Cocktail fixings are found in the mirrored bar, while room service offers non-alcoholic smoothies and elixirs. On hand in the hotel’s pampering spa are resident healers, including Snow Shimazu, who leads guests through yoga for restoring balance and sound therapy using Tibetan bells and bowls, lulling away jet lag and toxic byproducts of air . CUT, overseen by Wolfgang Puck, is the hotel’s upscale lounge and restaurant.
fourseasons.com/newyorkdowntown/

Napa Valley is the dream getaway spot for wine imbibers and those who appreciate pitch perfect California cuisine. After the winter rains, the hillsides will be emerald green, and bud break in the vineyards is imminent. The Archer Hotel, in downtown Napa, takes in the rich colors of the surrounding hillsides and more from its rooftop lounge, the only one in town). The city of Napa has several tasting rooms — there are more than 400 throughout the county — upscale eateries (Morimoto), and a renowned gourmet food hall (Oxbow Public Market). Drive deeper into the valley for pleasant days traversing the scenic byways, passing manicured vineyards. Return to the Archer for rooftop cocktails followed by dinner at the hotel’s Charlie Palmer Steak, dedicated to artisanal American beef cuts.

America’s original fusion cuisine originated in New Mexico and blends Native American and Spanish ingredients. Santa Fe is the epicenter of any culinary exploration of this indigenous mash-up. The Inn and Spa at Loretto is close to Santa Fe’s historic plaza, near Canyon Road’s art galleries and an easy drive to Albuquerque, home base to numerous productions and Netflix’s recent acquisition, ABQ Studios. The hotel’s iconic exterior was modeled after traditional pueblo architecture; the interiors have a warm rustic charm and Southwestern-style accents. From the inn, walk to many of Santa Fe’s acclaimed restaurants — Geronimo, for one — and innovative newcomer, Eloisa, from chef John Rivera Sedlar, formerly of L.A.’s much lauded Rivera. The hotel has upped its culinary game too at its restaurant Luminaria, via executive chef Sean Sinclair, who creatively spotlights local ingredients on the day-to-night menu.hotelloretto.com

Brass accents, mid-century styled furniture and original art at The Dewberry bring a contemporary vibe to Charleston, S.C., the Southeast’s destination of choice for food lovers and those who want to immerse themselves in colonial to antebellum era American history. Unlike most properties in the faithfully preserved Southern city, The Dewberry occupies a former, 1964-built federal government office building now completely remade with a lobby bar out of “Mad Men” and Charleston’s highest rooftop lounge, the Citrus Club. The hotel is steps from Upper King Street, known for its eateries featuring innovative takes on lowcountry cuisine, oyster bars and brew pubs. It’s also close enough to walk or bike (The Dewberry has its own fleet) to most any spot of note on the peninsula. Throughout the rebooted “Halloween’s” location shoot, Jamie Lee Curtis called The Dewberry home.
Thedewberrycharleston.com

Sofia Coppola made a business hotel sexy and unforgettable in 2003’s “Lost in Translation,” shooting at odd hours and all night to capture the dissonant effects of life in the sky, abroad and jet lagged. The Park Hyatt Tokyo’s featured role makes it a must visit for any cinephile. The hotel’s minimalist décor and relative quiet delivers a respite from the mega-city below; it’s located on the 40th-52nd floors of an office tower only a short distance from the neon-hued nightlife of Shinjuku. From there, it’s effortless to explore Tokyo, now in the midst of 2020 Summer Olympics prep. However, the Park Hyatt is a dramatic world onto itself with a pool under a glass-peak (sometimes surrounded by clouds), a sumptuous spa and the 52nd story New York Bar, backlit with jetliner views of Tokyo. Dine in at Kozue, the hotel’s restaurant, where seasonal Japanese specialties are accompanied by a rarefied sake list.
hyatt.com/en-US/hotel/japan/park-hyatt-tokyo/tyoph

The Southern tip of the Baja Peninsula is Hollywood’s playground: Jennifer Aniston, John Krasinski, Emily Blunt and Leonardo DiCaprio all have made it a favored escape. The 39-acre beachfront Los Cabos is the latest ultra-resort to open and overlooks Santa Maria Bay and its swimmable waters. A-listers love the Montage brand (other locations are in Deer Valley, Laguna Beach and Beverly Hills) for its discretion and transformative spa services. The first international Montage has everything a vacationer could desire from the 40,000-sq.-ft. Spa Montage with adults-only hot, cold and serenity pools and fitness classes. There is also snorkeling, diving and children’s programs, two more pools and a new eco-minded desert-meets-the- sea golf course designed by Fred Couples. If that’s not enough to restore the psyche: the resort retains an in-house shaman schooled in ancient traditions, who guides nightly rituals and is available for wide variety of spiritual healing ceremonies.
montagehotels.com/loscabos/

Local Beachfront Hideaway: Nobu Ryokan Malibu
Looking for a slice of garden-dappled serenity amidst the sturm und drang of the endlessly chaotic city of Los Angeles, especially during awards season? Look no further than Nobu Ryokan Malibu, a tranquil 16-room Japanese-style inn that sits steps away from the sand. Renovated from a classic 1950s motel and with rooms starting at $2,000 a night with a two-night minimum, Nobu Ryokan comes complete with authentic teak soaking tubs, indoor/outdoor fireplaces and private wood decks perched atop Carbon each.

An open-facing courtyard is dotted with lush gardens teaming with California fan palms and staghorn ferns, and a bubbling, stone-enclosed waterfall evokes nature at its calmest and most pristine.
Those lucky enough to secure a beachfront room can look forward to the quiet rush of waves lulling them to sleep. Don’t feel like leaving your room to grab food? No problem. Just ask a hotel concierge to order you sushi from Nobu Malibu, located just a few doors away. (And be sure to enjoy little touches like Marvis toothpaste and rose-scented bath salts.)

“Nobu Ryokan Malibu is the ultimate exclusive, secluded escape from Hollywood’s busy awards season, as we encourage guests to relax in the plush Ryokan style guestrooms, take in the serene ocean views and sounds of the sea, while engaging in a digital detox from the world,” says the hotel’s general manager Janelle Eng. “Nobu Ryokan Malibu also has the utmost security and only guests are permitted on the grounds, who enjoy Ryokan inspired service starting with a Japanese tea ceremony upon arrival, and personal concierge service throughout each guest’s stay.” 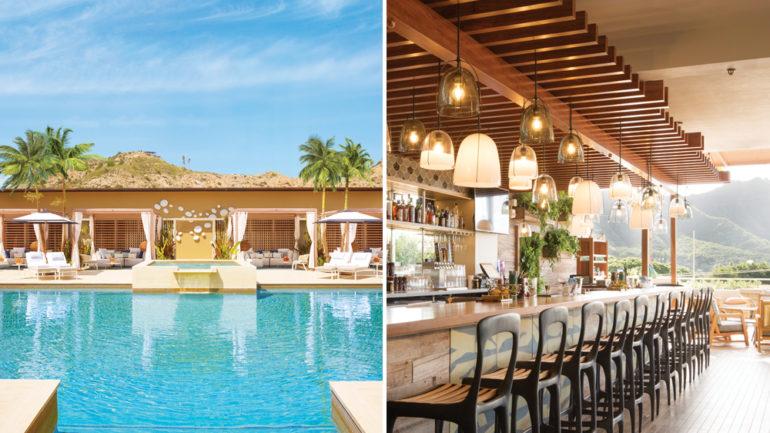