LOS ANGELES (Variety.com) – The MTV Video Movie Awards posted only a small decline in the ratings from last year.

This year’s iteration was down 6% in the 18-49 demographic and was watched by a total 4.9 million total viewers across the dozen or so networks on which it was simulcast. Last year’s show averaged 5.234 million across 11 networks, down 8% from the 2017 edition.

All told the VMAs’ viewership decline is not particularly steep, especially considering that almost all awards shows and other live broadcasts have been on the slide in recent years. A perhaps surprising bonus for is that the show was up 6% from last year in the 25-54 demographic. MTV sources say that host Sebastian Maniscalco, who is 46 years old, is likely responsible for the bump on the older demo.

According to data provided by MTV, the show was 129% increased in social engagement versus last year. Social/video views were up 85% to 269 million this year, according to MTV, and the company also noted that the show trended for 12 hours straight worldwide.

Taylor Swift was the big winner of the night taking home two trophies for Video of the Year and Video for Good, with her “You Need to Calm Down” music video. Billie Eilish was also to the fore, nabbing the coveted Best New Artist award, edging out fellow newcomer Lizzo. Other winners included Lil Nas X and Billy Ray Cyrus for Song of the Year with “Old Town Road (Remix)” and Ariana Grande who took home a Moon Man for Artist of the Year. 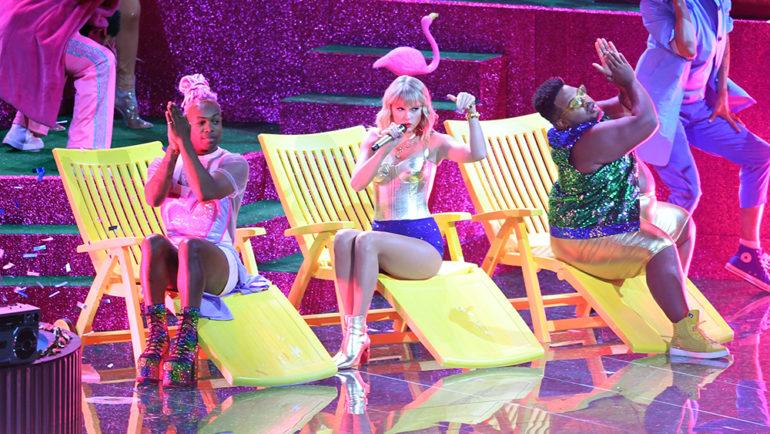