LOS ANGELES (Variety.com) – Keep in mind that we haven’t seen “Cats.” Or a single one of the half-dozen Nicolas Cage movies released “on demand” (to zero demand?) this past year. Still, in the ongoing quest to find the next masterpiece, film critics inevitably have to sit through a lot more turkeys than your typical moviegoer. Rather than let all that “cinemasochism” go to waste, we might as well amuse you with the fruits of our suffering. Below, Variety taste-makers Peter Debruge and Owen Gleiberman name — and shame — the most ill-conceived, ineptly executed, and all-around disappointing films of 2019.

In a decade or two, we’ll look back at this period as the moment that Disney went through its archive, identified its most beloved classics, and rebooted them all as bombastic CG eyesores. Whereas the re-imagineering process has yielded mostly charming results on stage and ice (e.g. Julie Taymor’s “The Lion King”), the “live-action” overhauls largely fail to match the signature look and feel that made the originals so endearing (e.g. Jon Favreau’s “The Lion King”). By letting Tim Burton have his way with its beloved airborne elephant, the studio must have known they would get a dark, sinister, and nightmarish version in its place, but the garish Gothic stylist goes overboard here, delivering a freakish carnival in which cruel characters jeer and abuse virtual animals. For this tricky tale to work, audiences must believe the poor pachyderm can fly, but this ugly CG “upgrade” never gets off the ground.

As someone who considers 2000’s “Unbreakable” to be the best movie of M. Night Shyamalan’s wildly uneven career, I was psyched by the final scene of his comeback hit “Split,” which suggested that we’d just witnessed the creation of a new super-villain, and that Bruce Willis’ “Unbreakable” character, the Overseer, would be back to deal with him. Willis is having one lousy year, and this might not even be his worst movie (that’d probably be Chinese megaflop “Air Strike,” reportedly the country’s most expensive film ever — and therefore, its biggest bomberino). He’s barely in “,” which focuses on Samuel L. Jackson’s evil genius, whose intellect is limited by Shyamalan’s own imagination. After nearly two hours of tedious build-up, the much-touted showdown between the two ends in a shallow puddle. The twist? “Glass” implies that we’re all superheroes. If that were true, my power would be sniffing out stinkers like this.

After being rejected from a Detroit talk-radio job for which minorities and women were encouraged to apply (leading him to conclude that he was discriminated against), a white man channels his inner black woman to get the gig. He calls what he’s doing “empathy,” but “impersonation” is more like it — an offensive, unfiltered, and thoroughly unconvincing racial stereotype of the “sassy” African-American women he sees fighting on a Jerry Springer-style TV show. Surrounding himself with supporting actors paid to compliment how funny and insightful he is (when in fact, he isn’t), comedian Jeremy Saville comes across downright Albert Brooks-ian, right down to his willingness to go blitzing past the boundaries of political correctness. Saville intends to use comedy to make a well-meaning point about being true to oneself, but to anyone with a bit more perspective, this out-of-touch farce — the blackvoice equivalent of “Soul Man” — comes across as so much unsolicited mansplaining.

You’ve probably heard that Matthew McConaughey goes skinny-dipping in “.” It’s true, but scoping bongo boy’s coconuts ain’t nearly enough to redeem this “steamy” tropical noir — which suffers from the opposite problem of McConaughey’s derriere-baring turn in (the also bad, but in all different ways) “The Beach Bum.” Whereas Harmony Korine’s gonzo experiment thrives on its free-wheeling lack of a script, “Serenity” is broken by high-concept ideas that just don’t pan out. On certain occasions, screenwriter Steven Knight has proven himself to be both brilliant and audacious (see “Locke”). Here, he’s merely clumsy, reverse-engineering a confusing, barely coherent thriller from a twist that wasn’t especially clever to begin with. If McConaughey’s oddly-motivated character seems too shallow, too ill-defined to come across as a real person … well, there’s a reason for that. I could explain, but then I’d have to kill you. Or make you watch “Serenity,” which just might be worse.

There’s no romantic chemistry and the main character is an immature jerk, but that hardly matters, considering I couldn’t get past the concept of this insipid fantasy. Screenwriter Richard Curtis seems to be proposing the opposite of “the butterfly effect,” where one could scrub the existence of anything from civilization — in this case, the Beatles, but why not Freud, Tarantino, or Jesus? — and nothing much would change, allowing a mediocre musician to exploit the fact he miraculously remembers the lyrics and instrumentation to the Beatles catalog well enough that he can recreate 40 or 50 of their songs by heart. It’s an insult to the very concept of pop culture and of artistic influence — the notion that great ideas change the world — and it barely engages with the fact the Beatles music was a product of its time, unlikely to inspire the same fervor coming from a self-centered, sad-sack plagiarist.

There are many words available to describe a failed reboot: boring, soulless, greedy, imaginatively bankrupt. But as dismal big-screen franchise revivals from “Hellboy” to “Child’s Play” demonstrated this year, the defining quality of a truly awful reboot is its existential emptiness, the thing that makes you go, “Why does this movie exist? And why am I watching it?” The “Men in Black” series was always an expensively tossed-together spare-parts experience (aliens! jokes! sunglasses!), and once you take Tommy Lee Jones and Will Smith out of the equation, replacing them with the “next generation” of hipster Ciphers In Suits We Couldn’t Care Less About (in this case, Chris Hemsworth and Tessa Thompson, vamping on nothing), you’re left with a knockoff of a shadow of a dupe of a concept that was barely there to begin with.

It’s supposed to be a Yuletide romantic comedy dunked in the spirit of George Michael, but taking the lyrics of the 1984 Wham! song (“, I gave you my heart…”) with a literalness that would scare a cardiothoracic surgeon, it turns into a movie cloying enough to make Michael cover his ears in his grave. Emilia Clarke plays a London singleton who’s like Bridget Jones without charm, and Henry Golding is the weirdly perfect dude who’s so embarrassingly old-fashioned he dances when he walks. The script, co-written by Emma Thompson, is nearly as cringe-worthy as her look-at-me! turn in the role of Clarke’s morosely thick-accented Yugoslavian mother.

3. The last half hour of “Once Upon a Time in Hollywood”

Yes, Quentin Tarantino’s 1969 movieland epic is on my 10 Best list , and I meant it, since I cherish the film. At least, I do until it falls off a cliff and crashes in a way I’ve never seen a movie I love quite do. The notion of completely “rewriting” the history of Charles Manson’s crimes, and what they did to our collective consciousness, is jaw-droppingly jejune, but my ultimate objection is that what had been a deliciously authentic look at Hollywood in 1969 turns, on a dime, into an insanely over-the-top pulp slasher fantasy…and somehow, this is supposed to make us feel good. I just felt betrayed.

I was surprised to be such a negative outlier on this movie, because I’ve worshipped Elton John since 1970, and I was sure that more people would have objected to the fact that the droolingly awaited biopic about him turned out to be a kind of bo-fake-ian rhapsody. As if making a sloppy chronological hash of John’s career weren’t bad enough (yes, liberties are allowed, but in this case it’s as if the Beatles were playing “Abbey Road” at Shea Stadium), the film reduces his descent into addiction to overwrought clichés and serves up musical numbers that are less “Moulin Rouge!” than MTV backlot. Are we supposed to forgive all that simply because Elton’s songs are timeless? Sorry, but when it comes to characterizing “,” debacle seemed to be the hardest word.

In the old days, it would have been a cheesy-creepy thriller about a pig-tailed she-devil doll who comes to life and scares people. But because “Annabelle Comes Home” is an offshoot of the “Conjuring” universe, and must adhere to the arcane rules and regulations of the franchise’s afterlife-meets-“Exorcist” cosmology, this notably lame horror movie, in a year when lame horror movies became more interchangeable than ever, is about a doll who doesn’t actually come to life — she’s just channeling the spirits, so that Christian ghostbusters Ed and Lorraine Warren (Patrick Wilson and Vera Farmiga) can once again face down the devil, in a demon film that turns exorcism into a tic. 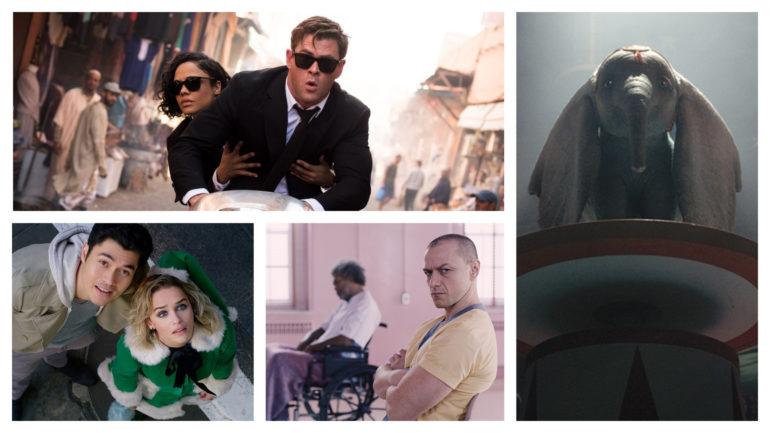