The Music of ‘Big Little Lies’: How Timing and a Child’s Taste Make the Perfect Soundtrack

LOS ANGELES (Variety.com) – A new Leon Bridges song will premiere in the final episode of Season 2 of HBO’s “Big Little Lies” and be featured on the second soundtrack for the series.

“He had great timing,” says music supervisor Simon Astall. “We got this demo for a song that’s going to be on his next album and it worked in episode seven.”

Titled “That Was Yesterday,” its placement is part of the producers’ use of songs and specific artists as a connective tissue from season to season and even episode to episode. It’s the music of Charles Bradley and Ann Pebbles, the sound of Janis Joplin, and songs such as Neil Young’s “Harvest Moon” and Fleetwood Mac’s “Dreams” that work their way into multiple episodes. Sunday night’s episode closed with a show-commissioned cover of Timmy Thomas’ “Why Can’t We Live Together” by My Morning Jacket’s Jim James; the original was used in Season 1.

Establishing a  a link and an association with the characters, says executive producer and season one director Jean-Marc Vallée, “is what we were trying to do in Season 1 — use a song more than once and associate it with a character so the audience feels that the music is coming from the story.”

“And, of course, sometimes we cheat and we keep it longer and it becomes score with a better sound,” Supertramp’s “School” on a car radio being a prime example. “But 90% of the music is mixed in a way where we want the audience to feel that it’s coming from their location and it’s not coming from the filmmakers trying to show off with music.”

Vallée cited several musical links with characters: Jimmy Ruffin’s “What Becomes of the Broken-Hearted” underscores the sudden drama in the life of Laura Dern’s Renata in the first two episodes of Season 2. Jane, the less-affluent single mother played by Shailene Woodley, has her own car radio moment with Golden Boy and Miss Kittin’s “Rippin Kittin.” And if you pay attention closely, there’s often the whisper of Roy Orbison in most scenes with Meryl Streep’s Mary Louise.

“There’s an effort to [show] these characters pick these songs,” says Vallée, who worked with Astall on this season’s selections. “If not, we link with what’s going on, for instance, [Roxy Music’s] ‘Love is the Drug.’ Perry (Alexander Skarsgard) is Jane’s drug, but it’s subtle. We’re not having the music loud and clear and we never used the part where [Bryan Ferry] sings ‘love is the drug.’ It’s not crazy in your face.”

Series creator David E. Kelly wrote plenty of songs into the scripts for the first seven-episode season, which started airing in early February 2017. Astall worked with Sue Jacobs, who won the Emmy for music supervision for the season finale that featured CSNY’s “Helpless,” a few Elvis Presley hits, covers of the Rolling Stones and Kurt Weill, and a Debussy piano piece; he’s the lead supervisor this season.

The musical premise for Season 1 was that it was largely the taste of a 6-year-old girl, Madeline’s daughter, Chloe. Two of her favorites soon became hits with the viewership, Michael Kiwanuka’s “Cold Little Heart” from his 2016 album “Love & Hate” and Bridges’ “The River,” a 2015 release.

“River” first appeared in the Feb. 19, 2017 episode and through the season’s end — the first week of April 2017 — it consistently registered more than 700,000 streams per week. Social media was buzzing about the track as well, peaking at 15,000 mentions the week of April 5.

Chloe will again play tastemaker in the final three episodes, Vallée and Astall say, as she presses play on the well-known — Carole King’s “(You Make Me Feel Like) A Natural Woman” and some Joplin interpretations — to an obscurity such as the recently unearthed music of Donny and Joe Emerson. Madeline’s teenage daughter brings Mojave 3, Sinead O’Connor interpreting Nirvana and Portishead to the family playlist.

“Whatever Madeline (Reese Witherspoon) or Ed (Adam Scott) were listening to, it was their taste being made by their special children,” Vallée says. “We have a beautiful emotional scene between Ed and Chloe where he’s sad because he’s trying to figure up what to do with his marriage. There’s a suspense in the house. The daughter feels that and there’s this track playing in the background very, very low. It’s not ‘oh, we want to touch you.’ We want it to feel like it’s playing on their Sonos system.” 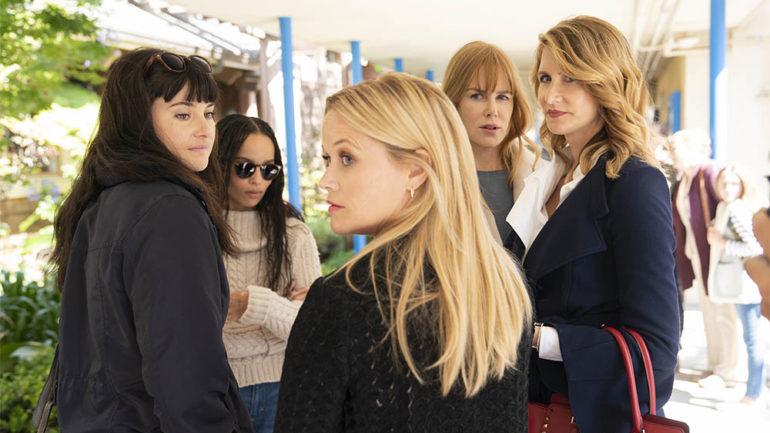