LOS ANGELES (Variety.com) – SPOILER ALERT:
Do not read if you have not yet watched “The Gang Discovers Who Killed Jeffrey Epstein,” the fourth season finale of “The Good Fight.”

“The Good Fight” began airing its fourth season on CBS All Access just a few weeks after the real world had gone on lockdown due to the coronavirus pandemic. Co-creators and co-showrunners Robert and Michelle King had spent painstaking months preparing a specifically arced out season that started with a thought experiment of a world in which Hillary Clinton had become president in 2016 , included the central law firm of Reddick, Boseman & Lockhart adjusting to life under new managers STR Laurie and concluded with that law firm trying to buy its way out from under that rule, not to mention being hired to investigate whether Jeffrey Epstein’s jail cell death was a murder or a suicide.

“Even though it’s not the way we hoped to end the season, ending on Epstein is a very good representation of what Memo 618 as a metaphor does for powerful people: They are somehow given a pass. In 2007 Epstein was raping younger women but he was given a pass and walked away with a light sentence and then didn’t even fulfill that. So I think what we’re saying is that this administration is allowing this to happen more and people should start paying attention and getting angry,” Robert King tells Variety.

The season finale, aptly-titled “The Gang Discovers Who Killed Jeffrey Epstein,” was originally just meant to be the seventh episode of the season, streaming a little more than half-way through the run. But when it became clear that the pandemic would keep production from resuming, the final touches on the edit were put on remotely, with many of the subsequent episode stories shelved for a later date.

“We were four days into the shooting schedule on Episode 8,” Robert King recalls of the shutdown. “There wasn’t enough footage to finish. But there were three scenes with Julius that are in Episode 7 that were meant for Episode 8.”

This meant cutting down some of the Epstein story to make room for Judge Julius Cain’s (Michael Boatman) battle with Memo 618. He had previously gotten a taste of what could happen to even influential men like himself if he dug too deep and upset the wrong people by meeting a former judge who was now a ride share driver, but this time things went even further. He and Diane (Christine Baranski) attempted to share what they knew with the Inspector General, but he ended up arrested and arraigned, realizing she was a part of the network protecting the policy. He asked Diane what they should do now, and she told him to fight.

Those scenes were important to get in before the end of the now-shortened season, Robert King says, because of what real-life whistleblowers have been experiencing. “We thought that was a really important thought. Even when you fight against the powers that be, they all fight back,” he notes.

This point was delivered further in the episode when the partners at Reddick, Boseman & Lockhart attempted to buy themselves out from under STR Laurie’s thumb after their new parent asked them to fire integral members of their team in order to cut costs.

“There was a shot of of dogs in the hallway from Episode 8 in the episode as well to give the sense that the bad guys are still imposing their dog rules on the firm,” Robert King says. “What we really wanted this episode to be was the start of the battle royale between upstairs and downstairs — when the gloves come off without a full-on fight.”

Mixing those ongoing arcs with a one-off investigation into the cause of Epstein’s death proved to be a delicate balancing act for the Kings. But it became even more complicated when they realized that what intrigued people most about Epstein and whether or not he committed suicide was tied up in a lot of seemingly exaggerated events and conspiracy theories.

The episode sees various members of the law firm arguing over these theories, while others chase wild leads from a hairdresser (guest star Mario Cantone) who gave Epstein a haircut on a private jet right before he was going to be arrested and was given an envelope to pass onto his girlfriend in return, to using Donald Barr’s book to decode a message, meeting a woman (guest star Donna Lynne Champlin) who worked a party at which Epstein and Donald Trump palled around and Marissa (Sarah Steele) and Jay (Nyambi Nyambi) visiting Epstein’s island temple.

“What’s disturbing is how much is real,” Michelle King says of the events in the episode. “The Donald Barr book is real; the cameras did not work [around his cell].”

“So much of our writers’ room is about people going out and doing homework, research,” adds Robert King. “A few of the writers went off and did research about not just the things that went wrong that allowed him to commit suicide, but all the way there were oddities about his life. His life was blessed in many ways by being entitled. He didn’t have many natural talents, and then he was given so much.”

The hairdresser piece of the story was invented “wholecloth” for the episode, the producing duo admits. But the idea that Bud was Epstein’s nickname for his penis, which he had cryogenically frozen (along with his brain) came from real rumors and statements from people close to him who claimed Epstein wanted to “save two organs from his body.”

“A lot of the episode was playing off how easy it is to go down that rabbit hole of pizzagate. There are enough oddities that it keeps pushing you deeper and deeper. And the other part was playing off ‘Citizen Kane’ and what defined the character,” says Robert King.

The episode ends with Marissa and Jay leaving the temple, oblivious to what lays beyond the locked compartment that seemed empty at their quick glance. But the camera travels deeper, around corners, until it comes to the organs floating in their special containers, revealing first the brain and then the penis, complete with engraved nameplate that reads “Bud.”

“We love using movies as metaphors for the narrative. It seemed like a very funny, for us, joke about ‘Citizen Kane’ that was a comment on present day. Instead of the solution being a sled that takes you back to childhood and sweetness and light and snow, you go to, ‘What is the essence of Jeffrey Epstein’s character?’ And a lot of these rich men who want to live forever and seem to have the money to think they can, this is exactly what they want to say of themselves. For us it felt like a way to have a last word that made you rethink the episode you saw before but with a dirty joke that played off of who Epstein was.”

Ending the episode, and now the season, on such an image and statement provides some resolution for the audience, but not the characters. While the Epstein story was designed to be self-contained, what happens with the cliffhangers of what will happen with Julius, Memo 618 and STR Laurie remains to be decided. Delroy Lindo, for example, was originally set to leave the show after the end of the fourth season, but because the season was truncated, there was no sendoff for his character Adrian Boseman.

The Kings are currently planning for a fifth season that “completes a lot of the thoughts of the fourth season,” says Robert King, citing how they were going to “have Diane using the very thing she hates to get out from under Julius losing in court” as an example.

But what gets answered and how it does will depend on “who’s available to us and what the world looks like” at the time production can resume, Michelle King adds. “That is kind of what we do any year when we’re starting out. It will just perhaps be a little on steroids.” 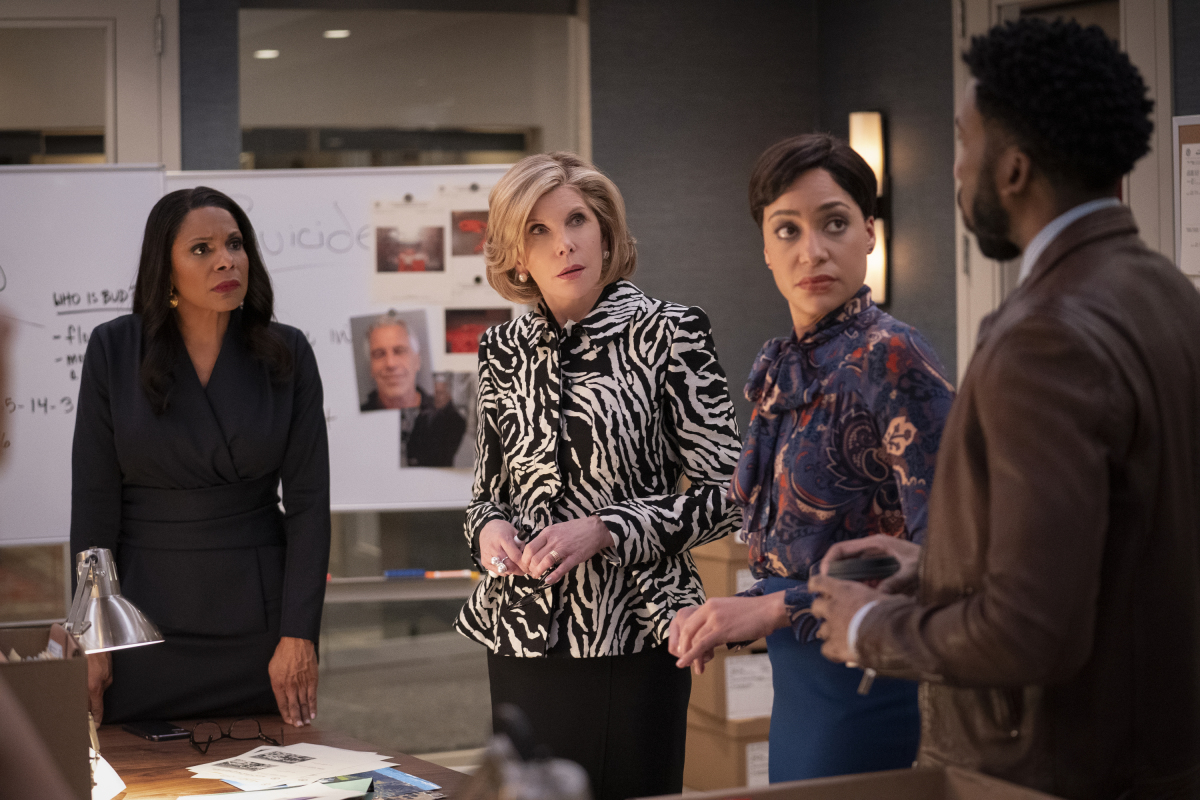