LOS ANGELES (Variety.com) – Following the release on Thursday of her pro-LGBT song “You Need to Calm Down” and a surprise performance at New York’s gay landmark Stonewall Inn on Friday, Taylor Swift has tripled down on her Pride Month activity this morning with the release of the video for “Calm Down.”

Perry tweeted shortly after the clip dropped, “This meal is BEEF-free.”

The setting for the video, directed by Drew Kirsch, is a pastel-colored trailer park, with anti-LGBT protesters being faced down or ignored by the flamboyantly dressed stars; the clip culminates with a massive food fight. And if Swift’s meaning weren’t already clear enough, it closes with the message: “Let’s show our pride by demanding that, on a national level, our laws truly treat all of our citizens equally. Please sign my petition for Senate support of the Equality Act on change.org .

In the video, Ferguson, who hosted Swift’s Stonewall appearance on Friday ,  is shown kissing a man in a mock-wedding ceremony.

The song’s lyrics make her intentions clear, Come verse 2, she’s getting socially conscious in a way that will surprise only anyone who slept through the celebrity news cycle in the  first two days of Pride Month,  “Why are you mad when you could be GLAAD?” she asks, echoing the last phrase for good measure. “Sunshine on the street at the parade / But you would rather be in the dark ages / Makin’ that sign must’ve taken all night.”

For anyone who wasn’t clear on her intentions from the mere acronyms of the previous verse, she gets more explicit with the “shade never made anybody less gay” line in the pre-chorus. A possible (probable?) Billy Porter mention comes up in a different iteration of the refrain: “Can you just not step on his gown?”

In a statement reacting to the song on Friday, Anthony Ramos, director of talent engagement at GLAAD, said: “ is one of the world’s biggest pop stars. The fact that she continues to use her platform and music to support the LGBTQ community and the Equality Act is a true sign of being an ally. ‘You Need to Calm Down’ is the perfect Pride anthem, and we’re thrilled to see Taylor standing with the LGBTQ community to promote inclusivity, equality, and acceptance this Pride month.” 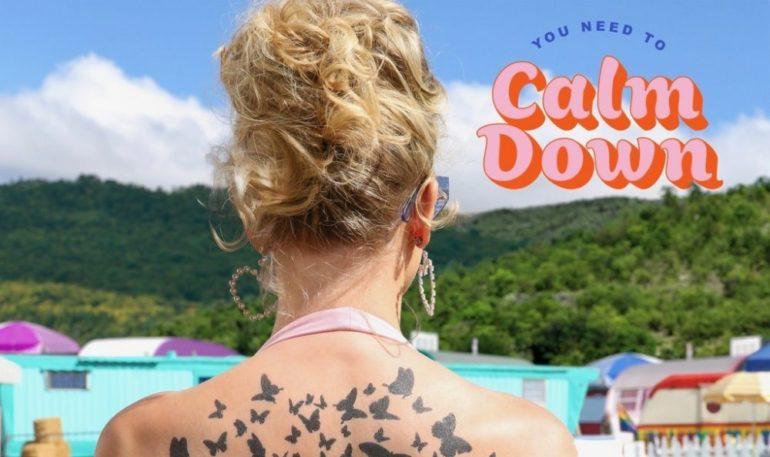