LOS ANGELES (Variety.com) – To capitulate to Chinese censorship, or not to capitulate? That’s the billion-dollar question increasingly facing U.S.entertainment companies that wish to retain their access to China’s enormous 1.4 billion-person market while maintaining a veneer of integrity in the eyes of supporters back home.

A “South Park” episode and a single tweet from an employee have sparked a larger debate on how U.S. firms should do business with the Middle Kingdom. Senior U.S. politicians and public figures such as Hillary Clinton have waded into the controversy, while China has struck back by canceling broadcasts and pulling U.S. content from its internet.

“” has essentially been wiped from the Chinese web in the wake of an episode that pointedly made fun of Chinese leader Xi Jinping and the role that Chinese censors play in shaping Hollywood content. Mention of it no longer appears anywhere on Weibo, China’s Twitter equivalent, or major streaming platforms and discussion boards. A search on Youku for the show in both Chinese and English yielded zero results and the message: “Some results are not shown due to relevant laws and regulations.”

The hard-hitting episode “Band in China,” which aired last Wednesday, has two plotlines. In the first, Randy Marsh decides to expand his marijuana business to China. After an initial stint in a brutal prison labor camp, he eventually strikes a business deal with the regime and, to prove his loyalty, decapitates Winnie the Pooh — whose image has in fact been censored in China due to joking comparisons of his likeness to Xi. Marsh ends up making a literal truckload of money.

Alongside Marsh on his flight to China are NBA players — including, prophetically, James Harden, who Monday apologized to China to stay on its good side— and familiar Disney characters like Thor, a “Star Wars” storm trooper, Buzz Lightyear and Snow White. Later, the lot are lined up and berated by a savage Mickey Mouse lookalike who accuses them of threatening his bottom line, saying: “Who here thought they had permission to say anything critical of Chinese politics?”

In the second plotline, four students form a death metal band and are approached by a money-hungry producer who tells them the path to profit is a biopic that appeals to Chinese viewers. The screenplay undergoes numerous rewrites under the direct supervision of Chinese censors, removing references to the Dalai Lama, organ transplants and homosexuality (which is not a problem, “unless you want to make money in China,” the producer warns).

“It’s so wrong. We live in a time when the only movies American kids see are ones that are approved by China,” one of the kids says, while another tuts, “It’s like China’s like the new MPAA.”

It’s become increasingly common for U.S. blockbusters to earn more in China than they do at home, and Hollywood frequently makes drastic changes to its content to kowtow to the rigid dictates of China’s censorship policies — for instance, deciding to make the villains North Korean rather than Chinese in the case of MGM’s “Red Dawn,” or blow up the Taj Mahal instead of the Great Wall in Sony’s “Pixels.”

After trying to write a band biopic screenplay that “comes from his heart” with a Chinese official breathing down his neck, “South Park” character Stan eventually gives up. He concludes: “I can’t sell my soul like this….It’s not worth living in a world where China controls my country’s art,” adding: “Anybody who would betray their ideals just to make money in China isn’t worth a lick of spit.”

On Monday, “South Park” creators Trey Parker and Matt Stone doubled down on their critique, mocking the types of apologies Western firms seeking to retain market access are constantly forced to make for “hurting the feelings of the Chinese people” with some fake remorse of their own.

“Like the NBA, we welcome the Chinese censors into our homes and into our hearts. We too love money more than freedom and democracy. Xi doesn’t look just like Winnie the Pooh at all,” they tweeted. “
We good now China?”

It was a nod to how the NBA has this week become the real-life example of Stan’s predicament following a tweet from Houston Rockets general manager Daryl Morey that expressed support for ongoing pro-democracy protests in Hong Kong. It was quickly deleted and deemed “regrettable” in an initial response from the NBA. The Chinese version of that first statement was even more strongly worded, stating that the league was “extremely disappointed in the inappropriate comment.”

Politicians on both sides of the aisle criticized the response, with Republican Sen. Ted Cruz slamming the NBA for “shamefully retreating” and Republican Sen. Rick Scott calling the statement “an absolute joke,” while Democratic presidential candidate Beto O’Rourke deemed it “an embarrassment.”

Late Tuesday evening, Hillary Clinton tweeted: “Every American has the right to voice their support for democracy and human rights for Hong Kong. Full stop.”

Morey’s tweet has put the NBA in hot water with the Chinese Basketball Assn., sponsors and fans in its most important overseas territory.
T
he Houston Rockets are one of the most popular NBA teams in China, thanks to former star Yao Ming — who is “extremely hot” over the controversy, NBA commissioner Adam Silver has said.
Key sponsors such as Chinese smartphone firm Viva,
ANTA Sports Products and Li Ning have suspended their partnerships with either the NBA or the Rockets.

Silver on Tuesday reasserted the league’s commitment to free speech, saying that the league “will not put itself in a position of regulating what players, employees and team owners say or will not say on these issues.”

But in response to his remarks, China’s top broadcaster, government-run , announced that it would refuse to broadcast two pre-season playoff games scheduled to take place in China this week because freedom of speech should not be extended to points of view counter to the ruling Communist Party’s. “No comments challenging national sovereignty and social stability fall within the scope of freedom of expression,” it said in its explanation of its decision, noting that it was reviewing its ties with the NBA.

CCTV owns the exclusive China broadcast rights to the NBA’s regular season, which starts later this month. Chinese internet firm Tencent owns the exclusive streaming rights thanks to a July deal worth about $1.5 billion that extended its partnership with the NBA for another five years. It has also said it will temporarily stop streaming Rockets games. Some 490 million fans watched NBA programs on its platforms last year.

The NBA pre-season exhibition games still seem set to continue as of Wednesday evening, though huge promotional billboards were seen being pulled down across Shanghai during the day. A Special Olympics basketball clinic was, however, canceled in retaliation over the tweet.

The NBA now faces the tough choice of either continuing to stick to its purported principles or caving in to China‘s demands. As
one of “South Park” characters says: “You know what they say — you’ve got to lower your ideals of freedom if you want to suck on the warm teat of China.” 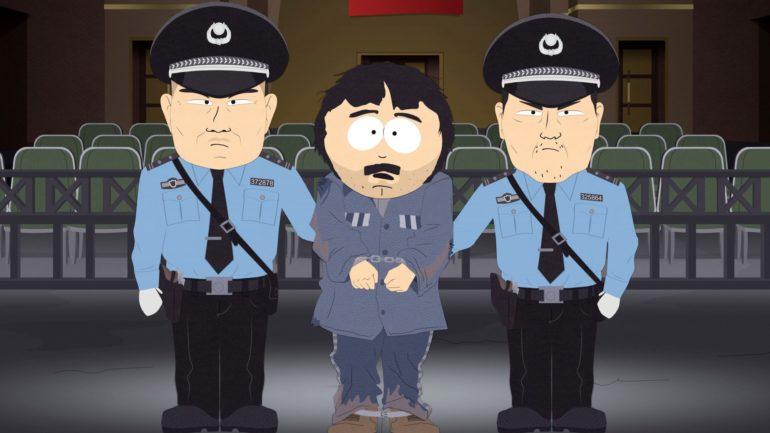