LOS ANGELES (Variety.com) – Guild elections are often rancorous and cutthroat by their very nature, some more so than others.

But the vitriol that’s erupted in the media between the candidates vying for the presidency of SAG-AFTRA has taken nastiness to new heights. The passion on both sides comes as ballots were mailed out July 29, with an Aug. 28 deadline.

’s election brawl comes at the same time that the Writers Guild of America West is in the midst of its most contentious elections in more than a decade, with opposing factions lining up slates of candidates for officers and board members.

The tensions among writers are rooted in frustration among some members over the guild’s fight with the largest talent agencies, an impasse that has now stretched on for four months and sparked costly litigation. Results of the WGA West elections will be announced Sept. 16.

The backdrop of the internal discord among both actors and writers is the changing job marketplace for Hollywood’s creative community.

SAG-AFTRA, and the Directors Guild of America are heading into what are sure to be complicated master film and TV contract negotiations early next year with the major studios, via the Alliance of Motion Picture and Television Producers. As so much of the industry’s focus turns to the world of streaming on-demand video, creatives are nervous that compensation formulas have not kept pace with the way Hollywood works now.

But as the guilds get ready for battle with the majors — which are facing their own wrenching adjustments to new business models — they’re also grappling with internal discord.

At SAG-AFTRA, Matthew Modine of Membership First has mounted an aggressive challenge to incumbent president Gabrielle Carteris of Unite for Strength.

Carteris has accused Membership First of costing SAG members $100 million in lost wages and millions more in lawsuit expenses by working to delay votes in 2009 and 2012. She, in turn, has been hit by blistering criticism by Modine allies Rosanna Arquette, Sarah Scott and four others over her alleged slow response on changing the union’s sexual harassment policies.

“I told her I wanted to put together a committee to deal with sexual harassment issues so that it might not ever happen again,” says Arquette. “Gabby was kind and very receptive. Or so I thought. The very women who came forward to painfully revisit their experiences were shut out of these ‘confidential committee’ meetings.”

Carteris’ response was to blast Membership First for politicizing the sexual harassment issue. There were also dueling threats of suits and countersuits over Carteris’ candidate statement, filed in June, in which she claims credit for a new SAG-AFTRA deal with Netflix completed in July. She was accused of using insider information to take credit to promote her candidacy via official SAG-AFTRA videos.

Oscar-nominated actress Sally Kirkland, a former SAG national board member, says the rancor has made it impossible for her to participate in union politics: “It’s sad that it’s come to this. It was too much for me.”

Meanwhile, the tussle for control of the WGA West will likely determine the course of the guild’s fight with WME, CAA, UTA, ICM Partners, Paradigm, APA and other large agencies. Phyllis Nagy, an Oscar-nommed screenwriter, and William Schmidt are challenging David Goodman for the presidency. Goodman has been the face of the union’s effort to ban agencies from receiving packaging fees on conflict-of-interest grounds. Nagy and her slate have earned the support of a number of high-profile showrunners, including Ryan Murphy, Shonda Rhimes and Greg Berlanti.

For SAG-AFTRA, the contest comes as the union faces an array of complicated issues, including healthcare, pensions, rates paid on streaming platforms and protections against workplace sexual harassment including limits on auditions in hotel rooms and private residences. The two factions are divided in many ways. Unite for Strength, which has been in control of the guild since 2009, has traditionally opted for a measured, pragmatic approach that includes keeping details of contract proposals confidential until a tentative deal is reached. The SAG-AFTRA national board approved a contract proposal with producers on July 21 for the master contract expiring next June 30 without releasing a single detail as to what it contained.

Membership First has contended that the union needs to take a more confrontational tack and disclose much more of what it’s attempting to achieve. “The current leadership uses the ‘cloak of confidentiality’ to limit your ability to know what is actually going on and limits the ability to tell you,” Membership First Noted on its website.

The recent animosity is not a rare occurrence. The two groups despise each other and have for the past two decades, dating back to 1999 when William Daniels, candidate of Membership First’s predecessor the Performers Alliance, defeated incumbent SAG president Richard Masur, who was affiliated with the predecessor of Unite for Strength. Under Daniels, there was a turbulent six-month strike against the ad industry, and resentment arose over how long the walkout lasted. The sides also battled over efforts to merge SAG and AFTRA (Unite for Strength was in favor), which finally combined in 2012 after several contentious referendums.

“The Walking Dead” star Michael Cudlitz, who is running for a national board seat, contends that Membership First is afraid of Carteris. “I believe in Gabrielle and her leadership,” he says. “She’s a strong president who has done a great job, and that scares her opponents. In order to win, they have to take a good woman down. It will not stand. SAG-AFTRA members are smarter than that.”

Patricia Richardson, a national board member allied with Membership First and best known for starring in “Home Improvement,” points to the explosive sexual harassment allegations: “There’s been inexcusable misinformation and outright dishonesty around what is being done versus what needs to be done for our sexual harassment and abuse survivors,” she says.

SAG-AFTRA secretary-treasurer Jane Austin, who is running as an independent for president, faults both factions for the current knife fight.
“It’s very simple as to why our current elections have gotten so acrimonious,” says Austin. “The very existence of these two opposing slates has created this culture in our union that divides the membership. It’s a culture that unfortunately is not about electing the best person with the best ideas to serve the entire membership. It’s a culture where people have forgotten that SAG-AFTRA is one union made up of
160,000 members, not slates.”

Austin suggests the parties each want to gain control in the boardroom and have a majority opinion that rules, rather than try to reach consensus.

“If this continues, SAG-AFTRA will get weaker, not stronger,” Austin said. “That’s why I left M.F., because I witnessed the rancor that existed there. And serving as national secretary-treasurer for the last four years, with a UFS person as president, I see how UFS is no different than M.F. They’ve lost sight of the real mission of our great union: to serve and protect its members.”

Gordon Drake, the 2000 strike coordinator who ran for president in 2003 against Unite for Strength’s Melissa Gilbert and Membership First’s Kent McCord, says he believes there’s a fundamental reason why there’s so much hostility. “People are divided in regards to ideological beliefs,” he says. “I wouldn’t call Membership First a socialist organization, but I do believe that from the Performers Alliance to this iteration of leaders, they are trying to change the course of the union. If you look at the other side, it’s more about preserving the status quo.”

The contest does not lack for star power. Modine has been able to persuade a variety of high-profile names to come on board his slate, including Ed Asner, Jennifer Beals, Neve Campbell, Elliott Gould, Rob Schneider and Jonathan Taylor Thomas, along with incumbent national board members Diane Ladd, Martin Sheen, Esai Morales and Richardson.

The internal wrangling should have at least one positive impact: It’s certain to drive turnout far above the usual participation levels of 20% to 30%.

Cynthia Littleton contributed to this report. 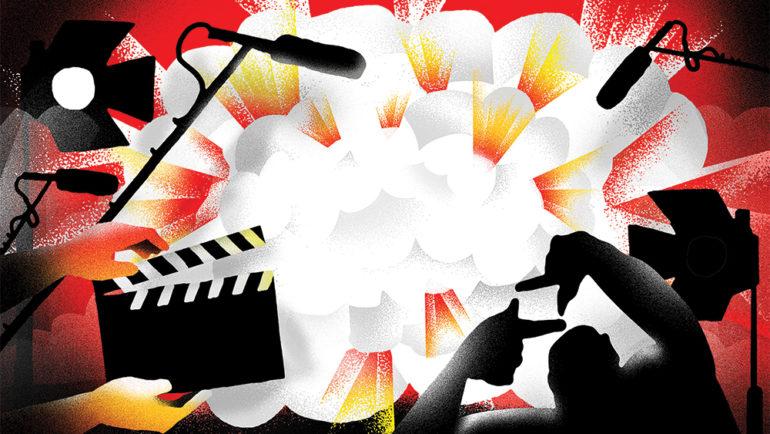