LOS ANGELES (Variety.com) – In just five years, Rihanna’s Diamond Ball has become one of the music industry’s biggest events of its kind, nearly on the level of the Clive Davis Pre-Grammy Gala. While there are several dazzling charity events with equal starpower and often-unique performances, what makes the Diamond Ball different is, obviously enough, ’s supernova aura and her unique constellation of megastar friends, eclectically curated from the worlds of music, fashion, Hollywood, sports, charity and social justice — a much younger and far more diverse group than any event of similar stature. Nearly everything about it is first-class and/or stunningly beautiful, from the floral arrangements and program design to the guest list and entertainment, which this year was a 45-ish-minute performance from Pharrell Williams, followed by an equally long, guest-jammed set from DJ Khaled. (The previous two years’ performers were Childish Gambino and Kendrick Lamar; in 2017, Rihanna, Beyonce, Jay-Z and Leonardo di Caprio were seated within 10 feet of each other.)

The evening is about charity: The centerpieces are an auction to benefit Rihanna’s Clara Lionel Foundation — which since its founding in 2011 has committed over $13 million in grants for education projects and scholarships, emergency response programs and local micro projects, with a focus on the Caribbean — and the Diamond Ball Awards, which this year honored Mia Mottley, prime minister of the singer’s native Barbados, and civil rights activist Shaun King in recognition of their humanitarian and social-justice work. (For more information head to the foundation’s website .)

But amid all that, the most jaw-dropping thing about the Diamond Ball is the way people are dressed — you do not half-step to a party thrown by one of the most iconic fashion entrepreneurs of the past 20 years. The goal is classy provocation, bold and eye-grabbing but without the outrage of, say, the MetBall: Bright colors, impeccably tailored suits, sleek gowns, catsuits, a woman in a svelte black dress emblazoned with dozens of small round mirrors, another in a dress that was practically an optical illusion, with eye-test wavy lines over a black sheer bodysuit. Rapper Saint Jhn in an incredible sky-blue suit with a big metal cross as the jacket button; a dude with more than half of his bald head tattooed (but not his face).

Others went against the grain as well: One older guy wore a biker T-shirt, black jeans, studded flip-flops, a leopard-patterned fanny pack and a plastic wallet chain that we later saw lying on the floor (the chain — not the guy). And three of the night’s biggest hip-hop stars — A$AP Rocky, A$AP Ferg and Pharrell — rocked shorts with tux jackets and bow ties.

There were many memorable scenes throughout the evening. Cardi B, who’d made headlines at the Ball two years ago when the train of her gown was so long that four men carried it, had an almost equally long train on her fluffy pink gown this night — but as she left, the only person holding it was her husband, Offset. A$AP Rocky, 2Chainz and Saint Jhn, who were seated at a table nearby, talked briefly with him as he, she and her handlers exited. (Earlier, on the red carpet, Cardi yelled to photographers, “Do me a favor and make sure my nose doesn’t look big!”; Variety will have much more from the red carpet in the coming days.) When Rihanna was presenting Prime Minster Mottley with her award, she said, “She is not only the first female prime minister of Barbados, but I’ll bet she’s going to be the first prime minister to attend a 2Chainz birthday party here later tonight.”

But amid the class and glamor, there was a strong undercurrent not only of charity but also social justice: Three of the major hip-hop stars in attendance, A$AP Rocky, Meek Mill and 21 Savage, spent weeks if not months in jail under questionable charges within the past two years — and it was impossible not to think of that while watching Mill and Rocky laughing and joking with each other during ’s set, on the one hand exemplifying the aphorism that living well is the best revenge, and on the other symbolizing the legal system’s injustice toward minorities, no matter how wealthy or famous they might be. And on a day when the Trump Administration repealed yet another Obama-era environmental regulation and 2,500 people remain missing in the hurricane-devastated Bahamas, the reality of climate change was mentioned by nearly every person who spoke at the event. ( Rihanna spoke with Variety on the red carpet about the foundation’s hurricane relief efforts and more.)

While accepting her award, Mottley gestured to Rihanna and said, “I was minister of education when this young girl was in school, and to see her not just set her sights on her career but on building an empire and giving something back in this world — that’s what makes the final difference.”

The evening proceeded at a leisurely pace — nearly eight hours elapsed between the doors opening and Khaled finishing his DJ set — with mingling breaks after every event. Items sold in the lively auction included a five-star trip for 20 to Barbados including a submarine dive and a private dinner with the prime minister; a five-star trip to watch Serena Williams play in London, Paris or Australia and a meeting with her and her team; a “sporting experience” including VIP tickets to soccer, football NBA and major league baseball games and four giant bottles of Armand de Brignac champage costing on their own five figures each; and a giant, 60-pound photo book containing exclusive photos of Rihanna from her entire life, including a sculpted four-foot tall, 2,000-pound marble pedestal to hold it.

Finally, just after midnight, the last item was auctioned off and the crowd moved to the stage at the front of the venue. Pharrell, clad in a tuxedo jacket with bow tie, shorts, white socks and black loafers, played a mixtape-style set, racing through short versions of songs from all across his career. Accompanied by a DJ and dancers, he cruised from N.E.R.D’s “Lapdance” to “That Girl,” “Move That Dope,” “Frontin’,” “Beautiful,” “Special” and others along with snippets of songs he basically played hypeman for (Kendrick Lamar’s “Alright,” Beyonce and Jay’s “Apesh–,” Migos’ “Stir Fry,” Gwen Stefani’s “Hollaback Girl”). Rihanna took up her annual post near the front of the stage, dancing and singing along with friends.

Pharrell wound down with full-length versions of arguably the three biggest songs to feature him — Robin Thicke’s “Blurred Lines,” Daft Punk’s “Gettin’ Lucky” and his own “Happy” — but paused at the conclusion, shaking his head and saying “Something’s not right,” looking at Rihanna and finally handing her the mic as the DJ broke into “Lemon,” their collaboration from 2017. She was only up there for a minute but the crowd went, as Stefani’s song goes, bananas.

After a short break, Khaled took the stage and began a long rollout of guests who (thankfully) rocked the mic more often than he did. Fat Joe (“All the Way Up,” “Lean Back”), A$AP Ferg (“Work”), reggae singer Super Cat, Yo Gotti (“Break It Up”), Fabolous (“You Be Killin’ ‘Em”), Meghan Thee Stallion (“Weak Azz Bitch,” “Hot Girl Summer”), G-Eazy (“1942,” “No Limit”) and finally 2Chainz, whose birthday it actually was, performing his “Birthday Song” and Chance the Rapper’s “No Problem,” which features him.

“Shout out to Rihanna!,” 2 Chainz yelled at the end of the set. “Shout out to charity! Shout out to giving back!” Khaled moved behind the decks, Jay-Z hits roared from the speakers, and as we hit the exit seven hours after entering, the crowd kept rocking. 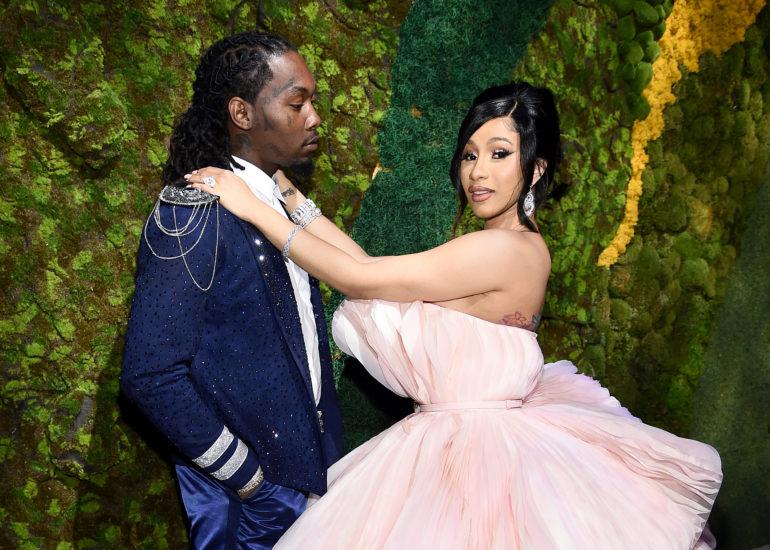 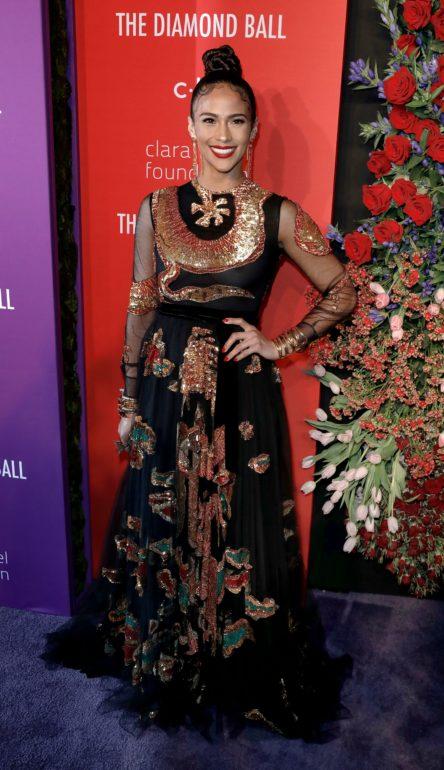 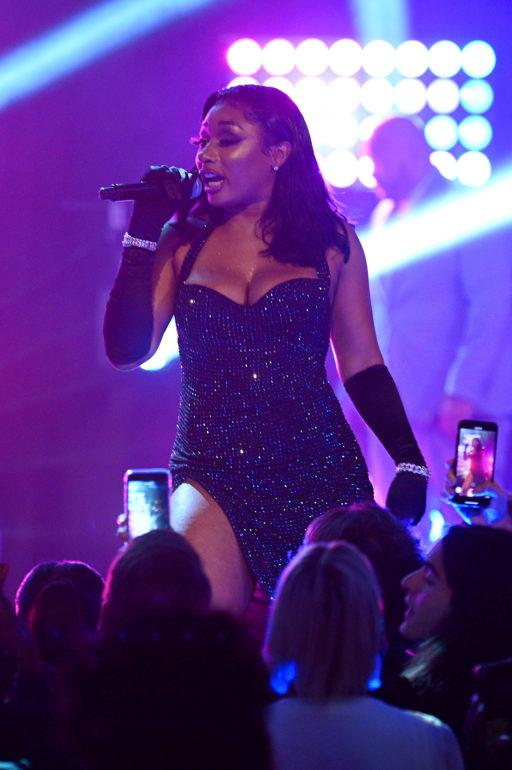 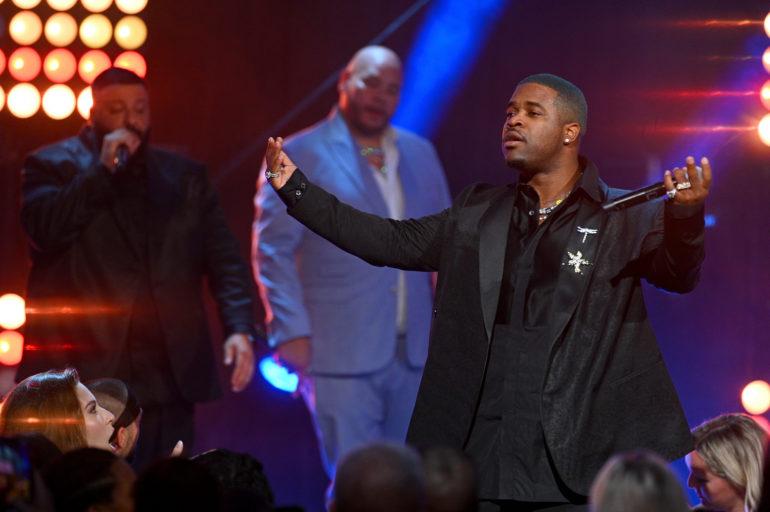 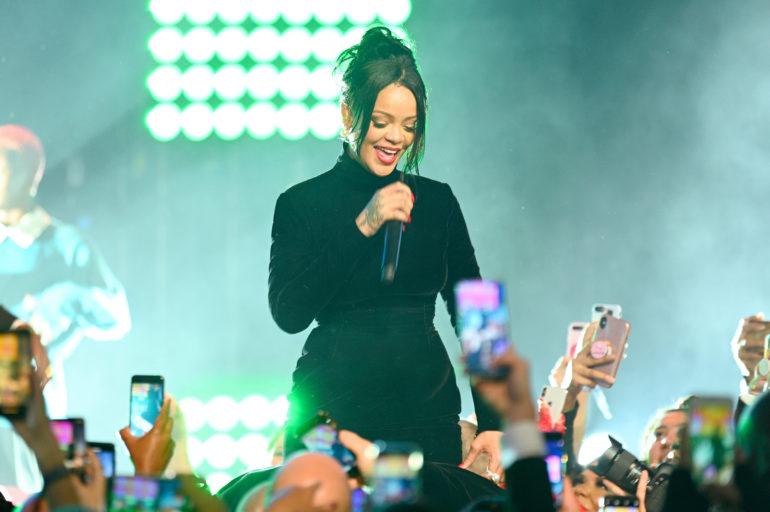 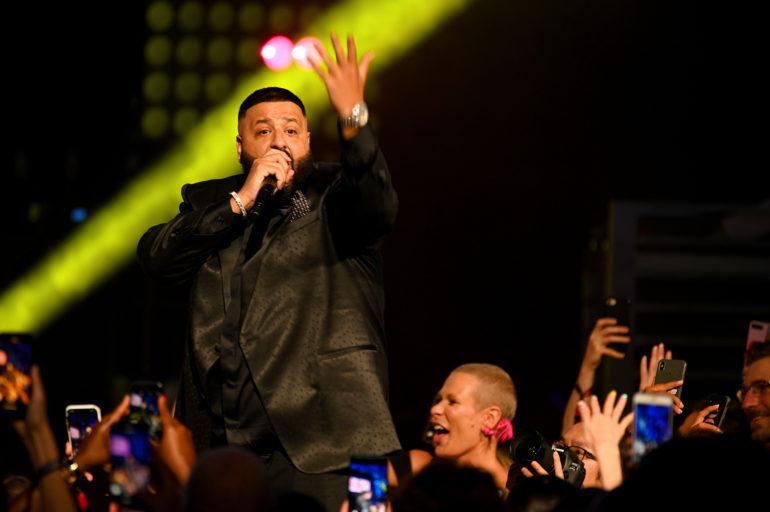 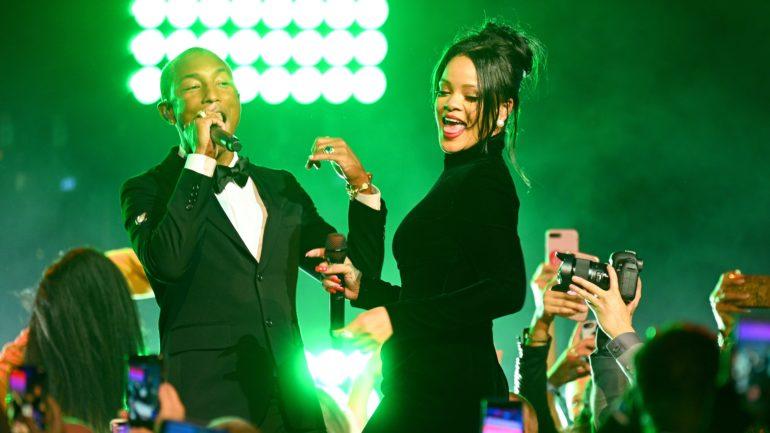