LOS ANGELES (Variety.com) – Beatles fans got something Saturday night they hadn’t in 53 years: the sight of and Ringo Starr playing together on stage at Dodger Stadium. Although McCartney himself is not a stranger to the venue, having last played there just five years ago, two Beatles taking to the outfield together was something that hadn’t happened since August 28, 1966, which turned out to be the Fab Four’s penultimate tour gig ever. 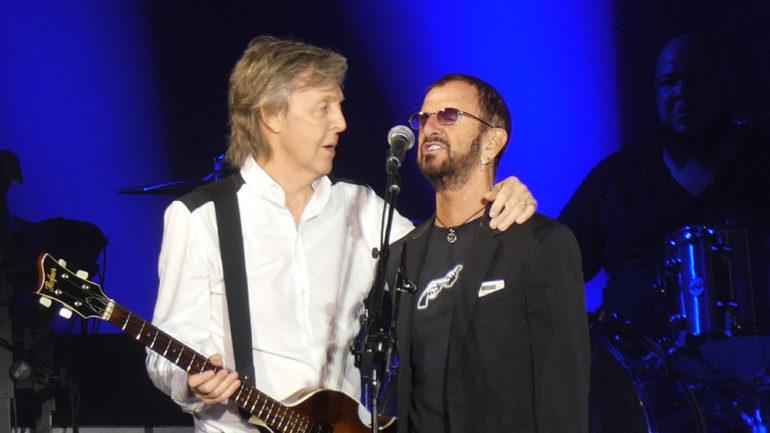 Although Starr did not close this reunion by announcing “I’ve got blisters on my fingers!,” as he did the recorded version, he still helped bring the thunder of the original to McCartney’s encore, bearing a big grin as he sat in alongside regular tour drummer Abraham Laboriel for the two numbers.

A few fans might have put two-and-two together before the encore: Ringo and his wife Barbara Bach had spent much of the nearly three-hour show in a VIP section midway back on the floor by the soundboard, and when they made an early midway through, spotters were hoping it wasn’t just to beat the Dodger Stadium exit traffic.

McCartney had just finished the first number of the encore, “Birthday” (worth noting: Starr’s was on July 7), when he announced “a surprise for us, a surprise for you, a surprise for everyone — ladies and gentlemen, the one and only . … Are you ready to rock?”

“Ready to rock,” the guest confirmed. “Peace and love, everybody. (They’re) bringing out me drums,” he pointed out, as a set was wheeled out behind him, lest the appearance having been spoiled by putting a second kit in place any earlier.

McCartney didn’t have to deviate from his regular set list to accommodate his old cohort, as both numbers have been regularly scheduled parts of his tour. During “Sgt. Pepper’s Lonely Hearts Club Band (Reprise),” after singing “We’d like to thank you once again,” McCartney turned his head Starr’s way and threw in a spoken “thank you.” Giddy-making as it was, fans were hoping this wouldn’t be the sum total of Starr’s appearance: the “Pepper” reprise lasts just a few seconds over a minute. It wasn’t: Starr grinned even more widely as McCartney’s guitarists revved up the anticipatory opening riff of “Helter Skelter,” the heaviest number in the Beatles’ catalog. 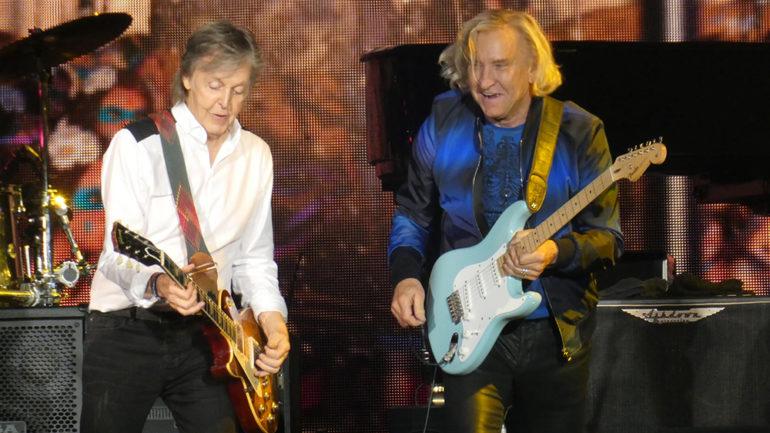 Taking center stage again for a hug afterward, Starr said, “No, thank you, Paul. It’s been a thrill for me, and I’ve had a lovely night, and it’s a great show, and I love you, man.” “And I love you, man,” McCartney said, adding Ringo’s catchphrase: “Peace and love, Ringo — forever.”

In a playful moment, Starr chucked his sticks into the audience and then grabbed at his bass as if he were going to chuck that into the crowd, too. As fans know, one of McCartney’s signature pantomimes during his shows is that he’s going to toss his beloved Hofner bass in the crowd. McCartney seemed to be caught off guard by Ringo grabbing at it and threatening to do the same, but he clearly relished the gag.

But Starr wasn’t the only guest performer as the 170-minute show moved well past the 11:00 hour. Joe Walsh, of James Gang and Eagles fame, participated in the traditional triple guitar solo on the finale, “The End,” the climax of the “Abbey Road” medley. The show was otherwise as tight as one of either Ringo’s or Laboriel’s drums, but the guitar jam with Walsh was impromptu enough for McCartney to confess to the crowd afterward: “We didn’t have a clue what we were doing.”

The last night of a North American tour that began in late May in New Orleans ended with McCartney bidding “farewell to you guys. Farewell to America. Only one thing left to be said: we’ll see you next time.”

McCartney and Starr have had a few post-Beatles collaborations over the years, most recently in February 2017 when Paul stopped by Ringo’s home recoding studio to play bass and/or sing backup vocals on two tracks for Starr’s “Give More Love” album. Their last live appearance together was in 2014, for the taping of a CBS television special commemorating the 50th anniversary of the Beatles’ landmark first appearance on Ed Sullivan’s show, for which they performed “With a Little Help from My Friends” and “Hey Jude.”