LOS ANGELES (Variety.com) – Though it barely qualifies as what most financial mortals might consider downsizing, Hollywood veterans Michael Douglas and Catherine Zeta-Jones have slightly reduced their considerable residential footprint in New York State’s fancy-pants Westchester County, selling a more than 15,000 sq. ft. Bedford Corners mansion for almost $20.5 million and concurrently snapping up a not quite 12,000 sq. ft. Gatsby-esque manor house about 20 miles away, in Irvington, for exactly $4.5 million.

Douglas and Zeta-Jones bought the more than 13-acre Bedford Corners spread about five years ago for $11.25 million and sold it in what appears to have been a clandestine, off-market deal to a mysterious corporate entity that links back to the impossibly posh Sherry Netherland building on Manhattan’s Fifth Avenue. Situated in the coveted Guard Hill area, the palatial estate is anchored by a stately, 26-room residence that dates to the late 1800s and, at the time of their purchase, offered eight bedrooms and 18 bathrooms plus an extensive spa facility with not just one but two indoor swimming pools. The property additionally included a two-unit cottage for guests or staff, a car collector’s garage and a full array of equestrian facilities.

The lavish living couple’s only somewhat smaller but far less expensive new digs, dubbed Long Meadow, meanders over 12 bucolic and largely wooded acres that roll down to the Hudson River. Just 25 miles outside Manhattan and built in the early 1930s, the 22-room stone-accented red brick Georgian mansion sits at the head of a long, gated driveway with eight bedrooms and 10 full and two half bathrooms. Listing details disclose the baronial three-story behemoth also has a total of seven fireplaces, an 11-zone heating and cooling system, a four-car garage and annual taxes that top $150,000.

An elegant columned portico leads to gracefully proportioned and intricately detailed living spaces that include a formal and living and dining rooms, both with an antique limestone fireplace and the latter sporting candy apple red lacquered walls that reflect light tossed off from a delicate crystal chandelier. There’s also double-height wood-paneled library flooded with natural light through massive arched windows, a casual lounge with wet bar and a fully updated center island kitchen with commercial-grade appliances and marble countertops. A stone-floored loggia opens to a massive stone-paved terrace that is partly shaded by a black and white striped awning and offers a stunning tree-framed view across the Hudson River, while the mansion’s eight bedrooms include a two-bedroom guest suite and a spacious owners suite that comprises a large bedroom and separate sitting room, a dressing room and a glitzy bathroom with a jetted tub next to a white marble fireplace.

The mansion’s lowest level opens the estate’s rolling grounds and contains an indoor swimming pool, fitness room, recreation/games lounge and, outside, a summer kitchen. Marketing materials indicate the estate offers “enormous untapped potential” to add an outdoor swimming pool and cabana, tennis court and guest cottage. As noted by The Hudson Independent , Houlihan Lawrence Realtors had both sides of the deal.

The Douglas-Zeta-Joneses have long and famously presided over an international portfolio of luxury homes that have made them regular fodder for property gossip columns around the globe. In addition to a sprawling co-operative apartment in a prestigious apartment house overlooking Central Park on New York City’s Central Park West and a large house in Zeta-Jones’ hometown of Swansea, Wales, the couple have long owned a walled compound in Bermuda that came up for sale earlier this year at $19 million but is no longer listed on the open market, although it’s unclear if it’s been sold. The couple’s 10-bedroom compound on the Spanish island of Majorca , which is co-owned by Douglas’s ex-wife Diandra Douglas, was also set out for sale earlier this year and is still available at a whopping $32.5 million. 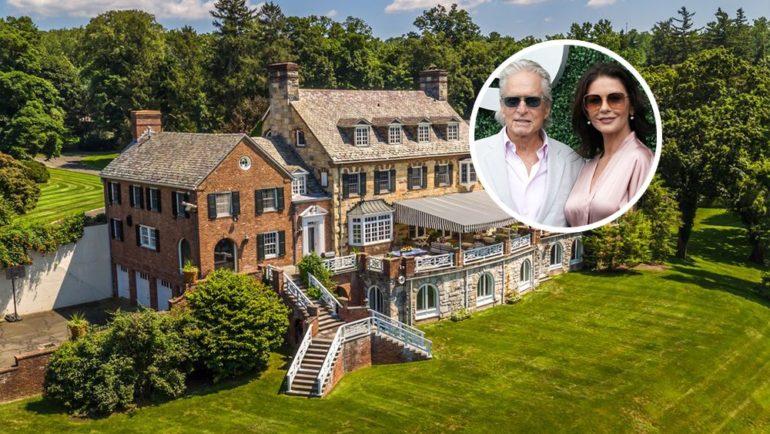