LOS ANGELES (Variety.com) – In a 90-minute onstage interview at the Marrakech Film Festival, Marion Cotillard – a best actress Oscar winner with “La Vie en Rose” – spoke about how she chooses her roles, suggesting that it is the characters who actually pick her.

“I believe that the characters choose us, when they need us to tell their story. I then try to understand why,” she said.

It is Cotillard’s most directly singer-orientated role since her performance as Edith Piaf in “La Vie en Rose.”

She first met Carax to talk about the project three years ago, but was unavailable for the role because she was then expecting her second child.

The project then went into stand-by, after being linked to Rihanna, Rooney Mara and Michelle Williams, but was revived early this year.

Cotillard said she embraced the role after she was contacted by Gillibert. “I read the script and I was impressed not only by its singularity, but above all its profound depth, which is difficult to describe. I was attracted by Carax’s poetic genius and his wild imagination. And my co-star, Adam Driver, is exceptional. I love to sing, which was another key factor, but I’m not at all an opera singer and wondered whether I would be up to this challenge. But the unknown always appeals to me.”

Cotillard talked about her motivation to act – saying that while she seeks recognition from others for her work, she’s also attracted to the possibility of disappearing into a role, in a chameleon like way, so that she becomes unrecognizable – “My dream is to make a film and no-one knows it was me.”

For her role as Piaf her physical appearance was changed – including shaving the top of her head and her eyebrows – and she says that through intense research she established a symbiotic relationship with Piaf.

“If we work hard enough we can do anything. When I play a role, the character enters me, or I enter them. ‘La Vie en Rose’ changed me. Edith Piaf changed my life. I feel a profound link to her. I delved so deeply into her life. I wanted to know everything, to understand everything that she went through. What made her frightened, what touched her. I became fascinated by her. I wanted to live as closely as possible to her. It’s something unexplainable. That’s the magic of this profession.”

Cotillard nonetheless feels that she can clearly separate her roles from her personal life, even in the context of the four films she had made with her husband, Guillaume Canet.

Having starred in more than 50 films to date, Cotillard talked about how she embraced the chance to work on international projects after the success of “La Vie en Rose” – “The chance to work in another country, and in another culture was part of my dream even as a child. It was completely magical.”

She highlighted the importance of working with Michael Mann on “Public Enemies,” James Gray on “The Immigrant” and Christopher Nolan on “Inception.”

She particularly enjoyed working with Leonardo DiCaprio on “Inception” and admitted that on the first reading of the script both of them said they didn’t fully understand what was going on. “It was a huge production. Absolutely crazy. I’d always admired DiCaprio. He’s one of the world’s great actors. And I think we share many things. We both like to research our roles. And I think we learn things a bit in the same way. I identified with him during the shoot, in terms of his sensibility. Each time I saw him act I felt that there was something that we share.”

Cotillard also discussed her in-depth research for her role in “Two Days, One Night” by the Dardenne brothers, in which she merged with the character during the shoot.

She concluded by saying that one of her toughest roles was as Lady Macbeth in Justin Kurzel’s “Macbeth” (2015), both because she wanted to achieve a perfect English accent while speaking Elizabethan English, and also found the character deeply appealing and yet disturbing. “I always knew I was going to play Lady Macbeth, I just didn’t know when.”

On Saturday evening, Cotillard went to Marrakech’s iconic Place Jemaa el Fna, and presented “Macbeth” in an open-air screening to an enthusiastic crowd, against a background of smoke-spewing food stalls, tattoo artists and snake charmers. 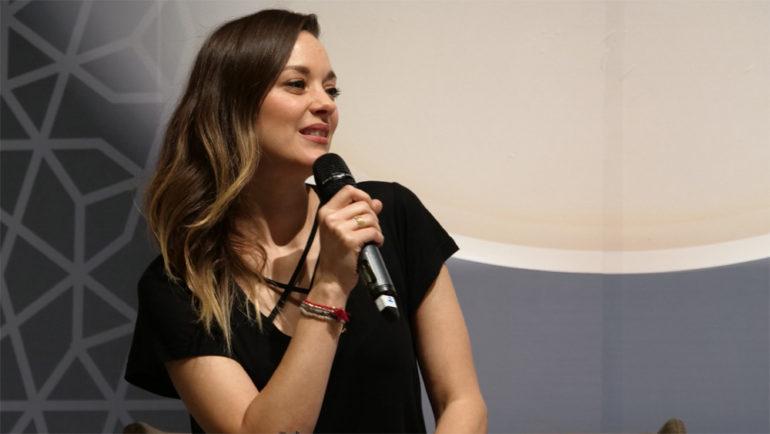