Before Elisabeth Hasselbeck was fired from “The View” in 2013, she tried to quit the daytime talk show in the middle of a commercial break.

In the new book “Ladies Who Punch: The Explosive Inside Story of ‘,’” Variety‘s Ramin Setoodeh details a day in a Hot Topics debate that got too heated for the show’s former conservative co-host.

As Setoodeh writes in the book, on August 2, 2006, Hasselbeck was having an argument with and Joy Behar on TV about a proposal from the FDA to allow the morning-after pill for over-the-counter consumption.

Hasselbeck, who argued taking the pill is “the same thing as birthing a baby and leaving it out in the street,” wouldn’t let the other co-hosts provide their opposing points of view.

Finally, Walters had to interrupt her. “Could you stop now?” Walters said. “We have to go on and we have to learn how to discuss these things in some sort of rational way.”

As the show cut to a commercial, Hasselbeck was so furious, she tore up her notecards and bolted from the table.

“Come into my office here,” Behar said, trying to calm her down.

“What the f—!” Hasselbeck yelled back. “I don’t even swear. She has me swearing. This woman is driving me nuts. I’m not going back. I can’t do the show like this. She just reprimanded me, and she knew exactly what she was doing. Good-bye! I’m off. Write about that in the New York F—ING Post!”

After that, Hasselbeck raced down a stairwell and hid in her dressing room.

With only minutes left before the live program returned, the show’s executive producer Bill Geddie had to convince her to come back.

“You have to go on because you’re a pro, so come with me,” Geddie pleaded, as they raced back to the set.

Listen to the entire drama unfold in the exclusive clip below.

This. Just. In: Yes-There were times when I was quite humanly reactive. I used a bad word when frustrated. I was pregnant with Taylor and a big conversation about the value and the lives of the unborn took place at the View. It was a battle -but not of the flesh. I used fighting words because I believe that God decides the value of the lives of babies. We care for a group of Robin’s eggs in a nest before they are hatched and likely would think twice before stomping on the awesome blue shells because we know what God placed inside the hard womb. And in the heat of the moment, when I felt the need to protect what I knew to be truth and had seen with my own eyes on ultrasound the LIFE in my own shell of a body- I used big battle words (one in particular that I am not proud of and am sorry for using in the heat of trying to defend the lives of the unborn). 2 things I have grown to learn: 1) there are words that DISTRACT from your point: Choose wisely 2) I have a God who fights the battle. I don’t have to do that all on my own. God has changed my ways. He has given me a new thing – it is my heart. He literally did that and I wrote a lot about it in #PointOfViewBook and I boast of plenty of failure and imperfection there. I still hold all my Constitutionally protected rights to freedom of faith : but now: I can hold the hand of the person who does not agree at the same time 💕💕💕💕 because I believe that we can do that by His grace. hold truth and hold grace as best we can. BY HIS POWER. In my weakness I am made strong. My new word that begins with the letter F: FAITHFUL Because that is who GOD IS

A post shared by Elisabeth Hasselbeck (@elisabethhasselbeck) on Apr 5, 2019 at 8:51am PDT

Hasselbeck responded to the release of the clip on Friday, saying she “used bad words when frustrated” with the conversation. “I was pregnant with Taylor and a big conversation about the value and the lives of the unborn took place at the View,” she wrote on Instagram. “It was a battle -but not of the flesh. I used fighting words because I believe that God decides the value of the lives of babies.”

See her full statement below. 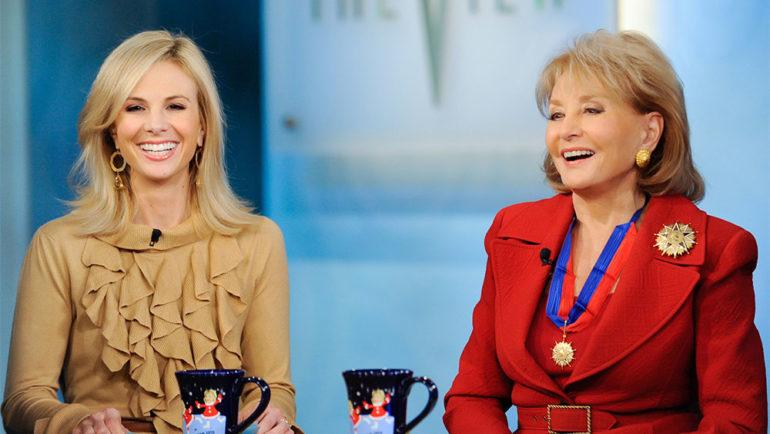