The Smart Display, which was first announced at CES back in January , is being made available in two sizes: A smaller version with an 8-inch 1280×800 pixel screen is going on sale for $200; $250 gets you a 10-inch screen with a resolution of 1920×1200. The bigger version also comes with a bamboo back, and features a slightly larger speaker, but the two devices are otherwise identical.

Out of the box, Lenovo’s Smart Display supports much of the same functionality as a Google Home speaker. You can ask it for weather, directions, query your calendar and more. The device also supports customized routines. For instance, users can greet it with “Hey Google, good morning” to get a weather forecast, hear about their day’s schedule, get an update on their morning commute and finally launch into some news programming.

Many of these requests are accompanied by visual feedback. This is especially powerful for recipes: Users can ask for instructions on how to cook dishes, and then get a kind of visual step-by-step guide.

The screen also frequently allows touch input, but during a demo given to Variety this week, a Lenovo spokesperson was quick to point out that the device is not meant to be a tablet. This means that there are no on-screen navigation buttons — going back to the home screen still requires you to say “Hey Google, go home.”

Left untouched, the Smart Display cycles through a slideshow of photography that will look familiar to anyone who has ever owned one of Google’s Chromecast streaming adapters: Like Chromecast, or Android TV for that matter, the device taps into a catalog of publicly available photos that can be customized via the Google Home app to also include your own photos. After 90 minutes, the screen fades to black, safe for a timer.

Speaking of Chromecast: The close integration with Google’s other devices is likely going to be a key differentiator for devices like the Lenovo Smart Display. The display plays nice with other Chromecast-capable devices in your house, making it possible to ask it to play videos on the TV. What’s more, the Smart Display also works as a Chromecast receiver, so you’ll be able to cast audio and video content to it from your phone. Netflix binging in the kitchen, anyone?

In addition to making content available via casting, the Smart Display also directly integrates with Spotify, HBO, Google Play Music and YouTube. The latter is another key differentiator to the : As a result of a prolonged dispute between Amazon and Google, YouTube is currently not available on the Amazon device.

Lenovo’s brief demo this week overall showed a polished experience, but it also revealed a few oddities: The Smart Display uses Google’s Duo service for video calls. But since most people video chat with their phones held horizontally, Lenovo recommends to turn the entire device 90 degrees for video chatting. Afterwards, it has to be turned back — screen rotation for other use cases isn’t supported at launch.

Also perplexing: The smart Display includes a full-blown web browser, which shows up when browsing recipes via touch input. However, users aren’t able to browse other sites of their choice on the device — a restriction that seems arbitrary, even with the “this is no tablet” disclaimer.

Finally, multi-room audio — the ability to play music synchronized on your smart Display and on other Google speakers or devices equipped with a Chromecast audio adapter — isn’t available at launch, despite Lenovo’s previous promises to support this feature. “This is not supported at the moment, but is something we’re hoping to add in the future,” said Google Assistant product manager Bibo Xu via email.

The Smart Display is Google’s first attempt to take on the Echo Show, with the help of Lenovo as the hardware manufacturer. The company also announced earlier this year that Sony, LG and JBL would release additional smart display devices in the near future. Google VP Rishi Chandra suggested in an interview with Variety in April that Google may ultimately follow up with its own smart display devices in the future as well. 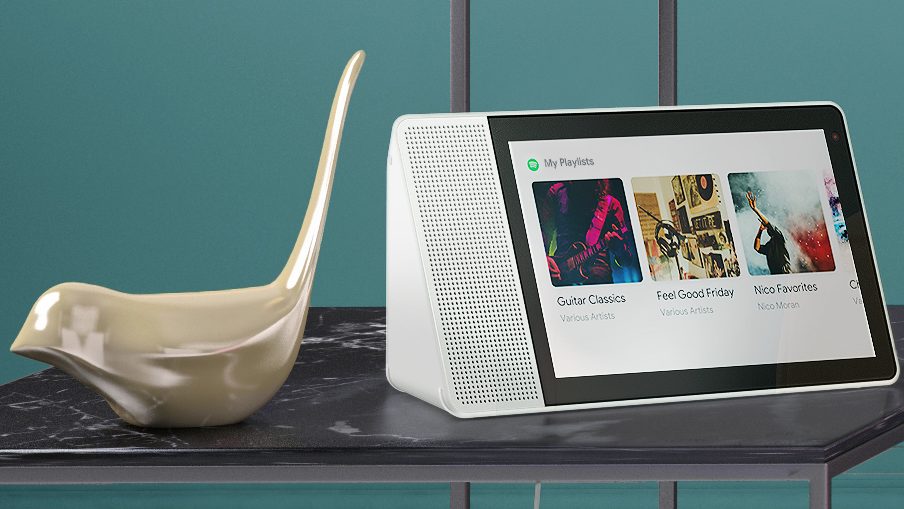