Like a Russian nesting doll, Gaga took off one layer after another. The Oscar-winning singer-actress began the carpet walk with an army of umbrella holding men, led by Maxwell, trailing her voluminous pink dress. Her dress was so large that her entourage flapped it like they were laying down a tarp. She then stripped down, cycling through four different outfits – two pink, two black – until she eventually posed in lingerie.

Gaga was also draped in $2 million worth of Tiffany diamonds, including an 18k gold necklace adorned with a little bow.

This year’s ’s theme is “Camp: Notes on Fashion,” paying homage to Susan Sontag’s essay of the same name. Gaga was on theme, as Sontag defines camp as: “A sensibility that revels in artifice, stylization, theatricalization, irony, playfulness, and exaggeration rather than content.”

Maxwell also designed Gaga’s dress for the 2019 Oscars, where she won an Oscar for the song “Shallow.” Maxwell also serves as a judge on “Project Runway.”

Cardi B, Serena Williams and Priyanka Chopra Jonas also appeared on the carpet. Broadway and “Pose” star Billy Porter made one of the campier entries when he was carried in on an Egyptian thrown on the shoulders of six shirtless men.

Porter told Variety , “Camp means as hugely over-the-top and grand and what some may feel is ridiculous and silly, and embracing all of those creative impulses inside us that very often are squelched.”

Take a look at the Met Gala Red Carpet gallery . 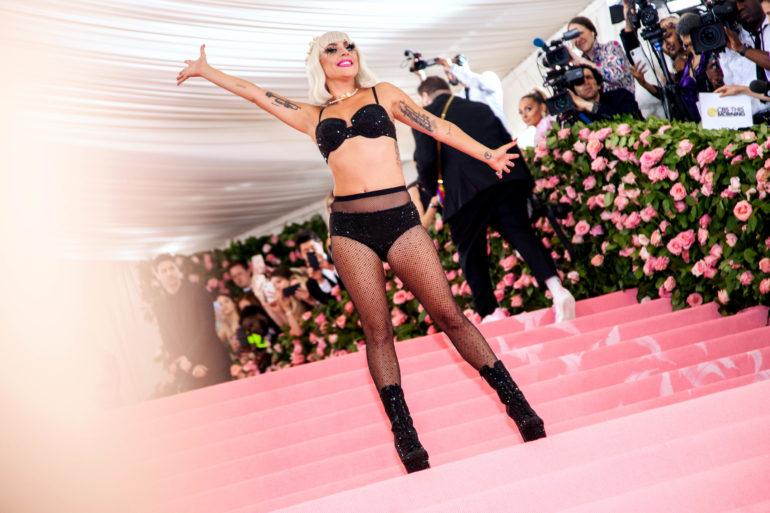