LOS ANGELES (Variety.com) – He may not be an everyday household name in America, but Takahiro “Tak” Matsumoto has long been an indisputable megastar in his native Japan, where his rock duo, B’z, is the country’s top selling band of all time, with more than 100 million records sold worldwide. The 50-something-year-old guitar virtuoso , who also has a successful solo career that, along with jazz guitarist Larry Carlton, earned him a 2011 Grammy in the Best Pop Instrumental Album for the record “Take Your Pick,” has long maintained a home in a coveted area of Beverly Hills, Calif., that hit the market this week at $8.5 million.

Much less conspicuously flamboyant than some of the surrounding properties, the residence was briefly owned in the late 1960’s by singer/actor Bobby Darin before it was sold in 1969 to legendary voice artist Mel Blanc’s voiceover artist son Noel Blanc, who owned and occupied the property for more than three decades. Property records indicate Matsumoto has owned the showbiz-pedigreed home through a corporation since 2003, when it changed hands for a smidgen more than $3 million.

Thickly planted with lush tropical foliage on a just shy of .4-acre corner parcel along prestigious, tree-lined Rodeo Drive — it’s a convenient couple of blocks from the ritzy, world-famous shopping district, the property offers nearly 7,000 square feet of renovated living space with a total of five bedrooms and six bathrooms. Built in 1922, the modestly proportioned Spanish-style main residence offers three bedrooms, including an expansive owner’s retreat, plus a discrete staff suite. There’s also an attached gym/office, a separate one-bedroom guesthouse and a fully permitted, state-of-the-art recording studio where the rock legend has hosted a slew of A-list musicians who include Carlos Santana, Ozzy Osbourne, Black Sabbath and The Red Hot Chili Peppers.

Airy, filled with natural light and unexpectedly contemporary interior spaces have been cleared of most of the house’s original architectural details and features lustrous, honey-toned hardwood floors, over-sized wood-trimmed windows and recessed lighting throughout. Formal living and dining rooms, the former with a simple, minimalist fireplace and a barrel-vaulted ceiling, are complemented by a sleekly renovated kitchen and a spacious family room that spills out to the backyard for effortless indoor-outdoor living.

The private and peaceful grounds include extensive terraces for al fresco entertaining and a mosaic tiled swimming pool surrounded by rocks and boulders, a waterfall and verdant tropical plantings.

The property is listed with Markus Canter and Cristie St. James , both of Berkshire Hathaway HomeServices California Properties . 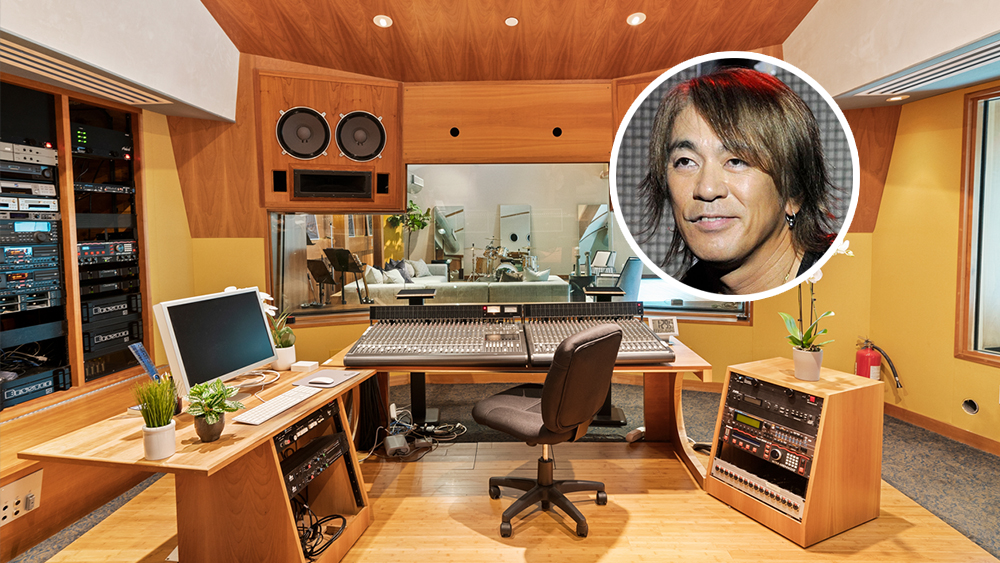