How ‘Game of Thrones’ Defined a Decade (Column)

LOS ANGELES (Variety.com) – By the standards of long-running series, “Game of Thrones” maps onto its decade unusually well. This is a very small thing. That the fantasy show, which ran with a sort of mathematically pleasing symmetry from 2011 to 2019, is more authentically of the 2010s than, say, “Mad Men” (2007-2015) or “Killing Eve” (2018-the future) is of interest only to media scholars or to those who take pleasure in number games.

But it’s also not nothing. That “Thrones” so thoroughly dominated effectively an entire one of the ten-year spans by which we measure history feels proper. As it approaches its final episode, to air May 19, the show is evincing reactions that both prove the hold it has over viewers over its decade run, and that do something more. The general consensus on the series’ endgame — that its portrayal of putative heroine Daenerys slipping into the behavior of a thuggish war criminal is a betrayal of the universe viewers thought they knew — feels like the general public metabolizing one more parting blow from a historical moment that has already eroded the sense of secure and predictable political reality.

One aspect of the “Thrones” reign that has gone a bit underexamined is the artistic context in which it emerged — an Obama-era ferment that made use of a quiet moment in political history to imagine a counter-universe of petty feuds and of endless, thrilling villainy. In 2011, “Thrones” narrowly preceded “Homeland.” The Showtime Emmy-winner was the first in a wave of shows of various genres and degrees of quality that used federal-level American politics to stage similar stories, in which canny operators manipulating the levers of power took advantage of a climate of chaos and of their opponents’ weakness to amass power. On “Homeland,” Claire Danes’ Carrie Mathison was entangled in a struggle with one such operator, in the form of Damian Lewis’ Nicholas Brody; on “Scandal” and “Veep” (which began in 2012) and on “House of Cards” (2013), corruption was so endemic that those who’d elsewhere be the villains were our protagonists.

“Thrones” fit into this wave of shows, and did not. Like them, it was a critically-regarded awards magnet and a near-instant zeitgeist hit. Also like them, it provided the thrill of political transgression during an unusually staid moment, dreaming up a government awash in the messiness so pleasantly unavailable in waking life. Unlike them, though, it did not literally — or, in any purposeful sense, allegorically — depict American politics. And it featured easily rootable moral centers, from the supporting cast (dogged, stoic Arya; wise, soulful Tyrion) to the two leads, duty-bound Jon Snow and visionary Daenerys Targaryen. From its start, “Thrones” had a sourer vision than any of its near-peers, but also seemed, to some eyes, to bear far more sweetness. Both glimmered with something other than perfect virtue at times, with Jon often a bit feckless and Daenerys driven by a politics that centered her righteousness, but both, too, were the photogenic protagonists of a series on which they were as often shown to be, comparatively, in the right, and deeply sympathetic besides. Their flaws, not so deep to make them villains, were what made them human.

“Scandal,” “House of Cards,” and “Veep” had no such characters falling so well short of outright villainy (Olivia Pope was sympathetically lovelorn, but she was also horrifically complicit in high crimes; Claire Underwood wanted to help people, but her ambition had a body count). And they also have nothing more to accomplish: All have wrapped up in the past thirteen months, to the end more or less honoring the pact they made with their audience to depict a world shot through with moral compromise. All three (“Homeland” has a season left) also ended serene in the understanding that they can be said to have somehow “predicted” the political world of today, unimaginable when the decade began. (That “Veep” lost its balance in the Trump era is a matter of degrees of villainy and not of fundamental sensibility.) As “Thrones” concludes, it inverts the formula of shows it is like-but-not: A vocal segment of its audience feels as though a compact they’d entered has been violated precisely because the show so perfectly suits its moment.

Which is not to say that “Thrones” has been trying to make statements about the particular world we inhabited in the years it aired — addressing the manner by which politics are practiced throughout history, it has matters more sweeping, or at least less specific, on its mind. But its vision of a state of affairs in which entropy rules, one in which chaos is so endemic that even would-be heroes are sucked into incompetence or derangement, came preposterously on time. Daenerys’ coming to be governed by a vengeful streak that had always been present doesn’t rhyme with any one political figure precisely, but evokes a tone of cruelty that thrives at our moment; vastly less-commented-upon but similarly striking is Jon’s shirking of seeming responsibility, a choice that has come to seem irresponsible and perhaps even weak. That this, too, could be an intentional reversal of tropes — that the heroic conqueror can be more vicious than her rivals and that the glamorously glowering prince can be saddled with insecurities as a way of examining the stories we tell ourselves about those who lead us — has been somewhat lost in the reaction to the show’s final season.

If “Thrones’” final season met its political moment with astounding clarity — falling, just as the world did from Brexit to Orban to Duterte to Trump, into an all-out melee of hatreds before the decade closed — it was actually an imperfect fit for its cultural moment. It began as a peer of “Scandal” and “House of Cards” but ended, having enraptured an audience without parallel on TV, a peer of nothing but the “Star Wars” and Marvel universes. A viewership that large will necessarily have a flattening effect. As the audience passes understandings of characters back and forth like trading cards, “Star Wars’” Rey becomes an icon of discovering one’s power, while Marvel’s Captain America stands in for rectitude and sacrifice.

Those franchises, part of a shared heritage that spans back decades and that are ultimately rooted in the joys of predictability, can bear their characters becoming memes. “Thrones,” which sought a massive audience through its staggering investment in visual grandeur and its sweeping story, probably could not have. It, for instance, put forward a central figure was both motivated by a compelling liberation theology and by less laudable impulses — and saw her read, in manners the show sometimes played into, as a meme-ready figure who was an easy analogue for Hillary Clinton, Ruth Bader Ginsburg, and Elizabeth Warren at various moments. Standing unscathed after emerging from flames or being passed around on the shoulders of her loving subjects, Daenerys was power, potency, freedom, with the swell of the music eliding just how much she needed her subjects’ fealty. Who cared? We at home loved her too. Like Rey or Captain America, Daenerys came to stand for one powerful thing, even when the story George R. R. Martin had written poked out from behind the epic David Benioff and D. B. Weiss shot to try to tell us otherwise.

And what’s more 2010s than that? One wants to resist making the story of a ten-year-span all about Trump, but the concept of an arc-bending-towards-justice narrative growing so compelling that one is convinced a dark subtext isn’t there — only to be gracelessly jerked back at a pivotal, painful moment — recurs again and again in the story of our time. Watching the streets of King’s Landing burn beneath Daenerys, invisible in the sky and finally unknowable even as an icon, viewers were pulled, so viscerally as to provoke nightmares, into the chaos their queen had emptily promised to resolve. Even those who thought the moment tracked could understand why fans were angry; so many people had felt some version of this narrative hairpin in the preceding years.

The comfort “Thrones” provides even its disillusioned fans is that it will end — and that even if that ending is unspeakably dark, that it can exist as a closed-ended story to be debated, and re-evaluated, and shifted off the coming “Best of the Decade” lists if need be. Offscreen, the pain of heroes unable to meaningfully fight back, and of the flames of madness coming to govern the world won’t end with this series, or even with the ten-year period it so perfectly encapsulated. “” was the show of its moment — and that moment threatens to continue after “Thrones,” and after the “Thrones” decade. 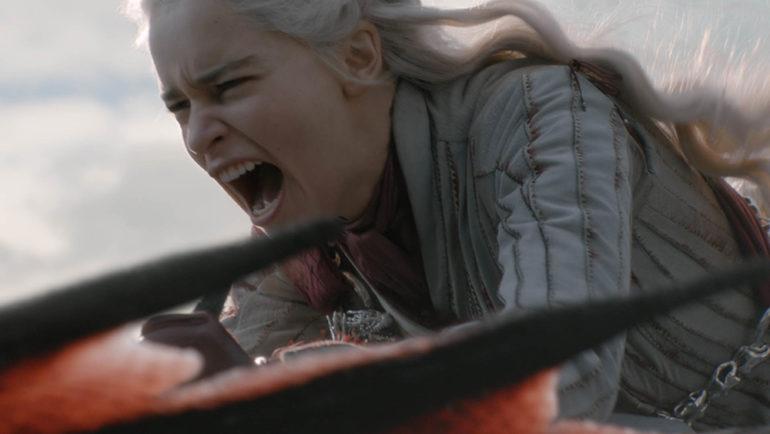