‘Game of Thrones’ Series Finale: A Lot of ‘Love’ Despite Much-Criticized Ending

LOS ANGELES (Variety.com) –
Spoiler alert: Do not read until you’ve watched “The Iron Throne,” the series finale of HBO’s “Game of Thrones,” aka season 8, episode 6.

Bran Stark may have a perpetual poker face, but “” fans certainly had a lot of feelings about him Sunday night.

The stony faced character was the No. 1 emotional driver of the episode, according to Canvs, a research startup that uses artificial intelligence to gauge natural-language commentary on social media. Bran “Three-Eyed Raven” Stark, played by Isaac Hempstead Wright, garnered 10.9% of the 578,059 emotional reactions on Twitter.

Of those who tweeted about him, 58.5% fell into the “enjoy” category, 10.1% into “dislike,” and 8.6% were “crazy”-related — no doubt reacting to his sudden ascent to the top of the King’s Landing food chain after a seasons-long battle between Cersei Lannister and Daenerys Targaryen for the throne.

Tyrion Lannister, who became Bran’s No. 2 in Westeros, was similarly No. 2 in the rankings, pulling in 10.1% of the tweeted emotional reactions. Played by Peter Dinklage, the surviving Lannister enjoyed the highest “enjoy” rankings of all the characters with the sentiment accounting for 63.2% of all responses about him.

Westeros’ most famous Night’s Watchman had more mixed reviews. Jon Snow pulled in third as an emotional driver, but 17.3% of reactions were “love”-related while 20.4% fell squarely into “dislike” territory. (He did kill Dany, after all.)

Across Season 8 as whole, however, Arya Stark and Jon Snow led as subjects of viewers’ feelings in the Twittersphere.

Overall, the “Game of Thrones” final episode was the most emotionally reacted-to primetime series between May 13 and May 20, and garnered a 78.9% spike in emotional reactions from the penultimate episode. Twitter users hit “send” on nearly 2 million, or 1,993,065, tweets since the show’s previous airing, with over 350,000 unique users reacting to the series finale.

“The show, at its best, roused emotions higher than tears , and thoughts more probing than wondering how everyone found themselves together and why they all agreed Bran should rule,” wrote Variety TV critic Daniel D’Addario after the finale.

And how did viewers feel about the much-criticized ending of eight seasons of medieval-style battles, palace intrigue and dragons?

Moments that elicited a lot of feelings included the excitement-inducing beginning, the “crazy” twist of Jon murdering the Mother of Dragons, and unsurprisingly, Jon’s reunion with Ghost — perhaps assuaging fans who were outraged that he did not pet his loyal direwolf before sending him north with Tormund after a long battle with the Night King.

The “Game of Thrones” finale drew in  19.3 million viewers  across all platforms, a series high.

Canvs counts NBCUniversal, CBS, Fox and Netflix among its customers, and says it uses “patented semantic analysis technology” people’s feelings, the reasons behind those feelings, and their business impact. 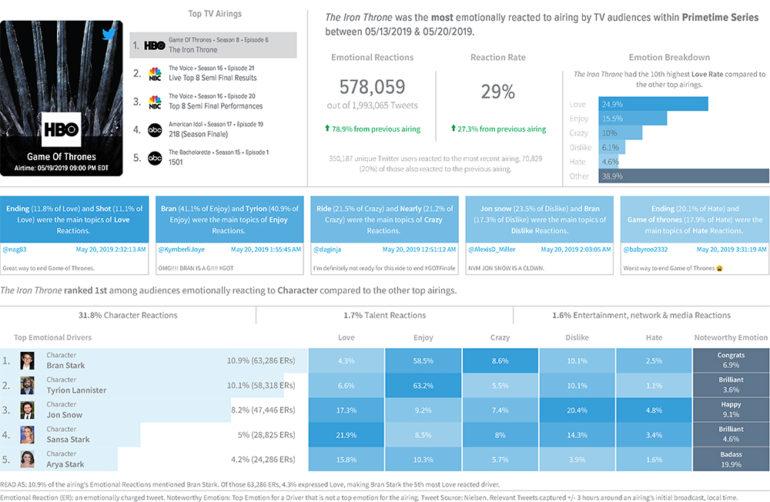 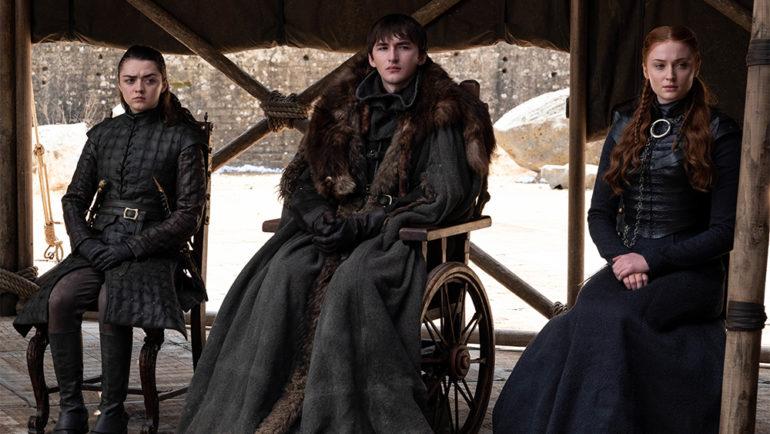