For Eurovision Contest, Even a Controversial Move to Tel Aviv Is Pop Business as Usual

LOS ANGELES (Variety.com) – Even with international headlines whirring about Hamas-fired rockets raining down on southern Israel, there was a feeling of business-as-usual in ahead of the first semifinal show of the Eurovision Song Contest Wednesday night. In the coastal Mediterranean city, considered a secular bubble of liberal politics and parties stretching well past dawn, both locals and the roughly 5,000 tourists that descended upon Expo Tel Aviv for the 64th annual event seemed far more interested in whether or not Madonna will end up performing at Saturday night’s finale (she has yet to sign an official contract) than in global politics.

Watched by about 200 million viewers worldwide, the Eurovision Song Contest, in which contestants from 41 countries compete for the winning title, barely registers in America’s pop culture zeitgeist, but across Europe and Australia it’s so wildly popular that last year’s event, held in Lisbon, Portugal, drew approximately 90,000 tourists.

The numbers are much lower for this year’s Eurovision, broadcast by local channel Kan and hosted by Israeli supermodel Bar Refaeli and TV personalities Erez Tal, Assi Azar and Lucy Ayoub. While this dip in attendees is likely a result of mounting pressure from the Boycott Divest Sanction movement and last week’s rocket fire, the participants that are here remain focused on the heart and soul of the song contest, which is to celebrate international music and diversity among recording artists and act as a creative medium through which to bridge cross-cultural divides.

“I’m so happy people chose different and people chose refreshing,” 2018 Eurovision winner Netta Barzilai (pictured above) told the crowd at this year’s first semifinal. “Thank you so much for accepting differences between us,” added the singer, known mononymously as , whose song “Toy” proved a radio smash. “Thank you for celebrating diversity.”

“No country has a perfectly clean moral slate,” said Doron Gabbay, general manager of Oleh! Records, a Tel Aviv-based non-profit organization that promotes Israeli music acts. “There needs to be some level of intellectual consistency. If you boycott every country whose government doesn’t reflect your values, no artists will be able to play anywhere. These artists should use the [Eurovision] stage to spread messages of equality and progressiveness, to support the LGBTQ movement and support people of color. That’s what Eurovision is about. It’s about uniting people.”

Yoav Tsafir, the showrunner of “Rising Star,” pointed out that for a while, “Eurovision was a dead horse in Israel — nobody cared, nobody watched it, there hadn’t been an Israeli finalist for six straight years in a row.”

It was “Rising Star” which pumped new blood into the competition and through which Israeli audiences regained passion for Eurovision.

This year’s Swedish contender, John Lundvick, broke through in 2018 on another reality show, Sweden’s “Melodifestivalen.” He took third place then, but in 2019, Lundvik’s song “Too Late for Love” earned him the top spot, and he was crowned Sweden’s official Eurovision entry.

“That song made a huge impact on Sweden and gave me the wings as an artist,” said Lundvik, who courted press at Tel Aviv’s boutique Lighthouse hotel, which is hosting the entire Swedish delegation, — including Lundvik’s back-up singers Dinah Yonas Manna, Lou Lou Lamotte, Ashley Haynes and Paris Renita, known collectively as the Mamas.

“Eurovision is a tool to bring people together,” added Lundvik, who will perform at Thursday’s semifinal show (the number of semifinalists is too large to compete on the same night). “Music is the universal language. It connects the gay community with the straight community; it connects different countries. There are so many [Eurovision] fans that are involved with the gay community and they are also so important becaue they write so many blogs about Eurovision. It shows diversity and that everyone is welcome and that is something that is very important these days in the world.”

For the Mamas, all four of which have come to Israel for the first time, exploring a country they might not otherwise have had the opportunity to visit is heightened by their connection to Eurovision.

“If I came here as a private person I hopefully would have been taken care of and has a good experience, but I think it’s elevated because of the music,” said Yonas Manna. “Because of the competition, people are so happy here and music itself brings everyone together.”

“I think with everyone being so supportive and everyone exuding and just putting out love and that message and not trying to … I know it’s a competition, but for us, we don’t really try to compete, we just do what we love,” added Haynes. “And I think that realness — people connect to that. All of us connect to that.”

(“The Notebook,” “Spotlight”) is also in Tel Aviv researching her upcoming role as an Icelandic singer in the Will Ferrell-penned comedy “Eurovision.” The movie will lens this summer at Pinewood Studios in London.

“It’s my first time to Israel and I have no idea what to expect,” said McAdams while boarding her El Al flight from LAX. “I had to jump at the chance. It just felt like the opportunity of a lifetime.” 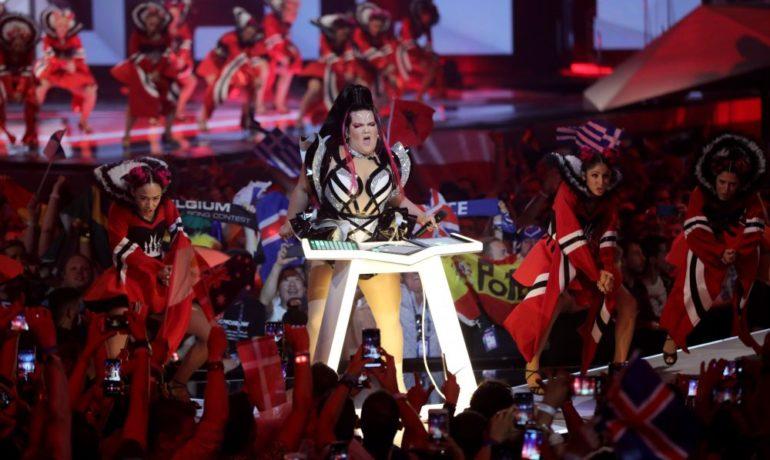