LOS ANGELES (Variety.com) – Errol Morris is no stranger to controversy.

Over the course of his Oscar-winning career, the documentary filmmaker has grilled such political lightning rods as Robert McNamara and Donald Rumsfeld, men who have been blamed for needlessly spilling American blood on unpopular wars. In Steve Bannon, a provocateur who is credited with helping Donald Trump capture the White House, he may have stirred up the hornets nest. Morris’ new film, “American Dharma,” is an earnest attempt by the “Fog of War” director to figure out what the hell happened. How did a reality TV star and real estate developer mount the most successful populist campaign since Andrew Jackson?

“We have to look at these people to understand them,” said Morris. “We have to wrestle with their ideas rather than pretend they don’t exist. As much as we may not like to admit it, Trump is president, and if we don’t understand how that happened, we’ll never know how to make sure it never happens again.”

“” premiered this week at the Venice Film Festival to largely positive reviews. It will screen at this year’s Toronto International Film Festival, where it is looking for distribution.

Bannon was eager to participate in the project when Morris first pitched him on the idea. He told the director that he was a huge fan of “Fog of War,” Morris’ look at how McNamara and the Kennedy and Johnson administrations entangled the country in Vietnam. His praise gave Morris pause. He was concerned that by the very act of subjecting Bannon to this type of on-camera interrogation, he risked legitimizing some of his more outrageous views.

“Is he using me?” Morris said. “Probably yes. Does that mean I shouldn’t be doing the movie or does it undermine the whole thing? No, I don’t think so. Ultimately the job of a reporter is to investigate and learn something you didn’t know before.”

It might be scant comfort to critics of Bannon, but “American Dharma” is no puff piece. At several points Morris tangles with Bannon, pressing him on the inconsistencies in an ideology that says it’s all about helping blue collar workers while promoting policies that give tax breaks to big corporations. In one particularly heated instance, Morris presses Bannon on how Trump’s border wall will help create middle class jobs without ever really getting the president’s former consigliere to fully explain the connection.

“The more I learned about the philosophy of , the less I believed it was coherent,” said Morris. “The question that came up over and over again is whether Bannon is a snake oil salesman or does he believe all of this is a means to an end? A lot of it is pandering, but a lot of it is true belief. I don’t know where he draws the line.”

There’s a darker side to Trumpism and Bannonism than just questionable economic arguments. The nativism that animates the movement has been on display at many key points in Trump’s rise to power. From calling Mexicans “rapists” during his campaign kickoff to refusing to roundly condemn white supremacist protestors in Charlottesville, the president has often played to racial and ethnic prejudices. Bannon, Morris says, is harder to pin down. When he was the editor-in-chief of Breitbart News, he often played on race to animate his far-right readership, but he never explicitly said anything racist in Morris’ presence. There was one remark that bothered the director, however. He was unnerved by Bannon’s characterization of French Prime Minister Emmanuel Macron as a “little Rothschild banker.”

“I’m a Jew, there’s no secret about that,” said Morris. “I don’t like to think I’m overly sensitive to anti-Semitic remarks, but there was something about the way that Bannon said it that made me sit upright. Macron was indeed a Rothschild banker [before entering politics] but the use of that expression in that context wasn’t just a dog whistle to racists. It’s a whistle whistle.”

Morris maintained final cut of the film, but he did agree to show Bannon cuts of “American Dharma” to give him a chance to respond to anything incendiary. His representatives made some noise about the section on the Charlottesville riots, but one provocative image didn’t elicit any complaints. To illustrate Bannon’s burn it down mentality, Morris films an American flag in flames.

“I had some reservations about showing that,” said Morris. “But for all of his questions [about the film], Steve did not.”

Morris voted for Hillary Clinton in 2016  and makes it clear that his heart lies with the resistance. Yet there are some areas where they share common ground. Morris’ father died when he was young and his mother raised him and his brother on a school teacher’s salary. He understands the very real economic struggles of many Americans.

“I do not agree with Steve Bannon on most things, but I do think that the middle class has been neglected and left behind,” said Morris. “I’m aware of all of these endemic problems in our society, whether it’s global warming or its the accumulation of wealth by a small sector of the population or it’s a larger and larger income divide. These are terrible things. But is the solution to all that going to be to build a wall?” 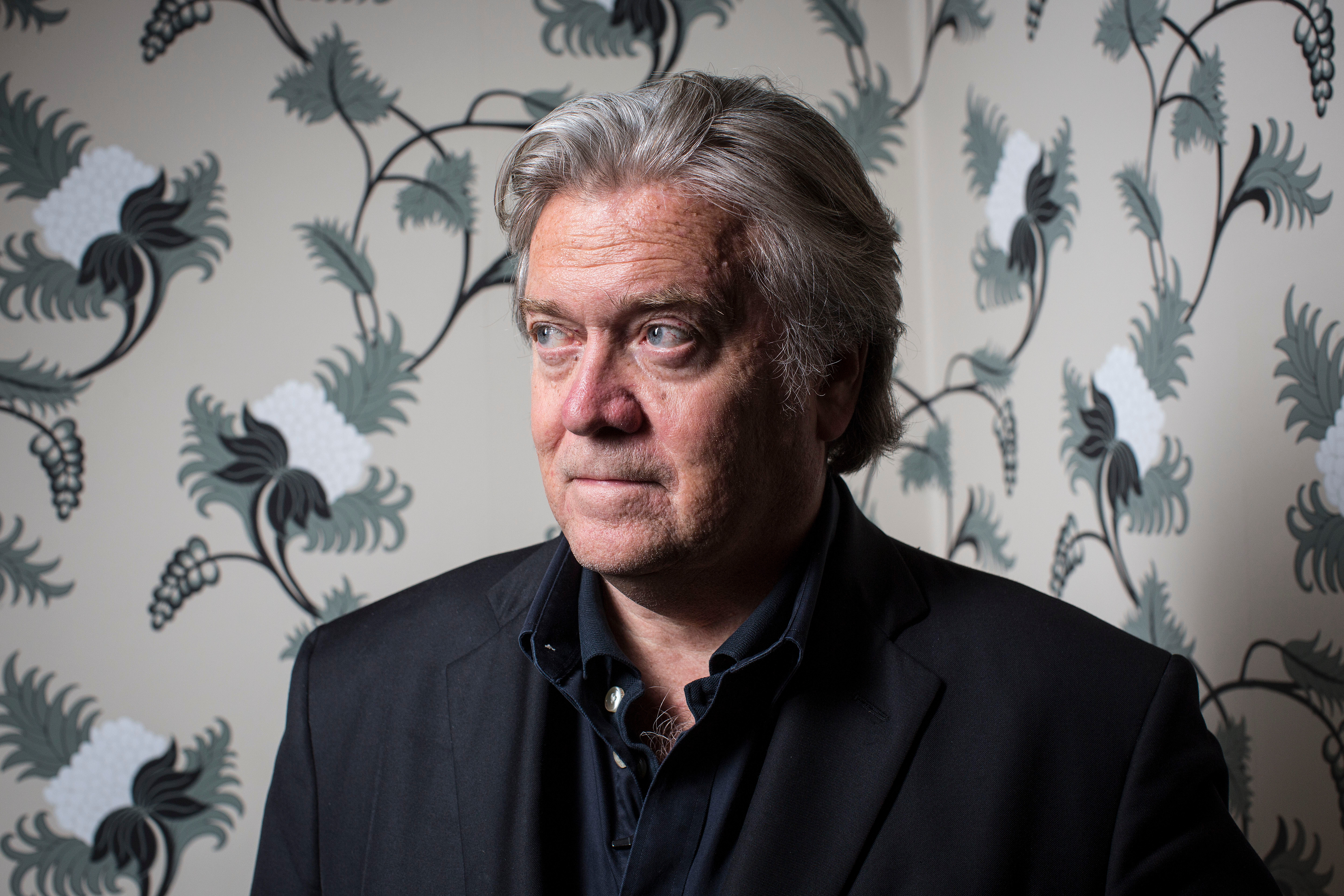