Gypsy (Joey King), a Munchausen by proxy victim, knows on some level that she doesn’t need all the medical assistance she’s been getting. But to live without it is a betrayal of her mother, and a step into the scary unknown. Her doctor (Poorna Jagannathan) offers Gypsy a soda to test her “sugar allergy” and, after agonizing thought, Gypsy refuses even to try it, saying in a strangled whisper, “My mom needs me.” It’s a choice that cements both her and her mother’s tragic fates.

No moment in this perpetually strange series has so far been quite as startling as Barry’s (Bill Hader) confrontation with little Lily (Jessie Giacomazzi), a karate star whose focus, and whose ability to match Barry blow for blow, seems something other than human. Her fighting is surreal, but her primal agility suggests a new, daring elasticity to the “Barry” universe.

The escalating tension of “” is built, at first, around the protagonist’s job. David Budd (Richard Madden) has to literally guard Home Secretary Julia Montague (Keeley Hawes). So when the auditorium where she’s speaking literally explodes, so too does the plot of the season’s signature thriller; it’s a daring narrative choice that resets a story that hardly needed the shake-up.

Five years after best friends Abbi (co-creator Abbi Jacobson) and Ilana (co-creator Ilana Glazer) burst onto the scene, they prepared to say goodbye to the show and, in a way, each other. While the series finale included many tear-jerking moments, the most purely “Broad City” of them came midway across the Brooklyn Bridge as the pair gazed out onto the New York City skyline and acknowledged the changes to come, all while dragging a ludicrously expensive toilet between them.

Craig Mazin’s hugely ambitious limited series treats the initial explosion as a horror movie might, building a creeping unease that permeates throughout the entire series in an eerie echo of the invisible radiation wreaking unimaginable havoc. One of the most terrifying turns comes when a trio of volunteers goes diving in the depths of the reactor itself to turn a crucial switch, knowing that they have mere minutes to do it — and then their flashlights start flickering off, leaving them in impenetrable darkness.

Late-night TV is crowded, but that doesn’t bother Desus and Mero, the freewheeling comedy duo that’s brought the Bronx to Showtime. In their series premiere, a frank and funny interview with fellow Bronx enthusiast Alexandria Ocasio-Cortez showed how well they can balance the granular drudgeries of politics with keeping it 100 at all costs.

Throughout “Dirty John,” Terra (Julia Garner) has been making asides about her passion for zombie stories. And at the show’s end, she gets to live one out. Her survival instinct kicks in when confronted by John (Eric Bana), a soulless predator, and her fighting back makes for a fist-pump-worthy moment.

“The Woman Who Fell to Earth”
Season 11, Episode 1

Jodie Whittaker became the first woman to step into the legendary role of The Doctor. Her performance, both deft and straightforward, crystallized in the first episode with a classic inspirational speech, including the pointed sentiment that “we can honor who we’ve been, and choose who we want to be next.”

“Escape at Dannemora” is consumed by procedural details of just how its central jailbreak happened, and it comes alive in a bravura shot tracking through the wending path to freedom. As David Sweat (Paul Dano) executes a trial run of the pathway, he’s lit at times only by his own headlamp. His race against time and through the aging colossus of pipes and ladders beneath the prison is pulse-pounding, and awe-inspiring.

Phoebe Waller-Bridge’s searing second season dug even deeper into grief, loneliness, and desire than the first, thanks in large part to the addition of an unusual priest (Andrew Scott). His and ’s startling dynamic sizzles with conflicted chemistry, especially when Fleabag — whose habit of glancing at the camera is a hallmark of the series — makes the unusual choice to shove the lens away, keeping the experience entirely to herself.

A rainy weekend at a beach house suffused with painful tension reaches its high point as Gwen Verdon (Michelle Williams) sits by the piano for a bit of musical entertainment. Her song evolves into an angry and heartbreaking reprisal at her creative partner Bob Fosse (Sam Rockwell) for having left her without a career. “Where am I going?” she sings, directly to him. “You tell me.”

“A Knight of the Seven Kingdoms”

The quiet, talky preparations for a likely apocalypse made for some of “Game of Thrones’” most moving bits of character work ever, none more so than the reward presented Brienne of Tarth (Gwendoline Christie). The loyal soldier and last defender of Jaime (Nikolaj Coster-Waldau) sees her complicated relationship with the Kingslayer bear fruit, as he formally knights her; more moving still is the approval of every man who bears witness.

“The One About the Recent Troubles”

Robert and Michelle King’s spinoff of “The Good Wife” has earned a reputation for holding a wild funhouse mirror up to today’s political landscape, but some of its best moments are its quietest. In the third season premiere, Audra McDonald proves once again that she’s a worthy addition to the cast as her character grapples to reconcile a disturbing revelation about her late father, who previously had a sterling reputation.

For almost the entire run of “Homecoming,” Julia Roberts exists in two timelines — as a person conscious of her decisions in the show’s past and as a person who’s buried the memories of her culpability in grave wrongs in the present. When they suddenly merge, it’s a thrillingly alive moment, anchored by a shift in aspect ratio that signals the expansion of Roberts’ understanding and by the star’s own face, frozen in terror.

I Think You Should Leave (Netflix)

A focus group for car advertising descends into anarchy in this sketch from Tim Robinson’s smartly crafted Netflix series. From a relatively simple and careworn premise — a comic agent of chaos shakes up a staid corporate environment — the show wrings bizarre and escalating humor, culminating in not one but two perfectly-executed bottle flips.

Jane the Virgin (The CW)

TV’s most earnest telenovela kicked off its final season with an episode, directed by series star Gina Rodriguez, in which her titular Jane struggles to accept the new state of her life in a long, dizzying, and expertly crafted monologue.

Only while inhabiting a fantasy can Annie (Emma Stone) deal with her trauma. In a drug-induced dream, she delivers a painful, edge-of-tears monologue about the sister she lost. It’s a bit of reality that gets its edge from all the madness through which it glimmers.

The Other Two (Comedy Central)

“Chase Gets a Nosebleed”

One of the year’s best and funniest new shows reached absurd new heights as frustrated actor Cary (Drew Tarver) elbowed his way into a group of self-involved “Instagays” in the hopes that they could boost his career. Instead, his efforts backfire spectacularly with a picture that’s unforgettable for all the wrong reasons.

After a season of hard-earned growth, there’s no need for the two middle-school friends at the center to do much talking. Having reunited after a painful rift, Maya (Maya Erskine) and Anna (Anna Konkle) share a secret cigarette — a final little rebellion that brings them back to friendship. It’s a bit of pleasant, easy companionability coming as a catharsis after the show’s beautifully drawn growing pains.

“Love Is the Message”

A moment of reflection amid the emotionally exuberant world the series conjures, this musical-performance set piece of “Home” from “The Wiz” starts out quiet and then builds. MJ Rodriguez and Billy Porter’s characters sing about their desire to feel safety and comfort in a hostile world, a message that they’d hardly ever allow themselves to admit outside of a song. It’s a triumph of acting and of series structure, allowing for a deepening of tension and heightening of emotional stakes.

Ramy Youssef’s quiet stunner of a comedy includes an entire flashback episode to 9/11. His middle-school classroom learns about the terrorist attacks in the same moment his family calls his walkie-talkie to make sure he’s all right, and his immediate realization that Arabic suddenly scares his classmates is both wrenching and revealing for what’s to come.

“We Must All Care”

Caught in the wrong place at the wrong time, Harrison Brennan (Corey Reynolds) is shot by a police officer while trying to help a cashier during a robbery. There’s a sense of profound injustice here, fueled by the reality of Harrison. By vividly depicting his final moments at work and texting with his husband, the show makes movingly clear he was in the middle of a normal day, permanently interrupted.

The surreal and horrifying penultimate chapter of “” had a desperate Nadia (co-creator Natasha Lyonne) and Alan (Charlie Barnett) face their deepest, darkest fears. For Alan, that means acknowledging that he needs and deserves help; for Nadia, it means excising a twisted insecurity about her childhood in the form of a jagged shard of glass from her own stomach. While wildly different scenes, both are huge payoffs that represent this surprising series at its best.

Professional food enthusiast Samin Nosrat became one of the year’s most unlikely stars with her thoughtful docuseries about how different cultures use the same basic principles to create delicious meals. No moment shows her reverence for carefully cultivated ingredients than “Salt,” in which Nosrat travels to Japan and meets the people quietly brewing the purest of soy sauce as few people will ever taste.

HBO’s languid, eerie adaptation of Gillian Flynn’s book was anchored by bruising performances from Amy Adams as an alcoholic reporter and Patricia Clarkson as her fretting mother. Their loaded interaction on a humid Missouri porch, in which Adora (Clarkson) looks at her disappointing daughter and declares, “I never loved you,” makes for a crushing scene that neither they nor the audience can soon forget.

There has simply never been a moment on TV quite like that of reluctant wallflower Annie (Aidy Bryant) going to a pool party celebrating women her size, gaping at the sheer joy of it all, and shedding her inhibitions.

Kit Steinkellner’s stark examination of how grief destabilizes everyone it touches hit a sharp, crucial snag in this episode, as furious widow Leigh (Elizabeth Olsen) recoils from a perky woman in her support grief who, she thinks, just doesn’t get it. The final moment when Leigh realizes she’s wrong is as gorgeous as it is devastating.

The landmark docuseries culminated with a jaw-dropping sequence in which Michelle Kramer finally tracked down her daughter Dominique Gardner, whom she believed R. Kelly was keeping against her will. After several episodes tracing the long history of the allegations against Kelly, this provided a jarring reminder of how current and urgent “” truly is.

Tidying Up With Marie Kondo (Netflix)

The arrival of Kondo to the home of overburdened young parents feels both deeply human and a bit like magic; that a young woman begs to be held by her seems only right. Kondo’s preternatural warmth from her earliest moments onscreen, more so even than the uniqueness of her methods, made her an instant star in the home-TV genre.

This season of “True Detective” featured several potent themes running beneath its surface — among them, the persecution of outsiders. The angry conflagration in which white townspeople outnumber poor but dignified trashpicker Woodard (Michael Greyeyes), a Native American, throbs painfully in memory even as it’s not part of the season’s main story; it’s a rageful signal of just how much anger haunts the American psyche. 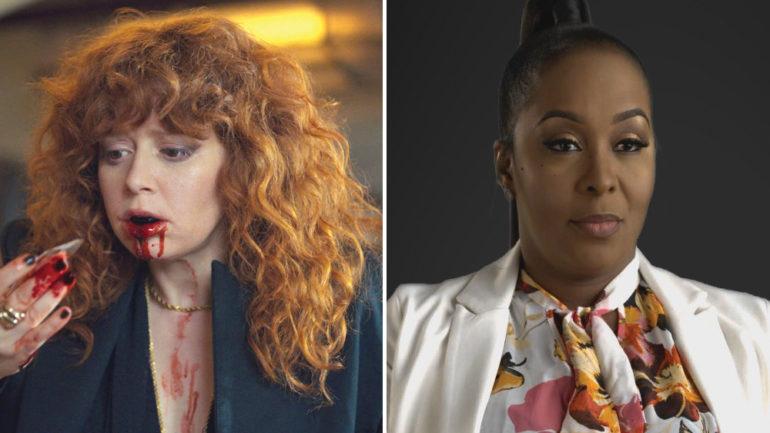