Donald Trump Jr. on if He’ll Run for Office: ‘I Don’t Ever Rule Anything Out’

LOS ANGELES (Variety.com) – Donald Trump Jr. covered a series of wide-ranging topics Tuesday when he stopped by “CBS This Morning” as part of his media blitz to promote his book, “Triggered: How the Left Thrives on Hate and Wants to Silence Us.”

In an interview full of constant interruptions, the president’s son was asked about the impeachment inquiry (he says the process is going to vindicate his father), his relationship with his father, Hunter Biden and the political divide in the nation.

“CBS” co-anchor Tony Dokoupil suggested that the title of his book, “Triggered,” is an example of how his family isn’t doing any favors to improve the temperature of the country. At one point, Dokoupil challenged Trump Jr. to “say something nice” on Twitter today.

“Do you agree that the temperature is too high in this country? That we’re too divided?” Dokoupil asked. “And if so, what are you doing to heal that divide? Because it seems like you’re doing the opposite.”

Trump Jr. retorted, “Listen, I’d love to see it get back to a place of normalcy. I don’t know if that exists today. When I look at what’s going on, when I look at the media bias, when I look at those things, it makes it very hard for my father to do his job.”

After Trump Jr. pivoted to discuss media bias, the three CBS anchors worked to get the interview back on track. Later in the conversation, anchor Anthony Mason asked about his own political desires.

“I’m interested in winning 2020 for my father right now. We’ll worry about everything else later,” Trump Jr. said of his own political ambitions.

Trump Jr. quipped, “But I won’t be a vegan, I promise you. Listen, I enjoy being out there…I don’t ever rule anything out. The reality is this: right now, I like the campaigning part. I actually enjoy some of that fight. I like getting out there and being with real people and seeing the difference that my father and his policies are making in their lives. I don’t know, right now, at this stage in my life, that I would like the day job component of it.” 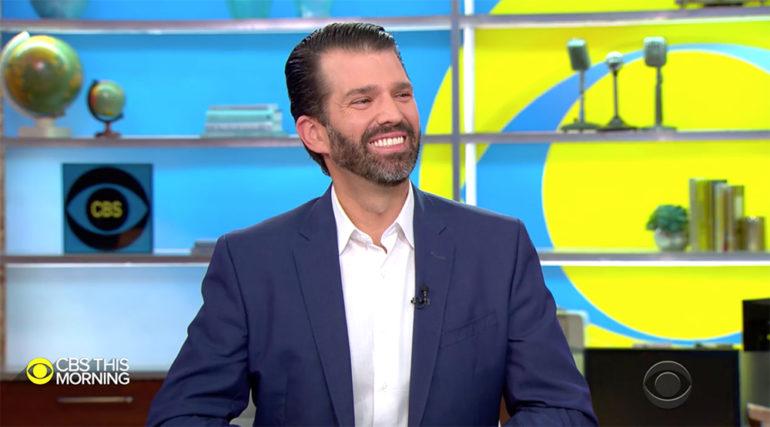