LOS ANGELES (Variety.com) – After being honored as the 2019 MusiCares Person of the Year on Friday, Dolly Parton took the stage at the Grammys to perform some of her country hits.

Katy Perry and kicked off the tribute in matching red ensembles with “Here You Come Again” and were soon joined by the Queen of Nashville in a white dress with flowing sleeves.

Miley Cyrus took to the stage in an off-white suit with her godmother to perform “Jolene,” Parton’s 1973 hit that the two have dueted on in the past. Mark Ronson, BTS, and more could be seen singing along in the audience. Maren Morris joined the duo for a stripped down version of Neil Young’s “After the Gold Rush,” which Parton covered with Emmylou Harris and and Linda Ronstadt on their 1999 album “Trio II.”  The song’s a cappella moments prompted swaying arms from the audience.

Parton also performed a song from the soundtrack of Netflix’s movie “Dumplin,’” “Red Shoes.” She was joined by Grammy favorites Little Big Town. And yes, Parton was wearing red heels.

“Anybody out there working a nine to five job?” Parton asked to transition into her 1980 single “9 to 5,” written for the comedy film of the same name starring Parton, Jane Fonda, Lily Tomlin and Dabney Coleman.

Parton is one of the most successful country artists of all time. Most known for “Jolene,” “Coat of Many Colors,” and “9 to 5,” she has won nine , three American Music Awards, 10 Country Music Association Awards, and seven Academy of Country Music Awards. She has had 41 Billboard top-10 country albums, the most for any artist, and 25 of her songs have topped the country music charts, tied with Reba McEntire for the most for a female musician. One of only seven women to win the CMA Entertainer of the Year Award, Parton was also inducted into the Country Music Hall of Fame in 1999. 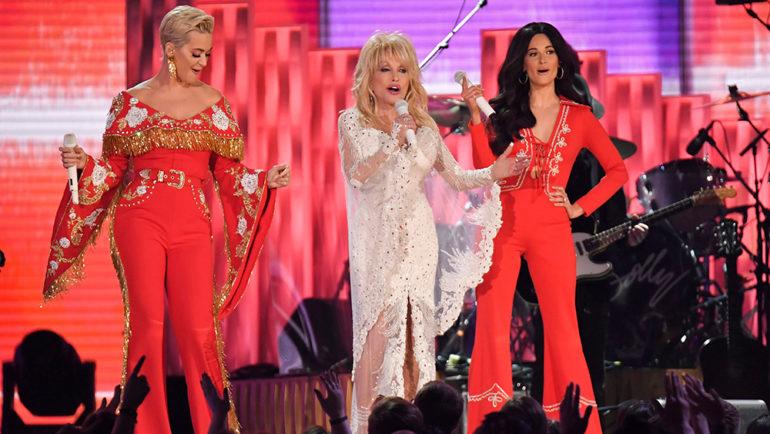