Diversity Is Making Strides Throughout the U.K.’s Entertainment Industry

LOS ANGELES (Variety.com) – When rapper Stormzy landed a headlining slot at the Glastonbury Festival last summer, black British music took center stage and set the cultural agenda in the U.K. The film and television industries haven’t had many of those defining moments — and there was outrage as BAFTA recently unveiled an all-white acting nominations list for its 2020 film awards. But with a slew of major projects featuring diverse talent, there are hopes that change is afoot.

Movies such as Gurinder Chadha’s “,” about a British Pakistani teenager’s love of Bruce Springsteen, and Rapman’s “Blue Story,” a tale of friendship amid gang conflict, are registering critical acclaim and commercial success at the cinema. Series like “Top Boy” are winning eyeballs. Diverse rising talent is breaking through — and helping ensure that what appears on screen better reflects modern, multicultural Britain to audiences at home and around the world.

The new wave is following in the footsteps of Steve McQueen, Riz Ahmed, Gemma Chan, David Oyelowo, Michaela Coel, Dev Patel and Idris Elba, who have cemented their place in the entertainment world. Ahmed, the Emmy-winning star of “The Night Of,” points out that the infrastructure exists now for stories and talent of all stripes. “There’s a different storytelling landscape. There are different distribution and streaming networks. An incredible amount [of content] is being made,” he tells Variety. The question Ahmed poses is whether projects with ethnic diversity in front of and behind the camera are rising in the same proportion as the overall surge in programming.

Ahmed is the definition of a multihyphenate: actor, writer, producer and musician (he raps under the name Riz MC). But that’s not just about flexing different creative muscles; it also stems from need. “It’s the necessity of self-reliance,” he says. “If there are obstacles in one medium, you can find yourself leaning into another. So if music is a passion, you might see if there’s more space there.”

Having found success in so many areas, he’s determined to bring other talent from underrepresented backgrounds along with him. In 2017, Ahmed delivered an address to the British Parliament on the need for greater diversity. “When you see obstacles, you become mission-driven creatively,” he says. “And part of that mission is making sure you are open and embracing and encouraging other people.”

Like Ahmed, Dhanny Joshi moves between a number of worlds, using his management, music and production smarts. The boss of Big Deal Films has repped former BAFTA rising star and “Kidulthood” actor Adam Deacon and comedian Humza Arshad. Big Deal Films targets TV and digital projects with diverse talent, and has inked a first-look agreement with BBC Studios, the commercial arm of the BBC.

“I was established in the urban scene, which is essentially black music,” Joshi says. “There were so few opportunities in film and TV for minority groups that a lot of talent that is now on screen had some affiliation to music. Adam [and] Humza had that. You see Rapman and his success, and it’s embedded in music and black urban culture.”

Rapman (whose real name is Andrew Onwubolu) found his audience through YouTube, posting rap songs and the “Shiro’s Story” short-film series, which went viral. When he moved into the traditional entertainment system, those followers went with him. “Blue Story,” which he wrote and directed, was a sensation in the U.K. and a hit with critics. “What the film has done is bring out a different audience — people who would not normally go to the cinema,” says Joy Gharoro-
Akpojotor, the film’s producer.

Those mostly young fans mobilized as a real-life drama played out last November around the film, which was yanked by British theater chain Vue, citing violent incidents surrounding some screenings of “Blue Story.” The mainstream media pegged the picture as a “gang movie,” but fans took to social media in droves to point out that it was much more than that, sparking a national debate. “Real word of mouth spread on social media about how beautiful and engaging it was,” says Gharoro-Akpojotor.

Vue reinstated the movie, and BBC Films and Paramount, which backed “Blue Story” financially, defended it throughout the media storm. Crucially, it fared well at the box office. As the industry attempts to enact both transformative and disruptive change, belatedly recognizing the need to be more reflective of the society around it, healthy bottom-line numbers for projects from diverse talent help push that effort along.

“There is an importance culturally to telling [diverse] stories,” says actor Himesh Patel, but “ultimately you have to convince people that they are financially viable as well, there is an audience there, they will pay money to watch.” Now with examples of such success, “there’s no leg to stand on when it comes to saying these sorts of stories don’t work,” says Patel, who stars in the high-end BBC adaptation of the Booker Prize-winning novel “The Luminaries” and will appear in HBO’s new post-pandemic series, “Station Eleven.”

What happens behind the camera is also key to prog­­ress. The number of high-ranking decision-makers and company bosses from diverse backgrounds in the U.K. remains paltry. Among the exceptions are Channel 4 drama chief Caroline Hollick, BBC Films head of development Claudia Yusef and Netflix vice president of originals Anne Mensah. “The way you will get the most exciting and most diverse projects is when you have people in those senior creative and financial decision-making roles who are diverse,” says Mensah, who previously held top drama posts at the BBC and Sky.

Organizations such as Creative Access, Screen Skills and indie producers’ trade body Pact are promoting and training talent from underrepresented groups. The British Independent Film Awards has introduced unconscious-bias training for judges. The British Film Institute, the U.K.’s main movie-funding organization, has its own diversity standards, which projects must meet to be eligible for some of BAFTA’s film awards.

“We are seeing a healthy percentage of productions that have adopted the BFI diversity standards demonstrating good representation of ethnicity on screen,” says BFI deputy CEO Ben Roberts, who will ascend to the CEO post in February. “We know behind-the-camera continues to be more challenging. … This is something we will continue to address with the industry in terms of hiring practices, training programs and easier access to skilled professionals from all backgrounds.”

One beneficiary of BFI funding is “The Last Tree,” the story of a Nigerian-born British boy’s passage into adulthood. It unspooled at Sundance, and won actors Sam Adewunmi and Ruthxjiah Bellenea the prizes for most promising newcomer and best supporting actress, respectively, at the British Independent Film Awards in December. The movie’s locations range from the sun-splashed English countryside to inner-city London to Lagos, Nigeria. “It was a combination of wanting to tell a personal story but also knowing that the way we wanted to tell it was a different proposition from what had been seen as black British cinema,” director Shola Amoo says. “Ultimately it was about the immediacy of the story and a desire to render it in a way I hadn’t really seen.”

A diverse crew helped make that vision a reality. “All you can do is lead by example,” Amoo says. “Look at the work I’ve been doing and the way the production team is broken down. It makes sense to have that myriad of different ideas and different representation, and it all filters into the material.”

The “Last Tree” team used discovery casting to seek out new talent. “Rocks,” another critically lauded coming-of-age drama, took that principle to a new level. Casting started out with 1,300 East London schoolgirls before 10 were selected. The final story then emerged and was refined through workshops and discussions with that group. “What we wanted to do was open the door for those first-time child actors,” producer Ameenah Ayub Allen says.

It was also important to have a team behind the camera that reflected what was being made. “Inclusion meant having a crew who were diverse in different ways — ethnically, socioeconomically,” she says. “And not just the trainees but also at mid-level and with heads of department.”

Ahmed will be front and center — and pulling strings behind the scenes — in 2020. Amazon has picked up Toronto Film Festival title “Sound of Metal,” in which he stars. Also coming from Ahmed are new music, the BBC series “Englistan” and an adaptation of “Hamlet” from his shingle, Left Handed Films.

The film, TV and music star looks forward to the day when the conversation about him and other talent of color finally changes. “I wish people would ask me about my creative process as much as my identity,” he says. 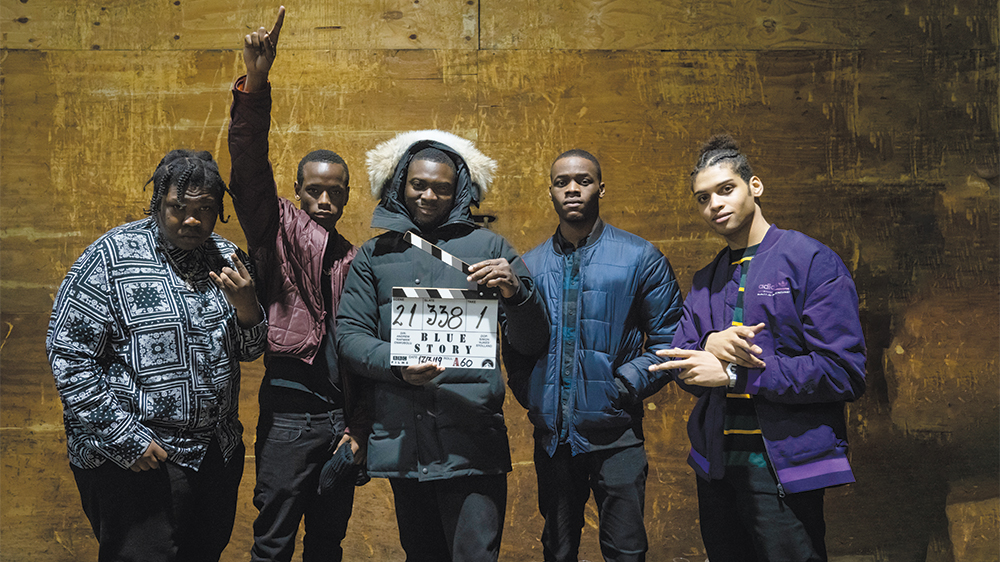