LOS ANGELES (Variety.com) – David Arquette has hung a nearly $5 million price tag on the Encino, Calif., estate he scooped up just shy of two years ago from primetime hospital drama veteran and “13 Reasons Why” teen drama star Kate Walsh for $4.6 million , notably above its $4.25 million asking price. Now listed with Jonah Wilson at Hilton & Hyland , the property was acquired by Walsh in 2013 for a tad over $2.7 million.

Perched privately above the street atop a high, landscaped berm and secured behind a clunky wrought iron fence and forbidding driveway gates on a bit more than an acre, the glammed-up California ranch-style residence was built in 1950. It encompasses four bedrooms and 3.5 bathrooms in roughly 4,300 sq. ft. plus a detached guest cottage with another bedroom and bath. 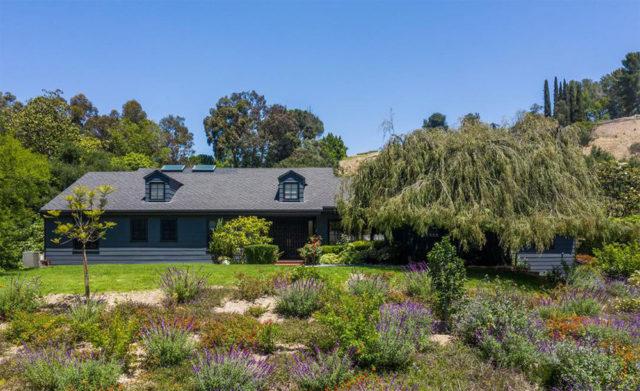 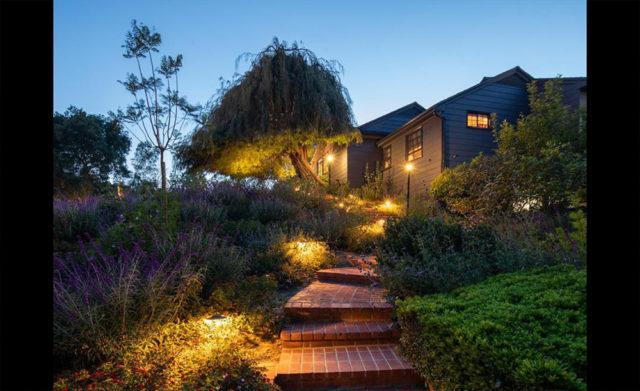 Chock full with bold artworks and an eclectic mélange of furnishings that include a pair of brocade covered armchairs and a boxy, low-profile brown leather sofa, the cavernous living room features a vaulted ceiling crossed by a series of muscular exposed wood beams. The fireplace is set into a shimmering, floor-to-ceiling gold-toned panel and a massive picture window looks out over the lushly planted backyard and swimming pool. A separate dining room centered around a baronial dining table on a lavender rug spills out to the yard through a room-wide bank of telescopic sliding glass doors. In the kitchen, the venting hood over the expensively imported range echoes the gleaming, metallic gold fireplace surround in the living room. There’s a den/breakfast area alongside and open to the kitchen and, tucked behind the kitchen with navy blue walls, a jet-black ceiling punctuated by an integrated speaker system, and a plush, royal blue sectional sofa, a family room/media lounge. 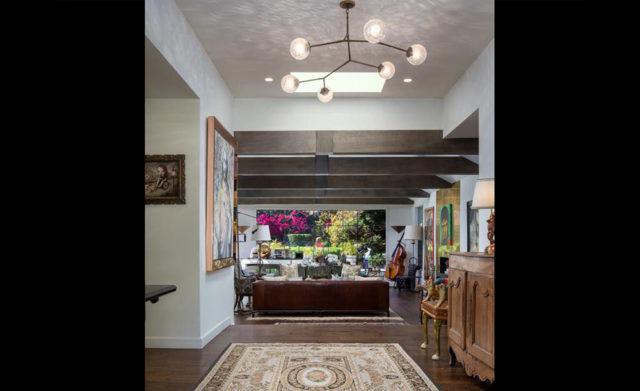 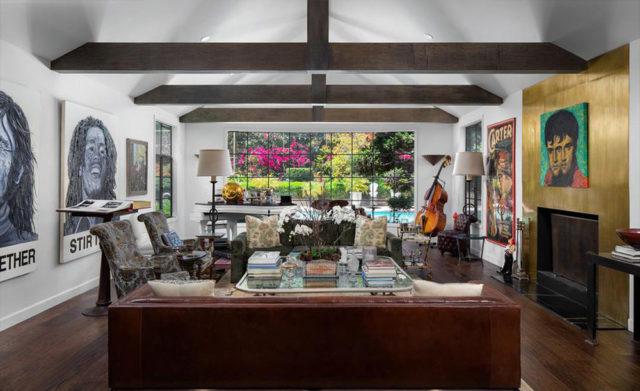 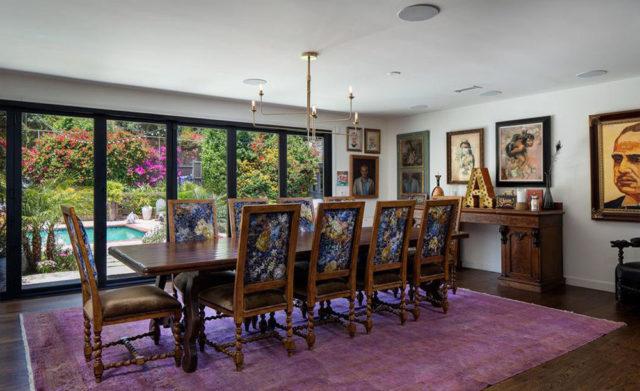 A couple of family bedrooms share a private wing with the multi-room master suite that is replete fireplace and a long wall of glass sliders to a quiet courtyard garden as well as a separate sitting/dressing room and a deluxe, brass-fixtured bathroom where not only the floor but also the walls are sheathed in white marble that runs decadently right up to the ceiling. The estate’s landscaped grounds offer an oversized swimming pool surrounded by extensive terracing and grassy gardens and, tucked discretely behind the lighted tennis court and guest cottage, a pea gravel patio under the massive branches of a mature oak tree strung with fairy lights over several seating areas, a fire pit and, unusually, an outdoor boxing ring. 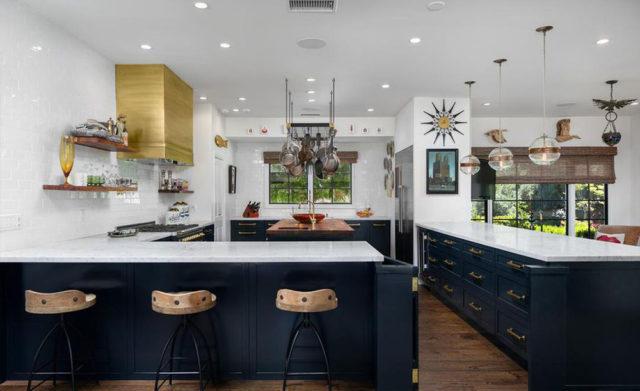 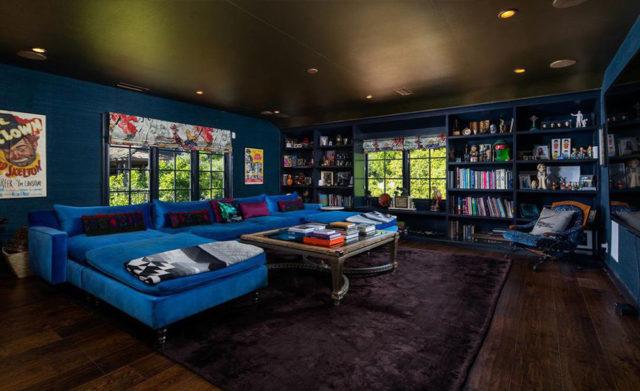 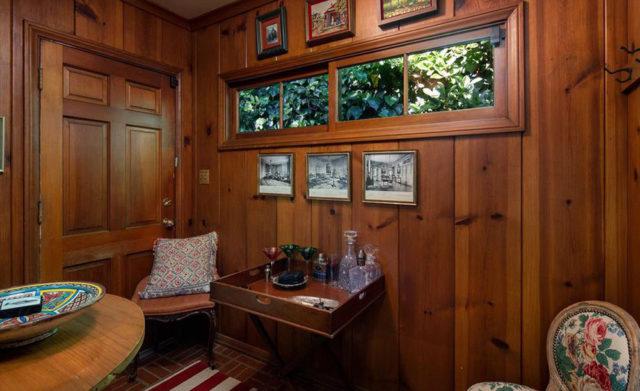 The former “Celebrity Name Game” host and executive producer, a showbiz hyphenate with an array of projects in various stages of production, including the indie comedy TV pilot “ Truck’d Up ” and the upcoming horror comedy feature “ 12 Hour Shift ,” which he’s producing with wife Christina McLarty, previously owned an a much more grand, historic Tudor mansion of almost 10,000 square feet in the posh, Hancock Park adjacent Windsor Square neighborhood of Los Angeles that he picked up in 2014 for $7.15 million and sold just about three years later for not quite $8.35 million . 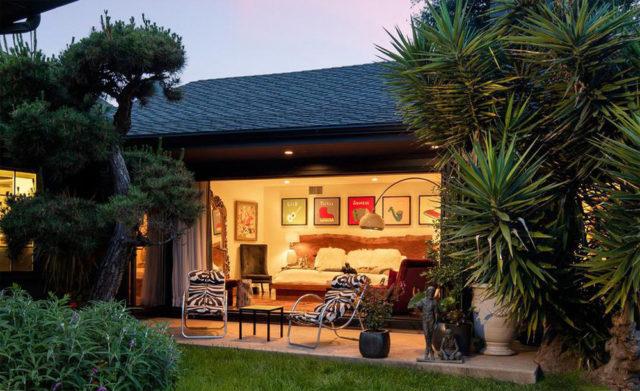 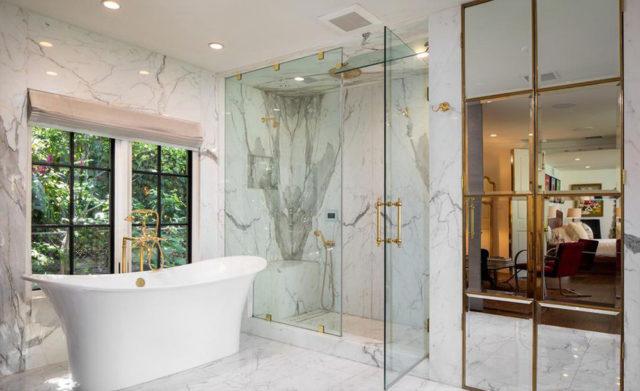 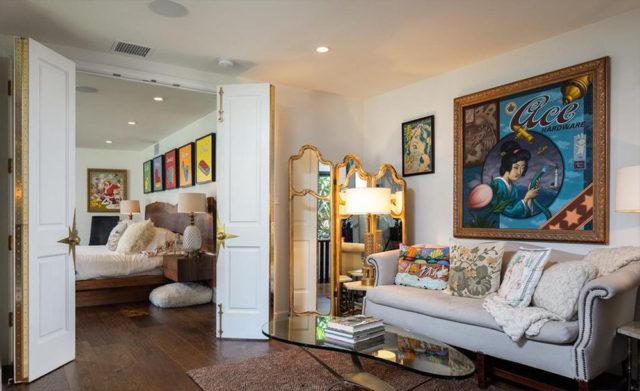 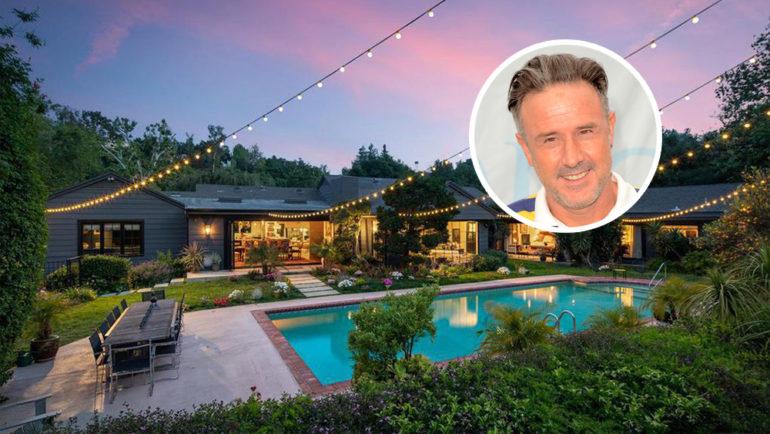