LOS ANGELES (Variety.com) – For many rock fans, a Bob Dylan/Neil Young co-headlining bill is a bucket-list occurrence, a rare opportunity to see two legends for the price of one (very expensive) ticket. That possibility became reality last evening in London’s Hyde Park, where Dylan and Young performed alongside openers Sam Fender, Laura Marling and Cat Power.

The concert was originally part of British Summer Time, an annual event series in Hyde Park, but Young spoke out against the show after tickets were put on sale thanks to its sponsorship by Barclaycard, which the singer called a “fossil fuel funding entity.” Dylan, Young and the supporting lineup keep the show intact, with all tickets valid, but British Summer Time and Barclaycard were removed from the promotion. Young made little reference to the controversy during the performance last night, although after pausing to hydrate he quipped, “Thank you to our sponsors: water.”

Neither Young nor Dylan really addressed the sold-out crowd at all, which spanned over 65,000 people (many of whom made their allegiance to one headliner known with old concert shirts). Young took the stage in the brightness of day, opening his set at 6:30 p.m. alongside his band Promise of the Real. “I’ve never played in daylight before,” the musician joked, stopping at one point to reapply sunscreen. Although Dylan no longer plays guitar live, for Young the Hyde Park show was all about the instrument and its possibilities. He and his musicians, who are led by Willie Nelson’s son Lukas, jammed their way through a set of memorable numbers, including “Country Home,” “Alabama” and “Walk On.” He grabbed his acoustic (and a harmonic) for a set of three songs, “Heart of Gold,” “From Hank to Hendrix” and “Old Man,” midway through, clearly delighting in the crowd’s surging response. Before launching in “Old Man,” the singer grinned, “You wanna hear another one on this?”

He transformed “Love and Only Love,” a track from 1990’s “Ragged Glory,” into a ten-minute jam, and gave a particularly rollicking rendition of “Rockin’ in the Free World” a series of false stops and restarts that urged repeated cheers from the audience. His encore was decidedly more low-key, spanning a final four songs that ended with 1994’s “Piece of Crap.”

Dylan, who emerged 45 minutes later with no fanfare or introduction, took a notably opposite tone. Where Young’s performance was raucous and free, with the musician’s worn flannel shirt whipping in the wind, Dylan was composed and unwavering, sticking mostly to the set he’s been playing on tour all summer. Opening with “Ballad of a Thin Man,” the musician sat behind his grand piano, clad in a sequined hat and white jacket, and performed like he was in a Vegas jazz club rather than an outdoor stage in London. He popped in a few favorites, including “Highway 61 Revisited” and “Like a Rolling Stone,” but the best moments came when the singer settled in to his more emotional tracks. “Girl From the North Country” took on an evocative resonance, while Dylan brought a grit to heartbroken classic “Love Sick” from 1997’s “Time Out of Mind.” “Simple Twist of Fate” was almost unintelligible, a sadly common occurrence during Dylan’s live performances, but his encore rendition of “Blowin’ in the Wind” helped to compensate.

Despite hopeful whispers from fans, Young and Dylan didn’t emerge onstage together at any point. The pair last played together onstage in 1992 in New York and Hyde Park seemed like the perfect place to recapture the moment. Still, the two revered musicians brought the fans something memorable, each smiling broadly during the sets. It was those smiles that said the most, even as neither really addressed the crowd, revealing an acknowledgement that sharing the stage in Hyde Park — albeit separately — is a unique moment in itself. 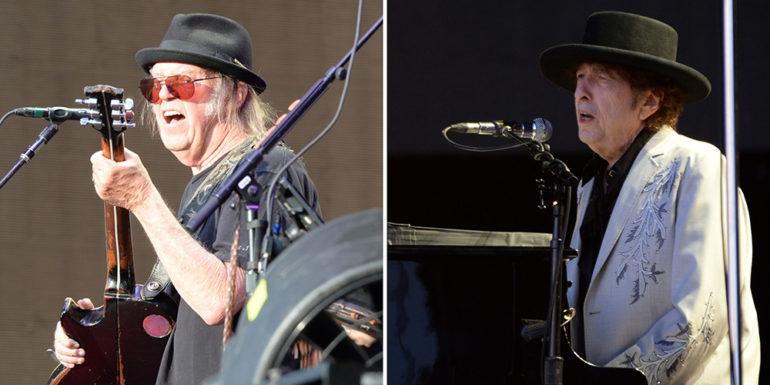