LOS ANGELES (Variety.com) – Kumail Nanjiani’s last-minute “Conan” cancellation left the host scrambling for a new guest. At the eleventh hour, he filled the spot with an impromptu interviewee — his longtime assistant.

Nanjiani was scheduled to appear on the Thursday night show to promote his upcoming comedy film “Stuber.” Half an hour before the taping, Conan O’Brien received the news. “I was having my pre-show nap,” said O’Brien. “Andy was having his bath in heavy cream, and they came in and they said, ‘Kumail can’t get here.’”

O’Brien brought his assistant of 10 years, Sona Movsesian, to take over for Nanjiani. She commented on the situation, “Oh s—, they really ran out of stuff to do.” Movsesian claimed she was unaware she would be interviewed. But for her, that’s par for the course. “That’s kind of like how my job is just regularly,” she said. “No one tells me anything.”

O’Brien spent much of his opening monologue taking jabs at the absentee actor, and recalled only one other cancellation over the course of the show’s 25-year run.
“Liza Minnelli canceled and she’s known — she’s a great artist — but she’s known for sometimes flaking out,” he said. “So Liza Minnelli and, in that same category of troublesome diva, .”

The host continued to playfully spite Nanjiani by refusing to promote “.”
O’Brien said, “If the guy doesn’t show up, we’re not going to show the clip promoting his movie. That’s not how this works.” “Conan” sidekick Andy Richter added, “You gotta show up to get the cookie.”

Instead of showing a clip from Nanjiani’s film, O’Brien decided to advertise what will be “Stuber’s” major competition in its second weekend, “The Lion King.” He presented the promo. “This is a clip for a struggling little movie that I think needs our help,” he joked. “We’re going to try to give it a boost. And we just think that’s fair. That’s karma.”

According to O’Brien, Nanjiani had to cancel due to a shooting schedule “snafu” with HBO comedy “Silicon Valley.” The host showed a video of Nanjiani apologizing in jest with co-star Thomas Middleditch. Middleditch said in the video, “Hey Conan. Sorry Kumail couldn’t make it tonight. It’s my fault, I don’t know my lines.” Nanjiani chimed in, “He doesn’t know his lines.”

O’Brien wasn’t convinced by the video. “Kumail didn’t seem too unhappy,” he said. “There’s not a lot of remorse there.”

HBO had no comment about why Nanjiani wasn’t able to leave the “Silicon Valley” set for the appearance.

Nanjiani tweeted a more sincere apology for skipping out on the show: “@ConanOBrien is my comedy hero. Him and @AndyRichter are the reason I started comedy. So this clip is something I would love if it was about anybody other than me. But it’s about me, so I’m truly mortified.” 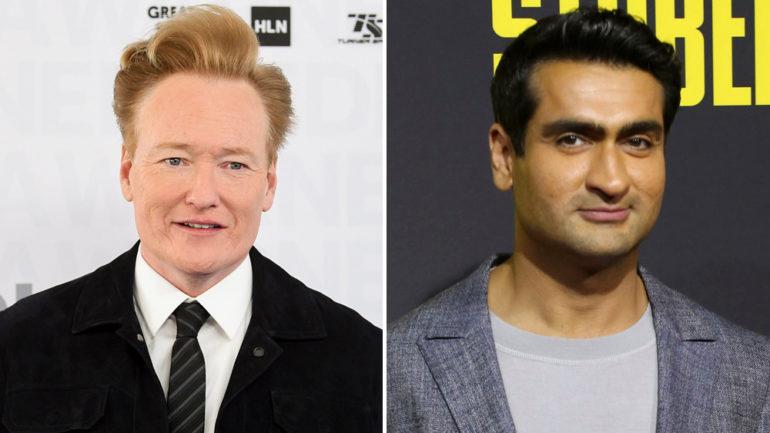