Charlize Theron Gives Back With Africa Outreach Project Fundraiser: ‘One Person Can Spark a Revolution’

LOS ANGELES (Variety.com) – Charlize Theron enlisted a group of Hollywood’s elite and global dignitaries to back a cause near and dear to her heart.

The Oscar winner and United Nations Messenger of Peace founded the Africa Outreach Project in 2007, an organization that champions young people living in Africa by supporting their ability to keep themselves safe from HIV through health, education and community support programs.

“One person can spark a revolution. But it takes a collective community to ensure an evolution,” the South African-born Theron told attendees at the star-studded fundraiser Tuesday night at the Africa Center in Harlem.

“Make no mistake about it. This generation is powerful and can change faster than any of us. They’re ambitious and committed. They deserve a chance. They deserve more than an equitable world. And that’s what we are working towards. It’s with that drumbeat that CTAOP is moving forward. None of us can do this alone.”

“I just think in 2019 we need to care about everyone on an incredibly shrinking planet,” Chef Zimmern told Variety of participating in the event. “The problems in one part of the world are all of our problems now. A hundred years ago that wasn’t the case. It’s vital work that’s really, really important.”

Awkwafina emceed the live auction, with guests willingly throwing up paddles to donate in support. After each winning bid, Theron leapt from her seat and bee lined toward donors to embrace them with warm hugs of appreciation.

As the dessert trays rolled out, the iconic R&B group Boyz II Men — who appeared in Theron’s 2019 comedy “Long Shot” — took the stage and serenaded the crowd with their sweet timeless hit “I’ll Make Love to You.” Wanya Morris handed out long stem red roses to swooning guests and, gently tossing a flower in the air, Theron single-handedly caught the pass, fist-pumping the sky in celebration. The Grammy winners continued their set, getting the audience swaying to the soulful sounds and loudly singing along to “End of the Road” before topping off the night with “Motownphilly,” as the entire crowd (including the host and her entourage) got on their feet to groove in the Africa Center’s grand hall.

After the performance, Theron declared with a huge smile, “I am such a lucky human tonight. Thank you from the bottom of my heart for all of your generosity.” 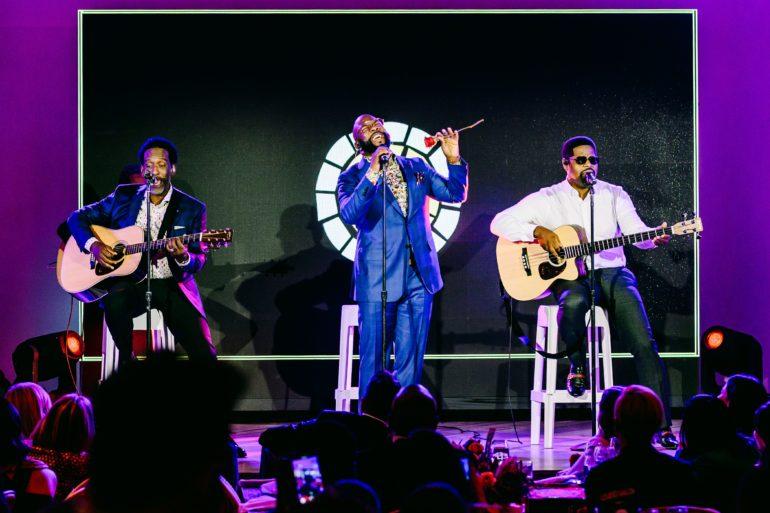