LOS ANGELES (Variety.com) – After more than a year on the market at steadily declining prices that began at a pie-in-the-sky $10 million , Charlie Sheen has engaged the services of new listing agents and re-listed his infamous Beverly Hills mansion with a freshly and steeply discounted number so close to $8 million it might as well be $8 million.

The former “Two and a Half Men” star, who set the mansion out as a luxury rental last year at $43,000 per month and quickly paid off a nearly $90,000 Notice of Default on the property earlier this year, according to tax records, purchased the property in 2006 for $7.2 million. Behind the guarded gates of the Mulholland Estates enclave in the mansion strewn mountains between Beverly Hills and Sherman Oaks, the ornately detailed Mediterranean manse has five bedrooms and six full and two half bathrooms in close to 9,000 square feet. 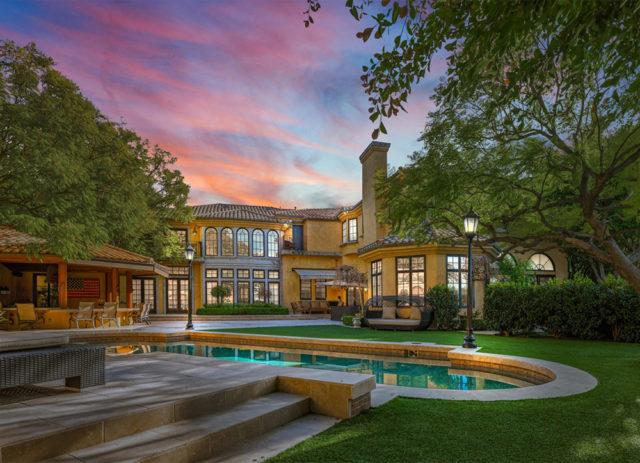 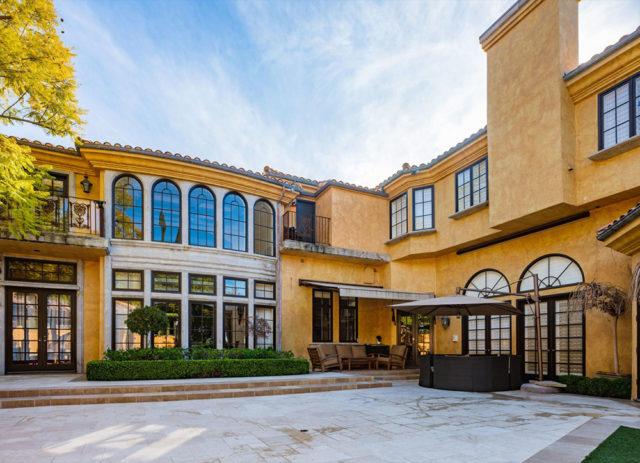 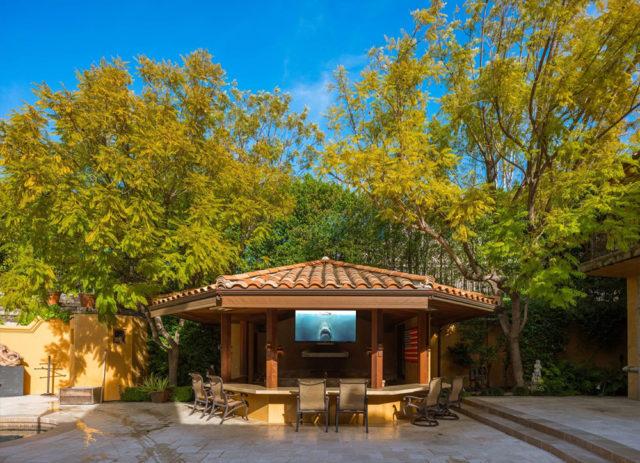 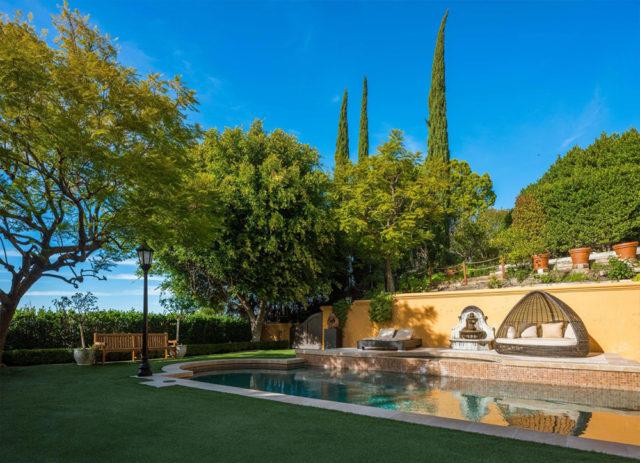 The house is entered through iron accented glass doors that open to an oval-shaped foyer with a gracefully curved staircase. Just inside the front door an office/library features a fireplace and what was probably originally designed as a formal living room is decked out as a plush, 16-seat professional quality theater.

Double height ceilings and a soaring wall of windows define the dining room and, arranged around a center island with updated appliances, the kitchen is high-end in a generic sort of way and opens to an octagonal breakfast nook and a spacious family room with an adjoining bar/games lounge that opens to the backyard. 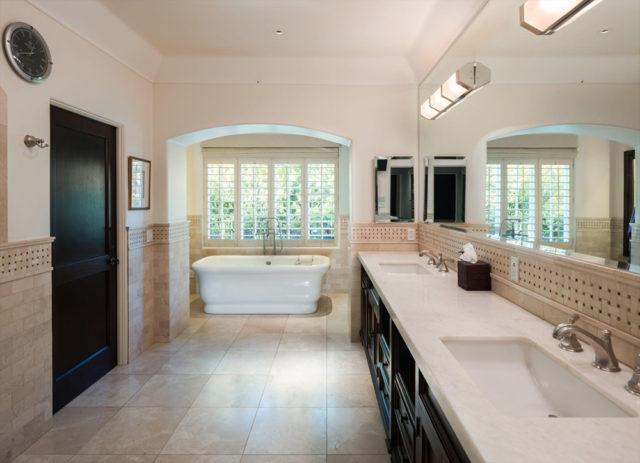 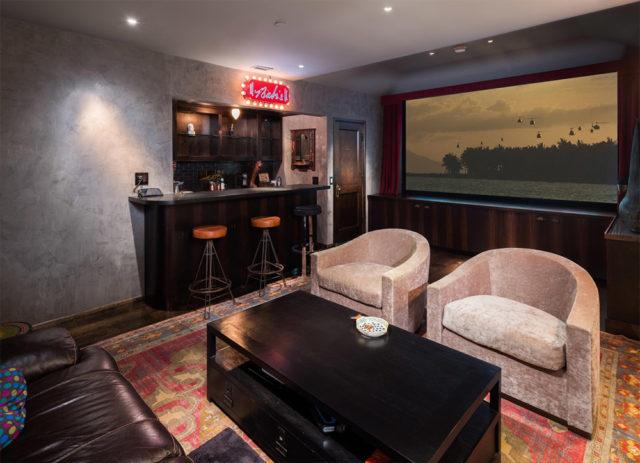 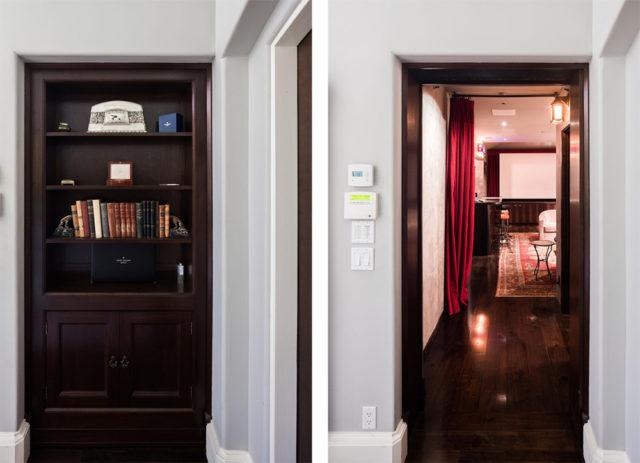 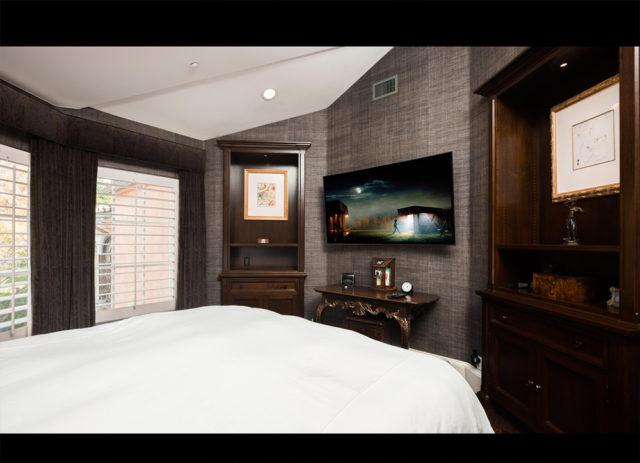 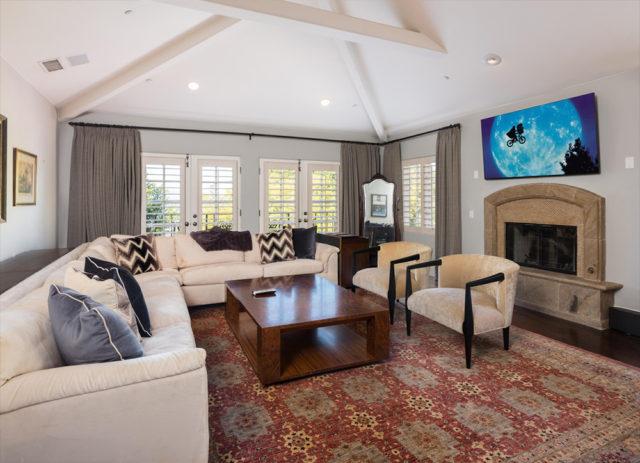 There’s an en suite bedroom for guests or staff on the main floor and three more en suite guest bedrooms on the upper floor, each with a walk-in closet and two with French doors to Juliet balconies. A potential fifth guest or family bedroom is currently outfitted as a home gym with a tanning bed and a full wall of built-ins that hide a secret, walk-in cigar humidor.

The sprawling master suite occupies a private wing of its own and, in addition to the customary walk-in closet and luxury bathroom, incorporates a cozily compact bed chamber, a spacious separate sitting room with fireplace and a hidden, speakeasy-style screening room with wet bar and powder room. 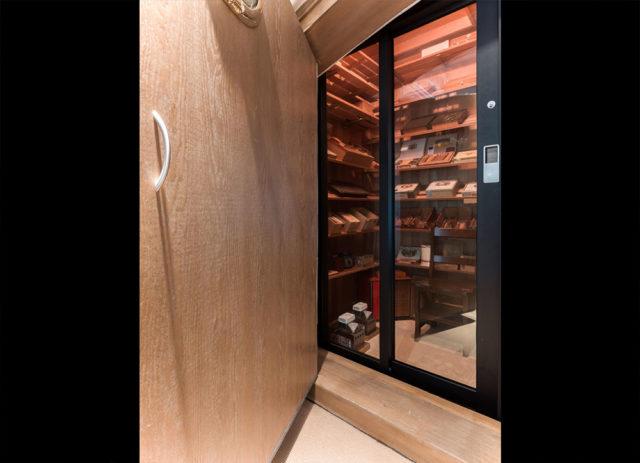 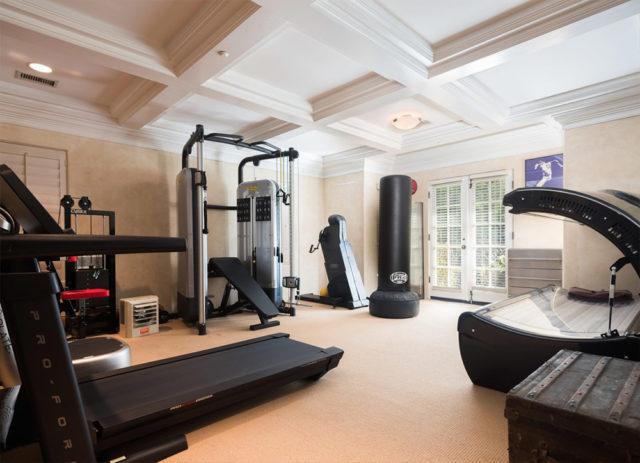 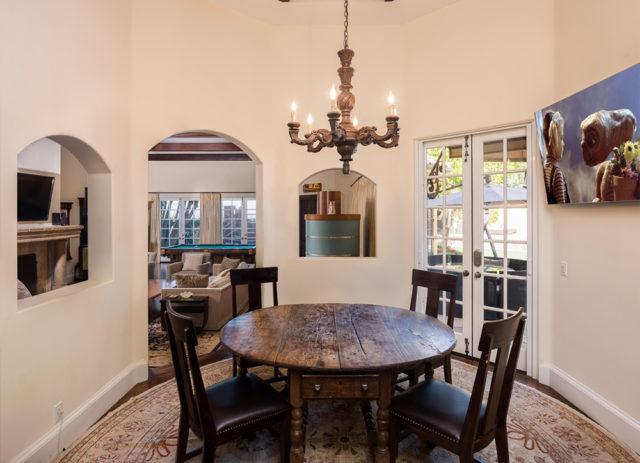 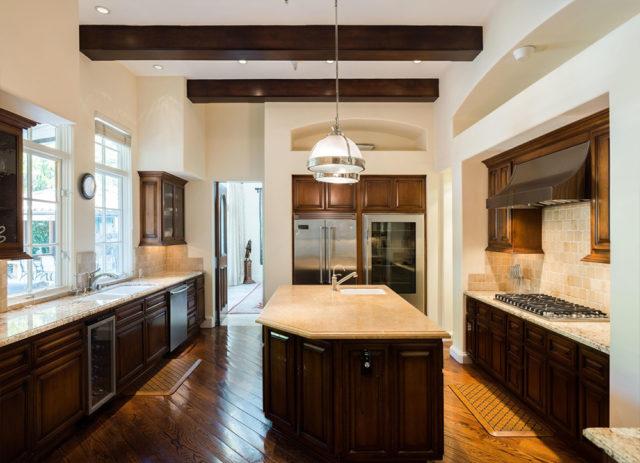 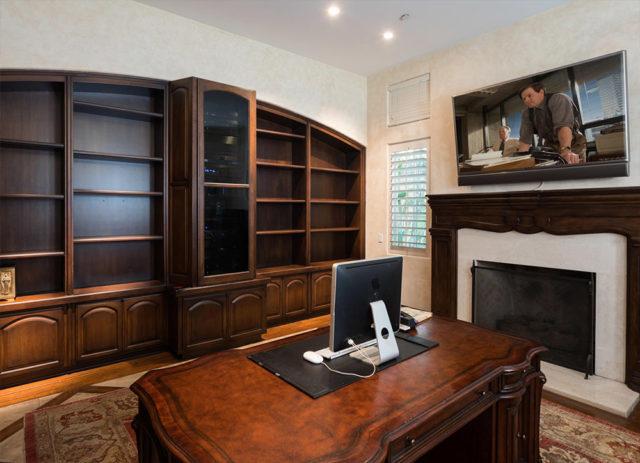 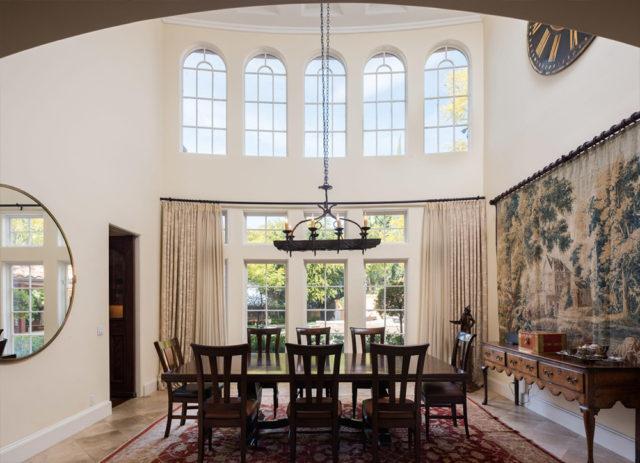 Surrounded by leafy trees and lush foliage, the backyard is designed for al fresco living and entertaining with a swimming pool and spa, a poolside barbecue pavilion and bar, an outdoor shower, a flat patch of evergreen faux-grass and a vegetable garden.

Once the highest paid actor on television, Sheen owned two other luxury homes in the Mulholland Estates enclave. In 2011 he paid Mike Medavoy $7 million for a 9,000+ square foot Mediterranean mansion he sold in 2015 at a punishing $400,000 loss and in 2012 he paid billionaire Tom Gores $4.8 million for another Mediterranean residence that was sold in 2016 for just over $5.4 million to a high-profile Platinum Triangle real estate broker who lucratively flipped it in the following year for a bit more than $8.5 million to its current owner, reality TV scion, fashion model and powerhouse social media personality Kendall Jenner. 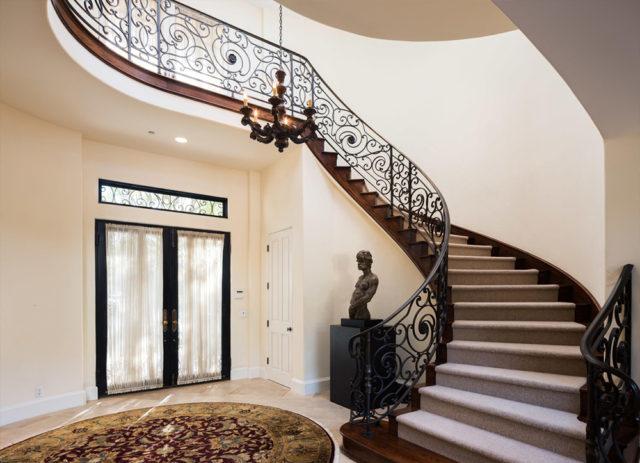 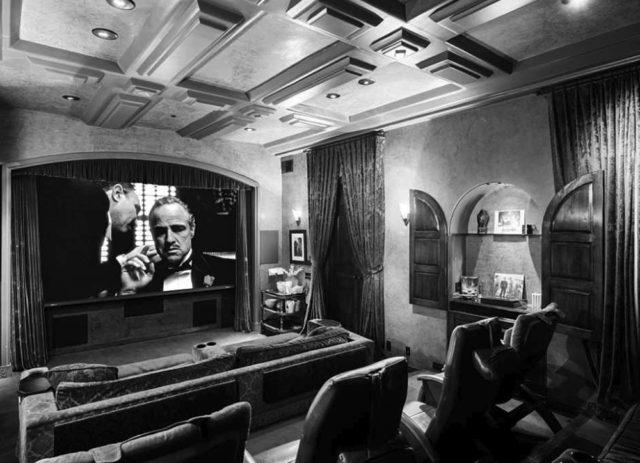 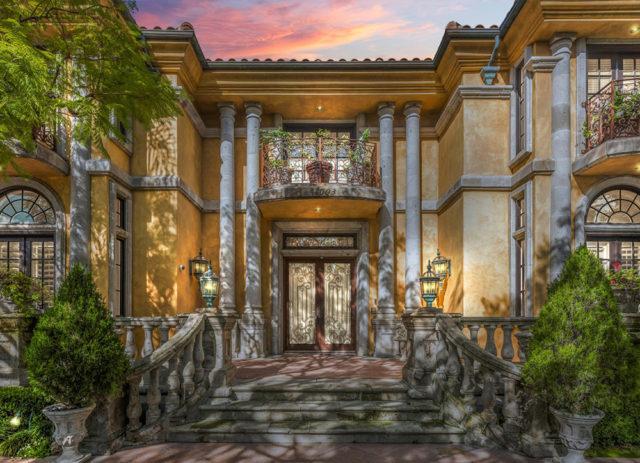 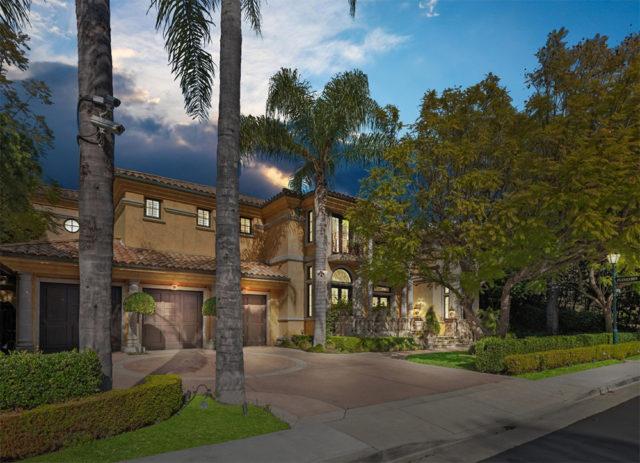 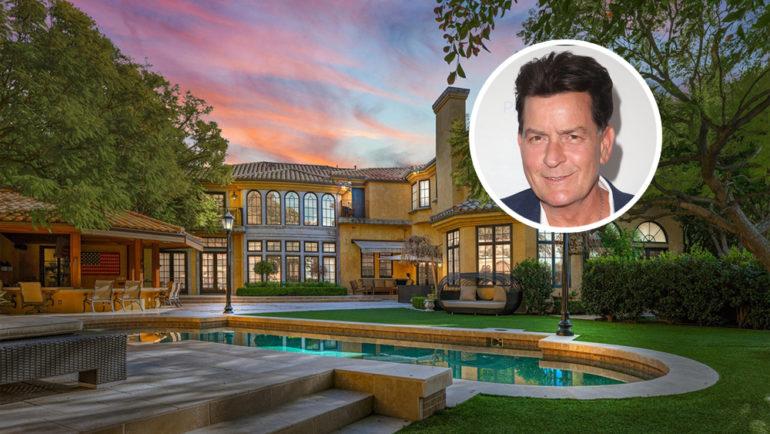