LOS ANGELES (Variety.com) – Let’s take a moment to give Julia Louis-Dreyfus some much-deserved praise. As HBO’s “Veep” ends its run — and aims to add a coda to its already amazing haul over the years at the Emmys — the actress is poised to make history one more time this September.

All signs point to another win in the lead comedy actress category for Louis-Dreyfus, which would make her ninth as a performer overall. That would place her ahead of Cloris Leachman, with whom she’s currently tied, at eight each. Louis-Dreyfus already is in the books for winning the most acting in the same role and on the same series — six, for playing Selina Meyer on “.”

That makes it all the more funny to think that once upon a time there was such a thing as a “‘Seinfeld’ curse.” In the years that followed the 1998 series finale of “Seinfeld,” the show’s supporting cast all went on to star in their own series — to disappointing results. First came Michael Richards, whose “The Michael Richards Show” lasted nine episodes in 2000. Jason Alexander’s “Bob Patterson” aired just 10 episodes in 2001. Louis-Dreyfus’ “Watching Ellie” lasted the longest, at 16 episodes in 2002-2003.

But then Louis-Dreyfus came back swinging: Her follow-up, “The New Adventures of Old Christine,” aired between 2006 and 2010 — squeezing out just enough episodes (88) to even make it into off-net syndication. More important, it earned Louis-Dreyfus an Emmy for lead comedy actress in 2006. “I’m not somebody who really believes in curses,” she told the Emmy audience on stage at the time. “But curse this, baby!”

Louis-Dreyfus was nominated four more times in the category for “Old Christine,” and had previously been nominated seven consecutive years in the supporting comedy actress category for “Seinfeld” (winning once, in 1996). Clearly, TV Academy voters were fans. And “Veep” gave them a reason to lavish her with unprecedented attention.

From the very beginning, “Veep” was an awards machine for Louis-Dreyfus. Even before the show began winning the comedy series Emmy (after “Modern Family” finally got out of the way), she was picking up the win for lead comedy actress. Louis-Dreyfus has taken home that top prize every year she’s been eligible as “Veep” lead, winning in 2012, 2013, 2014, 2015, 2016 and 2017.
Of course, in 2018 “Veep” and Louis-Dreyfus took a year off after the actress was diagnosed with breast cancer (news she found out the day after she received her lead actress Emmy in 2017). Production on the show went on hiatus as Louis-Dreyfus focused on her health, but a year later she announced to the world that she was cancer-free.

“Veep” returned to a world forever changed by the Trump presidency and, to some degree, found it hard to keep up with the real-life absurdity of what’s going on in the White House. But “Veep” was always more than just a political satire, it was a study of human nature — and how vicious it can be. Selina Meyer wasn’t supposed to be likable or competent (although we now can only dream of a leader as polished as her), and Louis-Dreyfus excelled in portraying a believably egomaniacal and slightly sociopathic, yet vulnerable, figure.

“Louis-Dreyfus now wears Selina’s calculating desperation like a second skin, making moments like her ripping apart the new, warm and fuzzier vanguard of her party both familiar and startling in the best ways,” Variety’s Caroline Framke wrote in her review of of the seventh season earlier this spring.

Louis-Dreyfus is up against some stellar competition, including last year’s winner, “The Marvelous Mrs. Maisel” star Rachel Brosnahan. Two other competitors are also previous Emmy winners: “Dead to Me’s” Christina Applegate, who landed the guest comedy actress Emmy for “Friends” in 2003, and the legendary Catherine O’Hara (“Schitt’s Creek”), who was part of the “SCTV Network” team that won for variety series writing in 1982. The category’s other two nominees also are also formidable: Phoebe Waller-Bridge (“Fleabag”) and Natasha Lyonne (“Russian Doll”), both of whom are also up for comedy writing on their respective shows.

But who are we kidding? Those nominees may be amazing, but there’s only one . This is the year she will become the bona fide record-holder for the most Emmys won by any performer in history — and it’s a feat that will likely remain for many years to come. 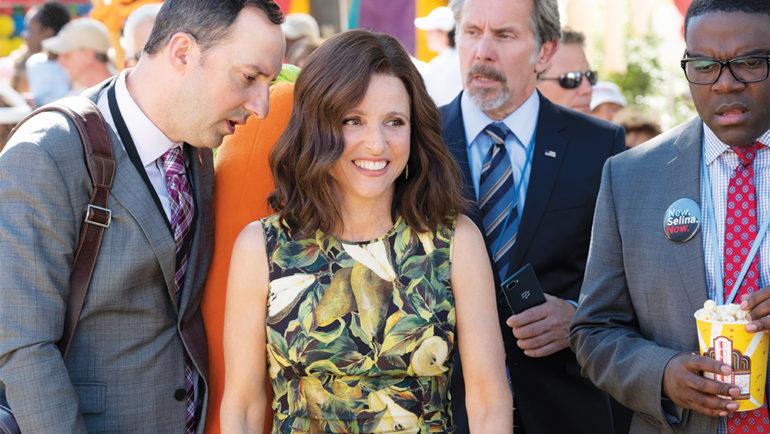