Cardi B Performs ‘Money’ at the 2019 Grammys

LOS ANGELES (Variety.com) – Following an impressive five nominations, Cardi B gave a royal performance during the Grammys telecast at the Staples Center in Los Angles Sunday.

The rapper performed “Money,” a single off the deluxe edition of her debut album “Invasion of Privacy.” Starting off with some smooth piano, it panned to Cardi among a plush set-up with dozens of backup dancers.

Later, Cardi got up on top of the glittering piano, and showed off a massive black peacock tail.

The artist returned to music’s biggest night for the second year, having last year garnered her first two nominations for her breakout single “Bodak Yellow” — one for best rap performance and one for best rap song.

This year was a big one for Cardi, which saw the birth of her first child, Kulture, and later her separation from husband and fellow rapper Offset. Highlighting her career achievements in 2018 in particular, she came in hot under some of the night’s most coveted categories including record of the year for “I Like It” and album of the year for “Invasion of Privacy.”

The “Love and Hip Hop” alum also got a nod for best pop duo/group performance for her guest verse in Maroon 5’s “Girls Like You.” Rounding out her final nomination was her second crack at winning best rap performance, this year for “Be Careful.” 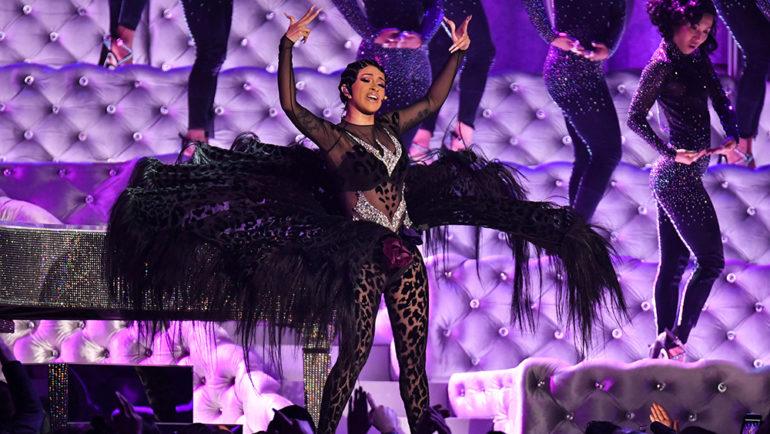