LOS ANGELES (Variety.com) – Bruce Springsteen stunned attendees at the Stone Pony in Asbury Park, New Jersey Saturday night with a two-hour performance at a private event benefiting Boston College. The lucky 400 attendees for the invite-only event got a 22-song set that included hits from his albums “Born in the USA,” “Born to Run,” “Greetings from Asbury Park,” “The River,” a few covers and more, according to Stan Goldstein, co-author of the book, “Rock and Roll Tour of the Jersey Shore.”

Springsteen — who was backed by New Jersey veteran Bobby Bandiera’s band — was joined by E Street Band drummer Max Weinberg mid-show as a surprise, and also by Kings of Suburbia vocalist Layonne Holmes for a cover of “The Boy From New York City.” Weinberg added extra muscle for E Street staples “Rosalita,” “Tenth Avenue Freeze Out” and “Born to Run.”

During “Fourth of July, Asbury Park (Sandy),” Springsteen noted that psychic Madame Marie still has a booth on the boardwalk, and gave a quick plug for guests to check out the nearby Convention Hall. He also gave a nod to to Southside Johnny and the Asbury Jukes with a performance of the Springsteen-penned song, “Talk to Me,” from the Jukes album, “Hearts of Stone.” The full setlist appears below; video shot by Jack Kusner.

“I need shots of tequila,” Springsteen joked before ripping into “Cadillac Ranch.”

The ties that bind Springsteen to Boston College are personal — his son Evan is an alum. Springsteen performed three previous benefits for the school at the Pony in 2009, 2010, and 2011. 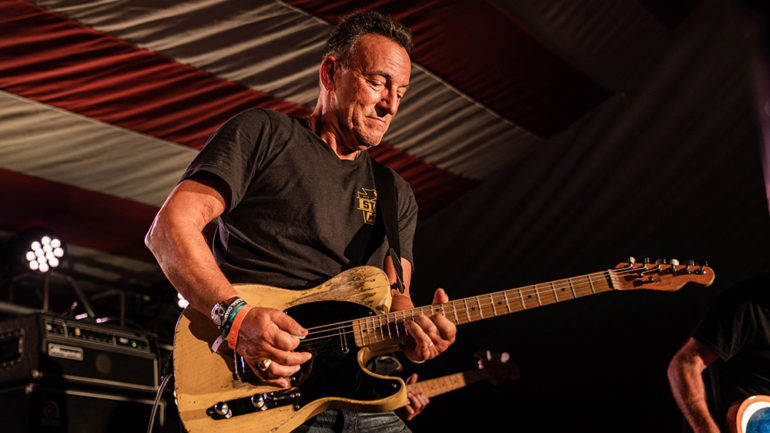