LOS ANGELES (Variety.com) – As James Fletcher Chace in FX Networks’ Getty family drama, Brendan Fraser embodies the quintessential American cowboy. Chace is technically an ex-CIA agent tasked with uncovering the truth about John Paul Getty III’s kidnapping, but Fraser plays him with a looser sense of knowing in a giant Stetson and bolo tie, breaking the fourth wall to speak directly to the audience and invite them into his part of the journey. He commands every scene he’s in, often providing much-needed tonal changes from the otherwise cold Getty family.

Fraser: “As it goes, this character has an element of being prescient or having knowledge of the future in a way. I asked Danny [Boyle, the director] about this when we first met in person — there was one line where he makes mention of a timeline and what the years were: ‘We’re going to take a good, cold look at 1973. … It wasn’t that interesting a year except for this one unusual thing that happened. It’s too late for the swinging ’60s and it’s too early for disco’ — but how does he know it’s too early for disco?

“With the ability to flesh out a character who has certain properties of magic realism, it’s liberating. It allows you to take leaps of the imagination and license with style and furthermore, it’s so much fun to watch the rules of whatever storytelling to get broken.

“Chace has almost a unique ability to speak in soliloquy to the viewers, stepping in and out of scenes, starting conversations in the middle. This is 10 episodes of quite complicated family dynamics and relationships, and it’s helpful to have a narrator or a guide or the court jester, if you will, show up now and then and remind everyone, ‘If you think this is getting confusing, hold on, you ain’t seen nothing yet!’

“It helped for me, to approach something as daunting as that, to put in mind an amalgamation of my favorite people I’ve ever met — the notion of a really good friend who is someone you pick up with right away, if it’s 10 minutes or 10 years since you’ve last spoken to them. That was about the only advice I could give myself — that and ‘Don’t freak out if you catch a reflection of yourself in the lens.’

“There’s a line of dialogue that’s an allegory for what you’re about to behold — ‘It’s 1973, the year of our lord, and the milk is sour.’ Sit back with [it], it’s sour, but drink it anyway. On the day we did that I asked Owen [Harrison], the propmaster, if we could get a real good milk mustache when I drank the milk. And he asked me if I had any allergies, and I said, ‘No, not that I know of.’ And he whipped up something that was like buttermilk, yogurt, clotted cream — I don’t know what it was! It sure made one heck of a milk mustache and it made my stomach do somersaults later on. It was worth it, though.

“I don’t know if Chace ever really wore a Stetson or not, but it makes him stand apart from the others. And as a screenwriting device, it’s important to distinguish each character. He only took it off when things really, really mattered.

“[The hat] I had at the fitting seemed like something you’d wear on the John Deere in the backyard. We didn’t know if it would work, so I said, ‘I know a place, let me take care of this.’ And I went hat shopping at a little western supply store in New Rochelle, and I realized I didn’t really have a toe-hold on the kind of confidence and sense of self and self-assuredness that this character requires to inhabit the world, interact with everyone else, be the go-between with the story and ‘You out there watching, I haven’t forgotten about you’ — that guy. The Stetson made me feel all that. I couldn’t learn my lines without wearing it.” 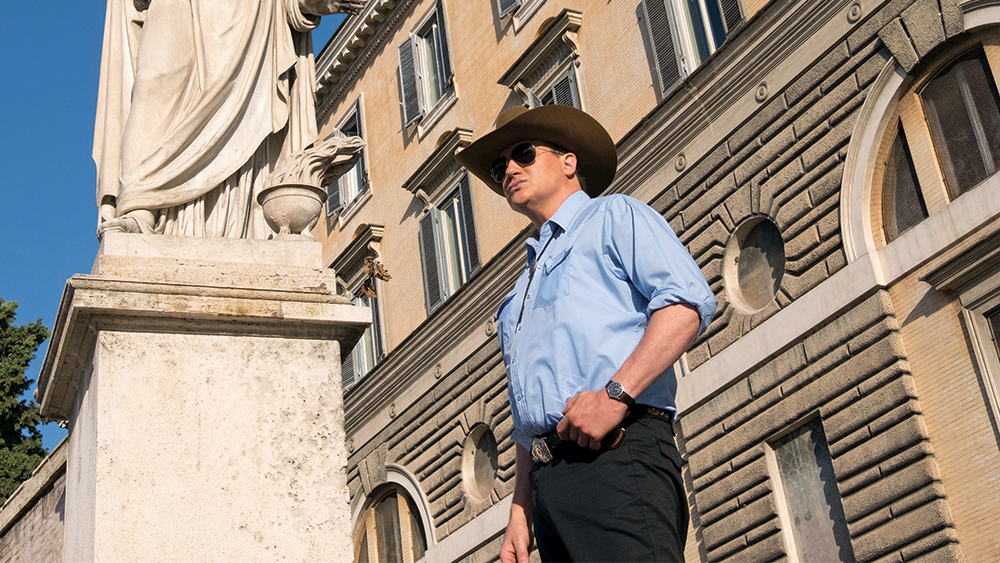