LOS ANGELES (Variety.com) – Netflix has become a destination for television visionaries like Shonda Rhimes and Ryan Murphy, with deals worth $100 million and $250 million, respectively, and top comedians like Chris Rock and Dave Chappelle ($40 million and $60 million, respectively). The streaming giant, which just announced it’s added nearly 10 million subscribers in Q1, is honing in on music, too, landing a three-project deal with Beyonce worth a whopping $60 million, sources tell Variety.

The first of the three specials is “Homecoming,” the behind-the-scenes documentary chronicling her 2018 Coachella performance —  a massive spectacle of dance, visuals and music that reaffirmed ’s moniker of Queen Bey — which premiered on April 17. The price tag on this installment, for which Beyonce Knowles-Carter is credited as executive producer, writer and director, hovers around $20 million. Beyonce’s rep did not respond to Variety’s requests for comment; declined comment for this story, although a source at the company disputed the financial terms of the deal.

According to Vulture, HBO was also interested in the project, having had a long relationship with Knowles-Carter (the cable network aired her 2016 “Lemonade” film as well as her 2014 “On the Run Tour” concert special with husband Jay-Z and 2013 doc “Life Is But a Dream”), but backed out when Netflix came in with a richer offer. (HBO has not responded to Variety‘s request for comment.)

With the release of “,” Beyonce also surprise-dropped a 40-track accompanying album that includes two bonus cuts near the end: “Before I Let Go” and “I Been On.” The former is a  cover of a Frankie Beverly & Maze classic featured in the documentary’s closing credits , while the latter is an updated version of a song that was uploaded to SoundCloud back in 2013. And more music is coming. As Variety
recently reported, the audio to her 65-minute “Lemonade” film, which had only lived on Tidal, the subscription streaming service helmed by Jay-Z, will be available on all streaming services starting April 23. It stands to reason that her future Netflix projects will also include a music companion.

Is the R&B matriarch worth such a hefty price? Considering the press-shy performer rarely consents to interviewers, films like “Homecoming” offer fans an up-close look at Beyonce’s creative mind at work as well as her tireless work ethic. In addition, it allows for a peek at her life off the stage, where she’s mom to three, including twins born 10 months before her performance. “What people don’t see is the sacrifice,” says Beyonce in one of the movie’s many voiceover segments. “I definitely pushed myself further than I knew I could. And I learned a very valuable lesson. I will never, never push myself that far again.” 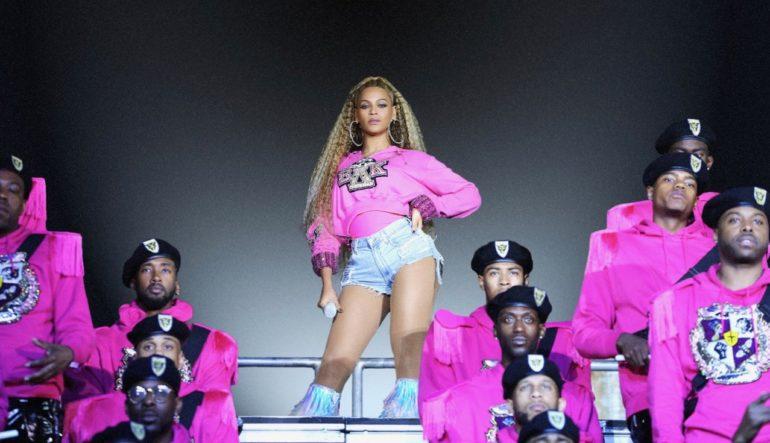