Backstreet Boys Party Like its 1999 on ‘DNA’ World Tour: The Five Best Moments

LOS ANGELES (Variety.com) – Call it a near-flashback. Sitting at Anaheim’s Honda Center, I felt like a teenager in New Zealand watching Backstreet Boys’ “Into the Millennium” tour on a VHS mailed to me by an American pen pal. Mesmerized as the boy band rose up on a platform above a sea of awestruck fans dressed in “Millennium” and “Friends” shirts, it was wildly reminiscent of that time 20  years ago, when the quintet flew onto the stage on hover boards. The opening chords of the record’s swoony ballad, “Don’t Wanna Lose You Now,” the anthemic beats of “It’s Gotta Be You” and the outfit change which later saw them reemerge like they had just stepped out of their “I Want It That Way” video, only heightened the time trip.

The 1999 vibes were felt well before the tour kicked off. There was the group’s 10th studio album, “DNA” debuting at the top of the Billboard 200 chart in February, marking their first number one in almost 20 years. There was lead single, “Don’t Go Breaking My Heart,” landing a Best Pop Duo/Group Grammy nomination alongside fellow 1999 favorites Justin Timberlake and Christina Aguilera. And there’s the Grammy Museum’s “: The Experience,” exhibit.

A Backstreet Boys concert is never short of nostalgia, but the group’s current trek is the most “Millennium”-like show yet, with a set list featuring almost two thirds of the 1999 album. And for fans attending the group’s two Southern California stops (Saturday at Los Angeles’ Staples Center and Monday at Anaheim’s Honda Center) that was just fine. “If you want to continue the party like it’s 1999 again, can I get a ‘Hell yeah?’” Kevin Richardson, 47, enthused, the Pre-2K energy shared by groupmates Howie Dorough, AJ McLean, Nick Carter and Brian Littrell. Read on for the five best moments from Anaheim’s Monday night show.

Fans unaware of the opening act may have been surprised to see a carbon copy of a teenage Littrell performing a solo set. Indeed, it was his 16-year-old son, Baylee Littrell. While it’s not the first time the aspiring country crooner has opened for the boy band, this time he’s all grown up with his own music, fanbase and stage presence, which had fans dancing along and making up their own actions as he performed singles like “Don’t Knock It” and “Boxes.”

Throwing a curveball with the opener, the group swapped party-starting hits like “Larger Than Life” for a remixed intro of “Everyone” from 2000’s “Black & Blue,” which sampled Coolio’s “Gangster’s Paradise” before “I Wanna Be With You,” from their self-titled 1996 debut.

The first four songs all featured the signature melodies of music making legend Max Martin, whose impact on the band was strongly felt, with around half of the set list comprised of songs Martin wrote and produced.

Having established this would be their most “Millennium­”­-heavy tour since the record’s 1999/2000 concert run, the group returned to 2019’s “DNA” with Dorough singing part of “Chateau,” while Carter, 39, belted out some of the poignant ballad, “The Way It Was.” The quintet also performed the album’s raunchiest track, “New Love,” while dirty dancing against a backdrop of seedy, red-light district scenes centered around “Hotel BSB” — unnecessary visuals, but perhaps the group’s way of reiterating they’ve grown from boys to men.

While it wasn’t quite in-the-round like the original “Millennium” outing, the “DNA World Tour” stage features a protruding pentagon, which gives a similar feel once the singers hit the peak. Created with ER Productions, the set-up features lasers, pyrotechnics and the golden ticket which is the “DNA Circle,” a hole in the middle of the pentagon.
The prime spot offers the unique sensation of dancing in the middle of the stage amid the dizzying but welcome dilemma of which way to look when you have 360-degree Backstreet Boys views.. “Remember 20 years ago when you would throw your bras at us? Kevin and I want to return the favor,” McLean, 41, teased, before tossing a Fruit of the Loom memento into the crowd.

Something about the late ‘90s pop scene sparked intense feels, whether it was the fierce rivalry between Backstreet Boys and *NSYNC fans, the deep investment in Britney Spears’ romance with or the tears that flowed as teenage girls finally got to see idols like BSB in the flesh. Most fans have since grown up and adapted to lives that didn’t culminate in marrying Nick Carter, but the boys still evoke the same deep emotion. After 70-odd Backstreet Boys shows, I shed my first concert tear hearing the opening chords of “Don’t Wanna Lose You Now,” having previously given up hope of ever seeing such an old favorite live. My only gripe was that the moment was overshadowed by the band rising so high into the air that they were concealed from the whole front section underneath.

Back in their formative years, the guys regularly performed a capella covers of songs like Boyz II Men’s “End of the Road.” “That’s how we got our record deal, but we didn’t have our own songs,” said 44-year-old Dorough in introducing “Breathe.” “So we had to sing songs by other artists. I’m proud to tell you that today we have our very own a capella song.” While I can’t be alone in thinking it a bit odd that the tune shares the same title as one of their best songs on “In a World Like This,” there was no denying the magic of their combined harmonies as the fivesome huddled around like the good old days with nothing but their voices. 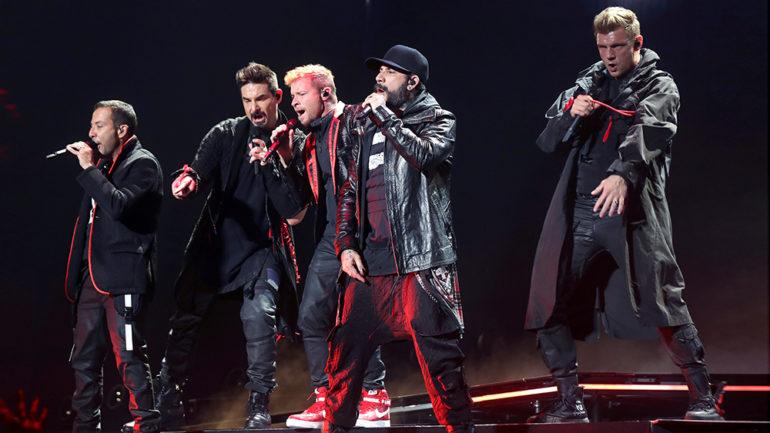