LOS ANGELES (Variety.com) – Anthony Bourdain, the television personality and writer, who shot to fame with his culinary-driven globe trotting, has died by suicide. He was 61.

, the network for which Bourdain hosted the popular “Parts Unknown,” a food-focused travel series, confirmed the news.

“It is with extraordinary sadness we can confirm the death of our friend and colleague, ,” the network said in a statement on Friday morning. “His love of great adventure, new friends, fine food and drink, and the remarkable stories of the world made him a unique storyteller. His talents never ceased to amaze us and we will miss him very much. Our thoughts and prayers are with his daughter and family at this incredibly difficult time.”

According to the network , Bourdain was in France working on an upcoming episode of his CNN series. His friend, French chef Eric Ripert, found him unresponsive in his hotel room on Friday morning. His death comes days after fashion designer Kate Spade hanged herself in an apparent suicide .

Bourdain was better known for his writing and television work than he was for his culinary creations. After toiling for years in kitchens around Manhattan and as executive chef at Brasserie Les Halles, Bourdain hit the big time with the 2000 publication of “Kitchen Confidential: Adventures in the Culinary Underbelly.” The bestseller was hailed by critics for its witty, energetically written look behind-the-scenes of the restaurant industry. The book expanded on a 1999 New Yorker article.

He parlayed his literary success into a gig with Food Network hosting “A Cook’s Tour.” The show introduced Bourdain’s signature programming approach — it followed the chef with the hangdog look, hint of a hangover, and barely disguised five o’clock shadow to exotic ports of call as he sampled local cuisine and introduced viewers to foreign cultures.

It was a concept that Bourdain would revisit to great success on the Travel Channel’s “No Reservations” and “The Layover.” Those programs aired from 2005 to 2013. Bourdain left Travel Channel for CNN, becoming a fixture of the cable news channel’s lineup with “Parts Unknown.” The travel and food series tagged along with Bourdain as he ate grilled pork and noodles with President Barack Obama in Hanoi, examined the legacy of apartheid in Johannesburg, dug into pig ear sandwiches in the Mississippi Delta, and experienced the harvest festival, Gawai Dayak, in Borneo. It was in Borneo that Bourdain was asked and complied with a request from villagers to plunge a spear into the heart of a pig.

In 2013, Peabody Award judges honored Bourdain and “Parts Unknown” for “expanding our palates and horizons in equal measure.”

Often outspoken, with a sharp-elbowed point of view, Bourdain was a critic of sexual harassment in the restaurant industry. He was unafraid to call out chefs he didn’t care for, such as Paula Deen and Guy Fieri, but also effusive in his praise for those he felt were magicians in the kitchen, promoting the likes of José Andrés and Thomas Keller.

He expanded that criticism as the Me Too movement began, frequently championing his girlfriend Asia Argento’s accusations of Harvey Weinstein and his support for sexual harassment victims. When Weinstein was arrested, he wrote “When you went on record, Asia Argento, you were sure this day would never come, that you would be crushed, that you were alone. And yet you did it anyway.”

His blunt style applied to his personal foibles and failings. In his writing, in interviews, and on his show, Bourdain spoke openly of his heroin use, financial difficulties as a struggling chef, and relationship heartaches.

Bourdain said he struggled with celebrity and noted there was a downside to the international exposure his show gave dive bars and hole-in-the-wall eateries.

“If I name the place … I’ve changed it,” Bourdain said in a 2017 interview on Fresh Air . “The next time I go back, there’s tourists. There’s people who’ve seen it on the show. And then I might hear from the same person from that neighborhood say, ‘you ruined my favorite bar,’ you know? All the regular customers have run away and it’s filled with, you know, tourists in ugly T-shirts and flip-flops.”

Bourdain was born in New York City, and raised by Pierre Bourdain, a record executive, and Gladys Bourdain, an editor for The New York Times, in Leonia, N.J. He was married and divorced twice; first, to high school sweetheart Nancy Putkoski, to whom he was married from 1985 to 2005, and later to Ottavia Busia from 2007 to 2016. Bourdain and Busia had a daughter, Ariane, who was born in 2007.

If you or someone you know is considering suicide, please contact the National Suicide Prevention Lifeline at 1-800-273-TALK (8255). 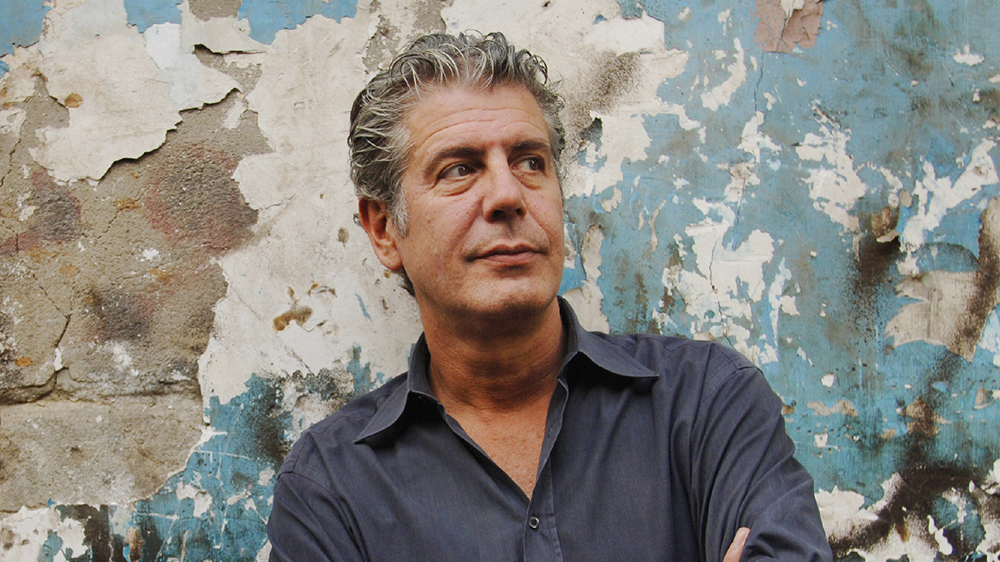