Adam Sandler on Oscar Buzz, Working With the Safdie Brothers and ‘Uncut Gems’ as a ‘Love Letter’ to New York City

LOS ANGELES (Variety.com) – The many, mercurial moods of New York City and the jarring rhythm of its streets have long been among the greatest fascinations of film. “Serpico”and “Dog Day Afternoon,” “Mean Streets”and “Manhattan” all looked to break the frenetic pace of the city and expose, often as brashly as its subject, the virtuosic and irrepressible characters who walk its streets.

“Uncut Gems,” the newest offering by “Good Time” creators Ben and Joshua Safdie, is an unhinged, frenetic study of a New York diamond jeweler, caught in a maniacal and unendurably suspenseful crescendo of gambling debts, adultery, and a last-ditch scheme to unload a million-dollar Ethiopian diamond.

Adam Sandler stars in the film, channeling the same manic and dramatic energy which Paul Thomas Anderson first drew from the comedian in “Punch-Drunk Love.” On the red carpet of the New York Film Festival, where the Film Society of Lincoln Center presented “” Thursday night, Sandler spoke with Variety about grounding his character in the energy of the city.

“It’s a definite love letter to that neighborhood, to 47th street and the Diamond District,” he said. “It’s exciting when you see it; it’s such a big part of New York. It’s a historic place, and not too many things have been shot there. When I prepared for the movie, I learned a lot about jewelry, and I met a lot of jewelers. I learned a lot about gambling, and I met a lot of gamblers. That’s been around a long time, both things. There’s an obsession with it there that I really tried to learn.”

, whose father worked in the Diamond District and beguiled his sons with the cinematic stories of daily life selling jewelry to New York’s wealthiest, have wanted to make a movie about the neighborhood for a decade, first pitching the script to Sandler unsuccessfully in 2012.

According to the comedian, achieving a particular faithfulness to the spirit of the city, occasionally by street-casting real jewelers and diamond sellers, was key to the brothers’ filmmaking. “There were people in the movie, actors that would say, ‘I met those guys four years ago and they told me they liked the way I spoke, they liked the way I looked. They said they were going to use me in a movie and they called me four years later and it happened.’ It means so much to those guys to be authentic,” he told Variety.

“You don’t know where the cameras are sometimes,” Sandler remembered, referring to the brothers’ unconventional style of filming, often done on an open street during regular business hours. “You don’t know what they’re shooting, and sometimes I wouldn’t know if it was a close up or far away. The cameras were in positions that I hadn’t seen before, so I didn’t know what was happening. Every take, every set up you’re working as hard as you can. You never know where you’re at. A lot like New York,” he said.

“The city was founded on, at least once it really got going, money,” said Eric Bogosian, the award-winning playwright of “Talk Radio,” who stars opposite Sandler in the film. “Our president is a New Yorker, unfortunately, but he’s a real New Yorker, and all this emphasis on money, on materialism, and on racism — that’s the millstone around New York’s collective necks, that’s what we worry about far too much or, in the case of racism, not enough. And that’s what the Safdie brothers are looking at here — unfettered expansion and desire.”

While Sandler was notably snubbed by an Academy Award nomination for Anderson’s “Punch-Drunk Love,” “Uncut Gems” has revived the possibility of an Oscar nod.

Soft-spoken, Sandler was humbled on the red carpet by the suggestion of a prospective nomination for his thrillingly dramatic turn. “I don’t even know what to say; it’s nice, but I just want to do as good of a job as I can. I love the movie, and whatever happens, what can I do?” he asked. “It’s neat that they say that, but what can I do? I really loved every day at work. I worked hard. When I do my comedies, I work hard at those. They mean a lot to me. It was no different than when I did this movie,” he shrugged. 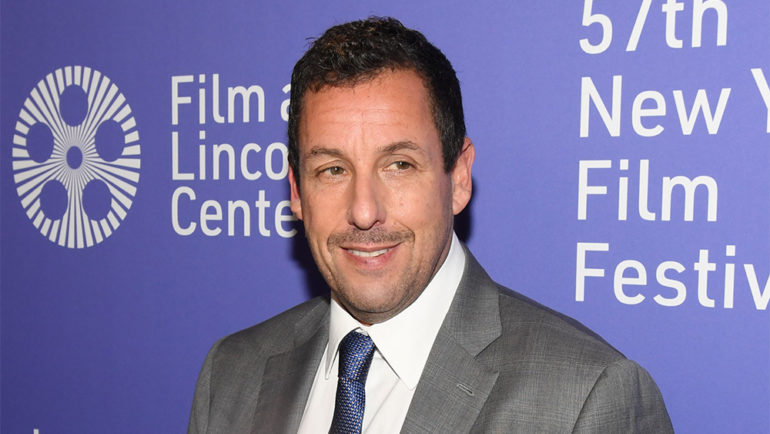