At long last, the titanic estate known as Spelling Manor has found a new owner. Loudly shopped around for at least the last three years, the regional airport-sized property had originally been saddled with a distressingly outrageous $200 million ask, later whacked down to a more reasonable — ahem — $160 million. The final sale price of $119.75 million is far lower still, albeit still unprecedented.

Though the Forbes-listed buyer was widely rumored to be Canadian multi-billionaire Daryl Katz, the ailing owner of the Edmonton Oilers professional ice hockey team, backer of Silver Pictures and a man already well-known for his unabashed real estate splurges, a representative for Katz has denied that he is the Manor’s mystery purchaser. In any case, the nearly $120 million transaction ranks as the most ever paid for a home in the entire state of California, surpassing the $117.5 million Softbank CEO Masayoshi Son spent on his wife’s enormous Woodside estate back in 2012.

Custom built over a period of several years in the late 1980s, the faux-French mega-chateau was dreamt up by television titan Aaron Spelling and his wife Candy. Located on what is arguably L.A.’s most prestigious street, the colossal structure spans 56,500 square feet of living space, dwarfing the neighboring mansions and securing its status as one of the city’s most instantly recognizable homes. It remains the largest private house in Los Angeles County, according to property records.

In summer 2011, several years after her husband’s death, Candy Spelling famously sold the 123-room behemoth for $85 million in cash to 22-year-old Petra Ecclestone, the younger daughter of Formula One racing baron Bernie Ecclestone. At the time of sale, the mansion sported various idiosyncrasies such as a flower-cutting room, a temperature-controlled silver storage closet, a barbershop, doll museum, and several gift-wrapping rooms.

Immediately upon taking possession of the property, Ecclestone hired designer Gavin Brodin to update the rather matronly interiors in less than three months. According to reports, there were up to 500 workers on the property at a time, and the total redo costs exceeded $20 million. The Europeon-influenced contemporary result — velvet sofas and all — was featured in a decidedly tongue-in-cheek W Magazine article.

The double-gated megamansion opens to an aircraft hanger-scaled foyer with a Subaru-sized chandelier hanging over a black-and-white striped marble floor. In addition to all the usual public spaces — living room, family room, dining room, gourmet kitchen — the residential beast also includes a catering kitchen for major events and a mansion-sized basement with a screening room, a two-lane bowling alley, plus a wine cellar and tasting room. And this being L.A., the house naturally includes a massive gym and full spa facilities with a beauty salon, plus massage and tanning rooms.

As for the master suite — or “owner’s complex,” if you will — it weighs in at 7,000 square feet and incorporates a private living room, kitchen, his-and-her bathrooms and a Rodeo Drive boutique-sized dressing room. In all, there are a whopping 27 bathrooms on the premises.

The 4.7-acre estate’s manicured grounds front the swanky Los Angeles Country Club and include a swimming pool, tennis court, formal gardens, an orchard, a reflecting pool, and a large lawn whose grass was ripped out and replaced every year while the Spellings were in residence. Together, the garage facilities and motorcourt can easily accommodate upwards of 100 vehicles.

Although the rumored sale price is $35 million above what Ecclestone paid eight years ago, it remains unknown if she will actually bank any profit at all on this transaction. Aside from the exorbitant renovation costs, property taxes alone ran her some $1.1 million per annum. And then there’s the three dozen staff members she employed to maintain the premises, not to mention the hefty realtor fees. Jade Mills of Coldwell Banker, Kurt Rappaport and Daniel Dill of Westside Estate Agency, and David Parnes and James Harris of The Agency all shared the Manor’s listing. 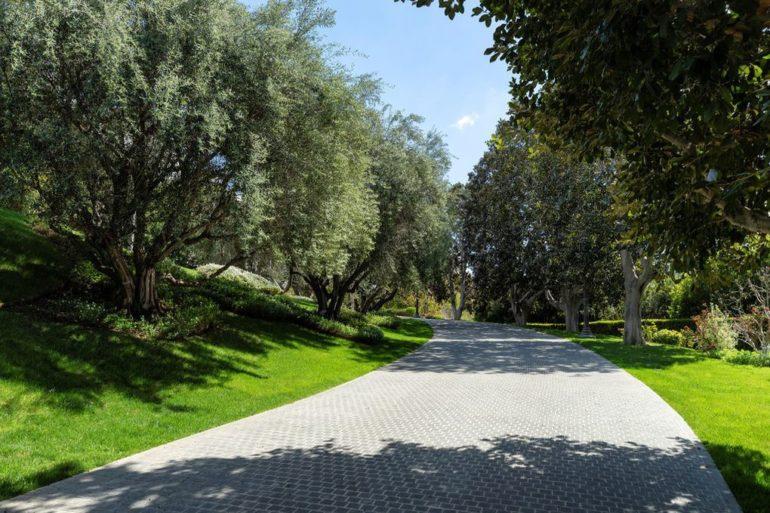