LOS ANGELES (Variety.com) – Millions of people’s Sunday night routines are ruined now that “Game of Thrones” is over, and there are holes in their hearts as big as the hole in The Wall that are aching for a new fantasy series to fill them. Several prequel series are on their way, but as there’s no word on just how long it will be until they hit the small screen, here are a few TV shows filled with magic, monsters and mighty heroes in the works that might have a shot at filling the “” void.

“His Dark Materials” – HBO/BBC One

The HBO adaptation of Philip Pullman’s book series full of daemons and parallel universes will premiere in late 2019, and a second season has already been ordered. “Logan” breakout star Dafne Keen plays Lyra Belacqua, who travels the multiverse with Lord Asriel (James McAvoy) and Pantalaimon, her personal daemon, a creature that bonds to a child and takes the form of an animal that represents her inner being. Lin-Manuel Miranda, Ruth Wilson and James Cosmo round out the cast of the fantastical, coming-of-age tale.

Henry Cavill will ditch the Superman cape and “Mission: Impossible” mustache to take up the steel and silver swords of Geralt of Rivia. The white-haired monster hunter with yellow cat-eyes slays beasts for gold across the Continent using his magical witcher powers. However, Geralt is one of the last of his kind, and most people don’t take kindly to witchers. His stories span Polish writer Andrzej Sapkowski’s novels and can be played through in the video game trilogy of the same name. The Netflix series is set to debut sometime this fall.

The prequel series to the cult-classic fantasy flick by Jim Henson will premiere on Netflix on Aug. 30 and boasts a star-studded voice cast for the puppet heroes. Taron Egerton, Anya Taylor-Joy and Nathalie Emmanuel play three humanoid Gelfling heroes named Rian, Brea and Deet who set out on a journey across the land of Thra to discover the source of the evil reptilian Skeksis’ power and save the world. Mark Hamill, Natalie Dormer, Andy Samberg, Simon Pegg, Keegan-Michael Key, Helena Bonham Carter, Mark Strong and Alicia Vikander will voice friends and foes they meet along the way.

“The Lord of the Rings” – Amazon

Jeff Bezos must be a diehard fan of “Lord of the Rings” because Amazon shelled out $250 million to buy the TV rights to the seminal fantasy series by J.R.R. Tolkien, making it the most expensive show in history. Details are scarce, but the contract required a five-year commitment and for production to begin in two years, so it’s likely to debut in 2021. Like the “Game of Thrones” spinoffs, the series will use the prequel approach and take place thousands of years before the events of the books and films, during the Second Age when Sauron forged the One Ring. Expect to see some Middle Earth denizens, like hobbits, elves and dwarves, plus evil creatures lurking around Mordor, like orcs, trolls and Uruk-hai.

“The Chronicles Of Narnia” – Netflix

C.S. Lewis’ septology has been made into TV shows, movies and even a musical, but this will be the first time a single company has the rights to adapt the entire series. The first book, “The Lion, the Witch and the Wardrobe,” introduced fans to the Pevensies, four youngsters who discover a gateway to the magical world run by Aslan, a talking lion, who needs help fending off the White Witch. The novels span a long stretch of time, so characters like Mr. Tumnus, Prince Caspian and Eustace Scrubb could make it into the show.

The Showtime fantasy series could set itself apart by featuring musical numbers along with its magical adventures. The Patrick Rothfuss books follow a hero named Kvothe, who’s a talented lute player and student of arcane magic. One timeline depicts his early exploits in the fantasy land of Temerant, and another shows him many years later as a world-famous musician recounting his tales as an retired innkeeper. Lionsgate has plans to adapt the novels into a series with “Hamilton” creator Lin-Manuel Miranda as an executive producer, a film directed by Sam Raimi and a video game.

“The Wheel of Time” – Amazon

Beginning production this fall, Amazon has a series based on the late Robert Jordan’s “The Wheel of Time” books, the best-selling high fantasy series since “The Lord of the Rings.” The novels follow Moiraine, a member of a powerful, all-women organization called the Aes Sedai, who finds five young people who could be the Dragon Reborn, a reincarnation of humanity’s savior or destroyer. Traveling the world, the group must use their magical Talents to stop evil factions from exploiting whichever one of them is the prophesied being.

In January, Netflix ordered an eight-episode series based on the first novel in the “Grisha” trilogy by Leigh Bardugo. Living in the Russia-inspired Kingdom of Ravka, orphan Alina Starkov discovers she has the power to summon light, a rare ability possessed only people known as Grisha. Don’t expect to hear the word “magic” on the show, though. The Grisha call their energy manipulation powers Small Science. Due to her powerful abilities, Alina has to watch out for Ravka’s enemies and the hidden agenda of the ominously named Grisha leader, the Darkling.

A new take on the King Arthur mythology from Frank Miller and Thomas Wheeler will likely hit Netflix next year. The upcoming comic of the same name shows the story of Arthur through the eyes of Nimue, the Lady of the Lake who gives the medieval king the sword Excalibur. “13 Reasons Why” star Katherine Langford will play the protagonist, who accompanies Arthur on his journey to find Merlin and fend off the terrorizing forces of his father, King Uther.

Even though “Wild Cards” is a sci-fi superhero series, the books were edited by “A Song of Ice and Fire” author George R.R. Martin, so it had to be on the list. Hulu has plans to create two series based on the collection of stories created by a brainstrust of more than 40 writers. The interconnected books are set in an alternate history where survivors in a post-WWII United States contract an alien virus that rewrites their DNA and leaves only 10% alive. A lucky subset of those gain superhuman powers and are called Aces, while those given less exciting abilities are Deuces, and the unfortunate few with crippling deformities are branded as Jokers. Under his HBO contract, Martin can’t help with the Hulu series, but his storytelling prowess surely rubbed off on the source material. 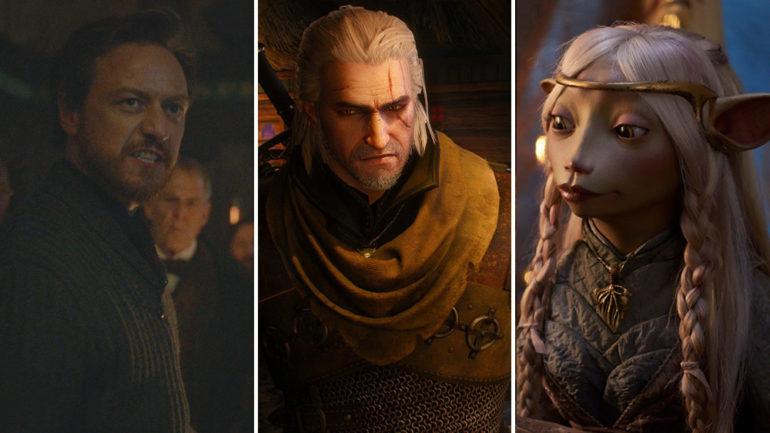